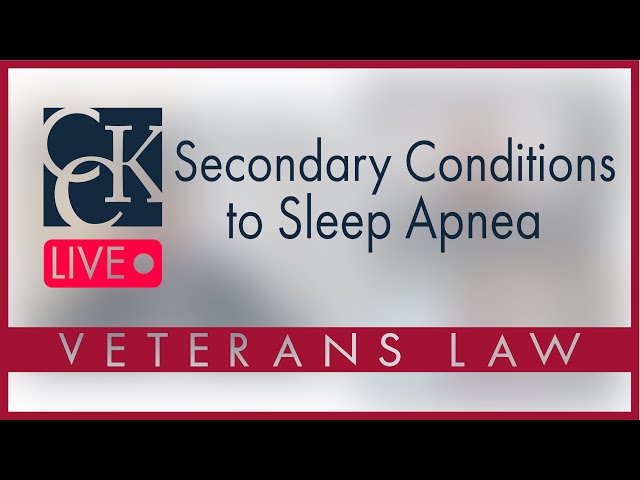 Michael Lostritto: Welcome everyone, to another edition of CCK Live. My name is Michael Lostritto and joining me today, I have Kayla D’Onofrio and Alec Saxe. In this video today, we will be discussing secondary conditions to sleep apnea.

For mild cases of sleep apnea, doctors may suggest simple lifestyle changes, such as losing some weight or quitting smoking, where applicable. But in more serious cases, doctors often prescribe the use of what’s known as a continuous positive airway pressure machine, or what is commonly referred to as a CPAP machine. This machine delivers air pressure through a mask, which a person wears while they sleep.

So Kayla, turning to you, maybe you can get us started with service connection for sleep apnea and different ratings that an individual could expect for the condition.

Kayla: Sure. So, like any service connection process, one thing that VA is going to require before they grant service connection is that a veteran has a diagnosis. For sleep apnea, in particular, VA does require that a sleep study be conducted to confirm the diagnosis, which means that even if your medical records show an existing diagnosis of sleep apnea, VA is not going to consider it sufficient evidence, unless there’s a sleep study that accompanies it to provide that diagnosis from.

Either way, the condition is going to be rated under the same regulation, ii’s going to be 38 CFR 4.97 under the diagnostic code 6847. And this would include any sleep apnea syndrome. So, obstructive, central, or mixed sleep apnea, like Mike just discussed.

Veterans will be assigned a rating of either, 0, which would be a non-compensable rating, 30, 50, or 100% depending on the severity of the condition and the treatment that would be required for that condition, including the prescription of a CPAP machine.

One thing that we do want to note is that VA has recently proposed changes to their sleep apnea rating criteria. The proposed changes, sort of take into account more the symptoms and the effectiveness of treatment. As of right now, those ratings are just proposed, nothing is final, but we do have a video where we go into a lot more detail, a lot more in-depth discussion about those proposed changes on our YouTube channel that we definitely recommend checking out if you are interested in getting more information.

So, veterans struggling with sleep apnea often develop other conditions as a result, some of which can be secondary service-connected. And there are many conditions that this encompasses including but not limited to, I’ll start with asthma. Asthma is a condition that affects a person’s airways and makes it difficult for them to breathe. With asthma, the airflow, the airways narrow and produce extra mucus. This can often interfere with daily life.

And VA rates asthma under the regulation 38 CFR 4.97. This is diagnostic code 6602, and similar to sleep apnea, actually, the ratings range from 0 to 100% — 0, 10, 30, 60 to 100. And veterans may pursue service connection for asthma and a presumptive basis under another separate regulation, 3.317. Specifically, if they served in the Southwest Asia Theater of Operations during certain dates.

It’s important to note that under the regulation 4.96, where there’s long or plural involvement, a single rating will be assigned under the diagnostic code that reflects the predominant disability of the two — of asthma or sleep apnea. And that gets a little technical, but you can hopefully count on VA to rate that right, correctly on the predominant disability. And that will cover it for asthma.

Mike: Yeah, and that last point is a really important one, I think. Oftentimes, we’ll see clients, or at least I have seen the clients who have both conditions and then maybe merit to service connection for both conditions, both diagnoses, but unfortunately, the way the regulation is structured as you just detailed, there’s a specific requirement that VA rate the condition for a single condition based on how severe or whichever condition is more severe.

So, another really common condition that we find that can be linked secondarily to sleep apnea is gastroesophageal reflux disease or commonly known as GERD. GERD is a digestive disorder that occurs when stomach acid flow is back up from the stomach into the esophagus, and this often causes discomfort and inflammation.

Veterans who suffer from sleep apnea may find that the condition aggravates or even causes GERD directly. And this is because while an individual’s asleep, the body may not clear the veteran’s esophagus as it would when the veteran would otherwise be awake and thereby, exacerbating the veteran’s GERD condition. GERD like we said, can also contribute to sleep apnea directly. Typically for GERD, VA rates this condition by analogy, and often, it looks to 38 CFR section 4.114, specifically diagnostic code 7346.

And under diagnostic code 7346, ratings typically range from a 10% rating, a 30% rating, or a 60% disability rating, depending on the presence and severity of a variety of different symptoms that are outlined in the regulation and in, specifically, the diagnostic code. Kayla, do you want to talk a little bit about hypothyroidism?

Kayla: Sure. So, hypothyroidism, or an underactive thyroid, occurs when the thyroid gland doesn’t produce sufficient thyroid hormone. So, what will happen is if a veteran has sleep apnea, they’ll have chronic loss of sleep and that can contribute to more enhanced hypothyroidism symptoms, which might include things like increased fatigue, or poor memory or concentration. Alternatively, hypothyroidism can cause changes to the upper airway if it’s left untreated, which can then lead to or aggravate sleep apnea symptoms. So, kind of the same as GERD, where that relationship can go both ways between sleep apnea and hypothyroidism.

Conditions of the thyroid are rated under the regulation 38 CFR 4.119 and there are several different diagnostic codes under this rating schedule that will just kind of accommodate different thyroid conditions and the symptoms thereof. But another really common condition or common conditions that we see secondary to sleep apnea are mental health conditions.

Any mental health condition can severely impact a person’s well-being and their ability to function in their everyday life. But all mental health conditions are rated under the same regulation, under the same rating criteria, which would be defined under 38 CFR 4.130. And those ratings go from 0, 10, 30, 50, 70, or 100%, depending on the severity of their condition. Again, like those sleep apnea ratings, VA has proposed some changes to the rating schedule for mental disorders. We’re again not going to go into too much detail about that today. But you can check out our other video on YouTube that goes into a lot more detail about some of those proposed changes.

Mike: Yeah. And similarly, with how you mentioned earlier, the, at least the proposed changes for sleep apnea, the changes to mental health condition regulation are really important. So, I really encourage, all of our viewers to take a look at those on our site and just become a little bit more familiar with them and if indeed they do become final regulations.

Alec, turning back to you, sinusitis. Do you want to talk a little bit about that condition and how it can be linked secondarily to sleep apnea?

Alec: Sure. Sinusitis is the condition where a person’s sinuses become swollen or inflamed for three months or longer despite treatment. It affects the nose, the throat, and head, much like sleep apnea. So, the two conditions have been linked and veterans can receive secondary service connection for sinusitis linked to the sleep apnea.

So, chronic sinusitis is also been linked to military burn pit exposure and is now a presumptive condition for veterans who served in qualifying locations and time periods.

Mike: So, although the list that you both have discussed today isn’t certainly exhaustive, I think everyone can see that there are just really a number of different conditions. And there are more, that can be linked secondarily to a veteran’s service-connected sleep apnea. And that can be great for getting additional medical treatment or increased ratings due to the varying conditions.

Kayla: Yeah. So, what would happen is, if a veteran’s service-connected sleep apnea and any conditions related to it or really any other service-connected conditions cause or contribute to the veteran not being able to work, they may be eligible for a benefit called a total disability rating based on individual unemployability, or TDIU. TDIU is another avenue for a veteran to consider to secure a VA disability compensation level at 100%, which basically just means they’re going to be paid at the 100% rate, even if their combined rating isn’t 100%.

So, what that means is that a veteran doesn’t have to be rated at 100% for sleep apnea or for any of the secondary conditions by themselves. All they have to show is that their service-connected sleep apnea, along with any other service-connected conditions, prevent them from securing and following substantially gainful employment. Veterans can qualify for TDIU under the regulation 38 CFR 4.168, provided they meet certain rating requirements, which would be a would call their schedular rating requirements.

Those requirements are that a veteran would have to have one service-connected disability rated at 60% or higher, or if they have more than one service-connected disability, one of those disabilities has to be rated at least 40% and they have to have a combined rating of 70% or higher. So, an example of that might be if the veteran is service-connected for sleep apnea at 50% and PTSD at 30%, their combined rating would be 70% and because the sleep apnea by itself is at 50%, they would qualify for TDIU under those schedular requirements.

Even if a veteran doesn’t meet those schedular requirements; however, they may still be eligible for TDIU on what VA would call an extraschedular basis, they would just still have to show that those disabilities prevent them from securing and following substantial gainful employment in the same way they would in any other circumstance.

Mike: Yeah, and exactly. And we’ve seen in our practice, and I know many others have seen as well, is that seeking TDIU as an extraschedular benefit under 4.16b is oftentimes far more complex and more difficult to get granted for the veteran, unfortunately, then if the veteran were to pursue or otherwise qualify for TDIU benefits under 416a.

So that’s, you know, despite the kind of initial rating threshold requirements that you went through Kayla, it’s oftentimes, if a veteran can meet those requirements, much easier to then get a grant of TDIU, which in and of itself is a reason to sometimes seek service connection for sleep apnea by any means necessary either direct or as we’ve talked about today, a secondary basis.

So, as I mentioned earlier, you know, this is not an exhaustive list by any means of conditions that can be related to sleep apnea. Please, visit our website for a much more comprehensive list, and you’ll find a lot of resources available to you.

So, I think that about does it for today’s video. Thanks for tuning in. We’re glad you could join us, as always. And as always, please be sure to subscribe to our channel on YouTube and follow us on social media.