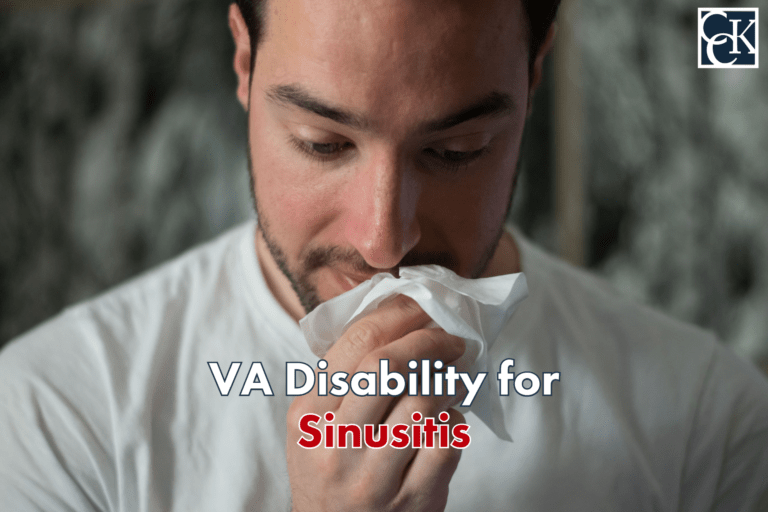 What is Chronic Sinusitis?

Chronic sinusitis occurs when the spaces inside your nose and head (i.e., sinuses) are swollen and inflamed for three months or longer, despite treatment.  This condition is rather common and typically interferes with the way mucus drains, causing your nose to be stuffy.  As such, breathing through your nose may be difficult, and the area around your eyes might feel swollen or tender.  Common signs and symptoms include:

Veterans may develop this condition as a result of their active-duty military service, in which case they may be entitled to VA disability benefits.

Chronic sinusitis can be caused by any number of things that veterans may experience while serving on active duty.  For example, a veteran may suffer facial injuries that result in a deviated septum, which then leads them to develop chronic sinusitis.  In other instances, veterans may be exposed to air pollutants and toxins emitted from burn pits.  Inhaling toxic substances such as asbestos and contaminants can lead to complications with sinus functioning in the future.  Service connection for chronic this condition can be established in several different ways:

For example, veterans can claim that their diagnosed chronic sinusitis is due to their burn pit exposure.  In this case, a healthcare professional would have to provide an opinion stating that the veteran’s condition is “at least as likely as not” due to their in-service exposure.

Veterans who served in specified locations and time periods do not have to prove a connection between their sinusitis and service to be eligible for VA disability compensation.  In these cases, VA presumes a link between service and the condition, meaning that the veteran does not need to prove a nexus.

Recently, the Honoring Our PACT Act has expanded the list of conditions eligible for  presumptive service connection due to toxic exposure.  A veteran may be eligible for this presumption if they have a diagnosis of sinusitis and meet the criteria for “covered veterans.”

A covered veteran is one who served:

Military burn pits are large areas of land that were used by the United States military to incinerate waste in places such as Iraq and Afghanistan in the post-9/11 era.  Though the practice was effective in reducing large quantities of waste, the burn pits emitted large plumes of toxic smoke which was later found to cause many adverse health effects.

Waste materials commonly disposed of in these burn pits include:

At this time, there is little conclusive research on the long-term health impacts of burn pits.  However, the main dioxin released by burn pits is called TCDD and was also one of the major toxins in Agent Orange.

However, VA recently announced that as of August 2, 2021, it will begin processing disability claims for asthma, rhinitis, and sinusitis on a presumptive basis based on presumed particulate matter exposures.  Veterans will only be eligible for this presumption if they meet certain criteria, including service in Southwest Asia and other specified areas and manifestation of asthma, rhinitis, or sinusitis within 10 years of a qualifying period of military service.  Many veterans exposed to burn pits during their service and developed one of these three conditions may be able to seek service connection under this new presumption.

Once a claim has been filed for sinusitis, VA may request a Compensation and Pension exam, or C&P exam.  To do this, VA may call the veteran or send a letter.  It is crucial that VA has your up-to-date contact information so that you do not miss any C&P exam requests.  It is also very important to attend the exam, as failure to attend can result in a denial of the veteran’s claim.

VA rates chronic sinusitis under 38 CFR § 4.97 according to the General Rating Formula for Sinusitis (Diagnostic Codes 6510 through 6514).  The criteria are as follows:

Importantly, an incapacitating episode of sinusitis refers to one that requires bed rest and treatment by a healthcare professional.

Veterans who are prevented from working because of their sinusitis may be eligible to receive a monthly VA disability benefit called total disability based on individual unemployability, or TDIU.  This benefit compensates veterans at the 100 percent rating level, even if their disability rating may be less than that.

If you are unable to win a grant of VA benefits for a condition caused by military service, Chisholm Chisholm & Kilpatrick LTD may be able to help.  Our team of experienced lawyers has the resources and experience necessary to provide support and guidance throughout the VA disability claims process.  Call 800-544-9144 for a free case evaluation.