How Can I Receive VA Disability Benefits After Burn Pit Exposure? 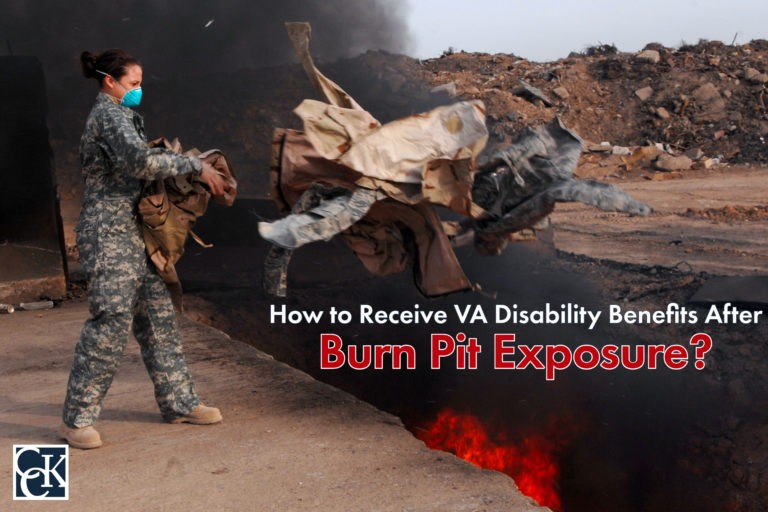 To receive VA disability benefits for a condition you believe to be caused by burn pit exposure, you must prove that your disability was caused by your exposure.

What is a Military Burn Pit?

Military burn pits are large areas of land in which the military and its contractors incinerated all waste generated by military bases, including plastics, medical waste, rubber, and human waste.

The U.S. military used burn pits as part of their waste disposal protocol in places such as Iraq and Afghanistan in the post-9/11 era during Operations Iraqi and Enduring Freedom.  While the practice was effective in reducing large quantities of waste, burn pits emitted plumes of toxic smoke.  This was especially problematic in places such as the Middle East, as the desert wind carried the smoke for miles.

Many U.S. military veterans have suffered health consequences from burn pit exposure.  Most of the negative effects involve temporary ailments of the respiratory system, though evidence suggests a link between burn pit exposure and the long-term deterioration of lung health.

When and Where Were Burn Pits Used?

You may have been exposed to burn pits while serving in any of the following military operations since September 11, 2001:

Researchers continue to amass evidence demonstrating a link between burn pit exposure and a number of severe illnesses, including cancers and respiratory conditions. And while VA has been slow to acknowledge the connection, other government officials have taken notice. The latest was a Labor Department judge who in February 2018 issued a decision ruling that exposure to burn pits caused a military contractor’s lung disease.

Although this ruling does not have bearing on veterans’ claims for VA disability compensation, it represents a possible shift in acknowledging the health impacts of burn pit exposure for those exposed.

How Does Exposure to Burn Pits Lead to Illness?

For many years, the military used burn pits in Iraq, Afghanistan, and Djibouti to dispose of waste on military bases.  The waste materials burned were set on fire in open-air pits and burned.

These open-air burn pits released toxins, carcinogens, smoke, and ash into the air, which then reached the skin, noses, and lungs of those in the vicinity.  Following exposure, tens of thousands of veterans have reported lung diseases and other ailments as a result of their exposure.

Substances Released into the Air by Burn Pits

Joint Base Balad in Iraq was home to a massive burn pit that spanned over ten acres.  Air samples the Department of Defense took from this base revealed particulate matter, polycyclic aromatic hydrocarbons, volatile organic compounds (VOCs), and toxic organic halogenated dioxins and furans in the air.  These substances can cause a slew of serious health conditions.

Toxic Organic Halogenated Dioxins and Furans are a group of toxic chemicals known to cause damage to the immune system, reproductive system, and many types of cancer.  VA is well aware of the damage dioxins can cause because of the military’s use of Agent Orange during the Vietnam War.  2,3,7,8 TCDD, the most toxic dioxin, which also results from the production of Agent Orange, was present in the air at Joint Base Balad.

TCDD was found to be present in the air with both Agent Orange and burn pits; however, unlike with Agent Orange, TCDD was released along with dozens of other chemicals from burn pits.  About two-thirds of the individual chemicals found in burn pits are known as Class A human carcinogens (i.e., cancer-causing substances).  For example, researchers detected significant levels of benzene, which is known to produce various types of leukemia and other disabilities.

To receive disability benefits for a medical condition caused by exposure to a military burn pit, you must file an application with VA.  The application, along with supporting evidence, must show that you have a disabling condition and that a specific event in your military service—in this case, exposure to a burn pit—was the cause.

Demonstrating That You Have a Disabling Medical Condition

The list of medical conditions potentially connected to burn pit exposure is long and includes the following (this list is not exhaustive):


Receiving a grant of benefits from these claims can be especially difficult because VA decides them on a case-by-case basis.

Showing That Your Condition Is Service-Connected

The key to receiving VA disability benefits for a condition due to burn pit exposure is connecting your condition to a specific event in your military service. VA must know exposure to a military burn pit caused your illness. Medical evidence and expert medical testimony can make the connection clear.

Burn pit claims can often be confused or mixed up with Gulf War claims due to overlap between certain time periods and locations.  Sometimes it can be difficult to differentiate between the two, however, Gulf War Illness claims are specifically considered under VA’s Persian Gulf War regulations.  These regulations recognize that certain conditions are due to environmental exposures present during the Gulf War.  The regulations cover service beginning August 1990 and extending through December 2021, though this is planned to be extended.

Gulf War exposures involve several different hazardous toxins, such as oil well fires, nerve gas, insecticides, pesticides, flea collars, and vaccinations.  Burn pits are not included in Gulf War exposures.  It is not currently known exactly what caused Gulf War Illness, or the clusters of symptoms veterans began experiencing upon return, but it was likely due to the multiple toxins in the Persian Gulf area.  The area of exposure related to the Gulf War is far greater than that of burn pits.

What Is the Burn Pit Registry?

Recognizing the growing issue with burn pit exposure and subsequent medical conditions, VA established the Airborne Hazards and Open Burn Pit Registry.  The Registry, which you can access on VA’s website, offers a starting point for building your VA disability claim.  You can add your name to the registry and begin creating a record that you were exposed and later became ill.

That said, participation in the Burn Pit Registry and filing a VA disability compensation claim are two separate things, and one does not influence the other in any way.  Adding your name to the Burn Pit Registry does not initiate a disability claim, nor does it hold your place in the claim queue (wait times for VA disability claims can be long).  The Registry was established by Congress for VA to track service members who were exposed and use the data to identify trends and draw conclusions regarding burn pits’ impacts on service members’ health.

Eligible veterans may complete the burn pit registry questionnaire and an optional health evaluation at a VA medical facility.  This health evaluation, or exam, is a free benefit to which veterans are entitled.  The exam is not a Compensation & Pension (C&P) exam and is not required to receive VA benefits.

The purpose of the registry is to gather information about those exposed in an effort to better determine the effects such exposure may present.  VA acknowledges that the veteran may save and submit notes from the health evaluation associated with the Registry to support their claim.  The questionnaire may also be used to support the veteran’s claim.

What Will My VA Disability Benefit Amount Be?

Your monthly compensation depends on the disability rating assigned to your condition by VA. Possible ratings range from 0 to 100% in increments of 10.

Burn pit exposure claims are complicated and VA often gets them wrong.  When VA gets a burn pit claim, training materials tell VA raters to obtain a medical exam from a physician.  Often times, VA will confuse burn pit exposure claims with other types of claims, specifically those related to Gulf War Illness.  Mistakes like these can be incredibly damaging to claims and present various setbacks for the veteran attempting to secure VA disability benefits.

Additionally, because burn pit claims do not have presumptions of exposure for certain conditions, veterans are often at a loss.  For reasons such as this, burn pit claims have been notoriously difficult for veterans to win.

Although burn pit exposure cases can be a difficult, uphill battle, veterans do not have to go through the process alone.  The team at Chisholm Chisholm & Kilpatrick LTD has the experience and resources to help you fight for the VA disability benefits to which you are rightfully entitled.  To speak with a member of our team and receive a free case evaluation to determine if we can help you, call 800-544-9144.