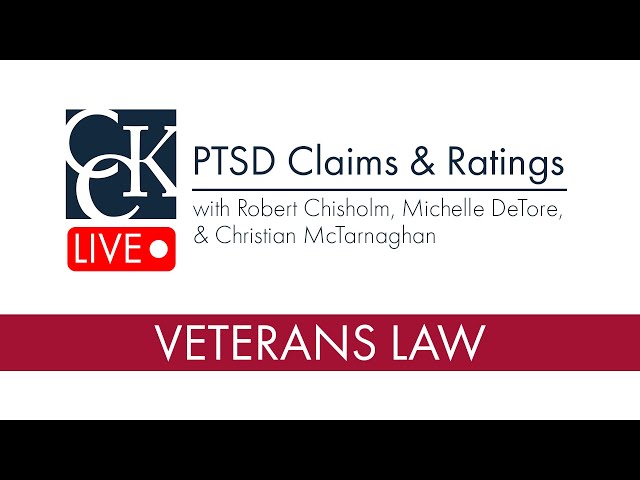 What Is Post-Traumatic Stress Disorder (PTSD)?

Post-traumatic stress disorder (PTSD) is a mental health condition caused by experiencing a distressing, shocking, or otherwise traumatic event. Unfortunately, many veterans experience PTSD stemming from events they witnessed or experienced during their military service. Individuals with PTSD often have flashbacks to the traumatic event they experienced, which can sometimes impact that individual in going about their daily life.

PTSD can be diagnosed by a medical professional, whether it be a therapist, psychiatrist, or general practitioner. It is important to note that symptoms and severity of PTSD vary from person to person.

Stressors and How to Prove Them

A stressor is a traumatic event or incident that caused a veteran’s PTSD, and stressors can come in many different forms. Veterans may also have multiple stressors. When it comes to proving stressors to VA, veterans may have a difficult time. We discuss a few types of stressor circumstances and tools veterans can use to prove them to VA.

If a veteran’s stressor is related to combat, VA has specific regulations for how they must approach the veteran’s claim. If a veteran was in combat during their military service and their stressor stems from that time in combat, VA is supposed to presume that their PTSD stems from their combat service. In this situation, a veteran’s lay statement is usually sufficient to prove to VA that the stressor event occurred. VA will usually check the veteran’s DD-214 to verify that they were in combat, either by looking for certain medals or awards, or a reference to receiving hazard duty pay or eminent danger pay.

For this type of stressor, a lay statement is helpful to lay out the circumstances surrounding the veteran’s fear of hostile military or terrorist activity. Lay statements will need to be consistent with the circumstances, places, and type of service. In this way, it is similar to cases concerning combat exposure discussed above.

However, for these types of stressors, a veteran will usually need a psychiatrist from VA to say that they have a diagnosis of PTSD and that their PTSD is the result of the fear of hostile military or terrorist activity.

A Prisoner of War (POW) is somebody who was forcibly detained in the line of duty by an enemy government or a hostile force. In cases of POWs who have PTSD, their lay statement alone is sufficient to prove their stressor to VA.

What If I Do Not Have Documentation to Prove My Stressor?

If a veteran does not have documentation or is not sure how to go about proving a stressor to VA, sometimes doing some research can help the veteran find newspaper articles, deck logs, obituaries, or pictures that verify their stressor. Veterans can also look online or elsewhere to see what public records are available that can help verify their stressor.

Veterans can also obtain lay statements from fellow veterans who witnessed the stressor event or knew the veteran during service, and can support the veteran’s claim.

For more on evidence and how it can be used in VA claims, watch our video, “All About Evidence.”

Military sexual trauma (MST) is an incident in service where a service member is physically assaulted, or is a victim of battery of a sexual nature, or experiences sexual harassment. MST can serve as a stressor event in PTSD cases. Evidence in MST cases can take different forms than evidence typically used in cases with other stressors. VA recognizes that MST frequently goes unreported in the military, which can leave a veteran without an in-service paper trail to later use in their VA claim. CCK argued a precedential case before the Court of Appeals for the Federal Circuit, and secured a ruling that VA cannot use the absence of evidence of MST as evidence the MST did not occur. Essentially, VA cannot use the lack of a veteran reporting an MST in service as evidence that the MST did not happen.

For more on MST claims, watch our VIDEO “Military Sexual Trauma (MST): How to Get Service Connection.”

What If I Do Not Have a Diagnosis of PTSD?

For diagnoses of PTSD, a medical professional will go through certain criteria to see if a veteran meets what is necessary to be diagnosed with PTSD. One of these criteria is whether the veteran has a stressor event. Some veterans do not meet the criteria for PTSD and may be diagnosed with a different mental health condition as a result.

VA is supposed to take a liberal view (meaning in a way that maximizes the benefit to the veteran) of a veteran’s claim for mental health conditions. In many cases they will send a veteran for a Compensation and Pension examination (C&P), and a VA examiner may diagnose the veteran with PTSD during the exam, or say that PTSD is a more appropriate diagnosis than the one they currently have for depression or anxiety, for example.

What If I Am Diagnosed with PTSD and Another Mental Health Condition?

VA does recognize that this happens. If a veteran claims multiple mental health disabilities, for example PTSD and depression, VA is supposed to, again, take a liberal view of the veteran’s claim and grant the benefit that is most favorable to the veteran.

However, it is important to note that veterans cannot be rated for two mental health conditions.

VA ratings for PTSD mainly focus on the level of social and occupational impairment a veteran experiences due to their PTSD. If a veteran has PTSD but does not experience frequent or severe symptoms that impact his or her ability to go about his or her normal life and work, he or she will be unlikely to receive a high disability rating.

Disability ratings for PTSD range from 0% to 100%, and each rating depends on the veteran’s level of impairment due to the frequency and severity of their symptoms.

VA rates PTSD under 38 C.F.R. 4.130, diagnostic code (DC) 9411. As mentioned, the criteria are based off the level of social and occupational impairment a veteran experiences, and VA uses certain symptoms to characterize that impairment. Each rating lists a number of symptoms, as well as varying severity of those symptoms. However, the general criteria are as follows, according to 38 C.F.R. 4.130:

VA may sometimes focus only on whether a veteran has the listed symptoms under each rating in order to grant a higher rating. However, VA is supposed to look at how the veteran’s symptoms impact their ability to function in social and occupational capacities.

If a veteran’s PTSD prevents them from obtaining and maintaining substantially gainful employment, they could be eligible for Total Disability Based on Individual Unemployability (TDIU). TDIU is a VA benefit that pays veterans at the 100% rate if their service-connected condition(s) prevent them from working but are not already rated at 100%.

A Global Assessment of Functioning (GAF) score measures how much a person’s psychological symptoms impact their daily life, taking into account factors such as risk of self-harm and impairment in communication. The scale ranges from 0 to 100, with 0 being the least severe and 100 being the most.

VA still sometimes relies on GAF scores in their assessment of a veteran’s mental health conditions. After the DSM V came out, VA is no longer supposed to take GAF scores into account (this would be after August 2014).

Unless a veteran is determined by VA to be permanently and totally disabled by their PTSD, VA can reduce their PTSD disability rating if they see that the veteran’s condition has materially improved. Typically, VA will propose to reduce a veteran’s PTSD following a VA examination. In these cases, an examiner may determine that the veteran’s PTSD is less severe than it was in the past, or impacts them less in their daily life.

For more on rating reductions and what VA can and cannot do, watch our VIDEO “ VA Rating Reductions” here.