On Wednesday, August 10, 2022, the President of the United States signed the Honoring Our Promise to Address Comprehensive Toxics (PACT) Act of 2021 into law.  This bipartisan agreement aims to provide improved benefits and health care to veterans suffering from toxic exposure, including Agent Orange in Thailand and burn pits, as well as expand exposure-related research, resources, and training.

The bill had finally cleared the Senate just days prior, on August 3, 2022, following months of delays.  The bipartisan agreement was officially announced by Senate Veterans’ Affairs Committee Chairman Jon Tester and Ranking Member Jerry Moran on May 18, 2022.

What Does the PACT Act Entail?

The Sergeant First Class Heath Robinson Honoring Our Promise to Address Comprehensive Toxics (PACT) Act of 2021 is part of a bipartisan agreement designed to provide “veterans and their families with health care and benefits,” as well as “historic relief to all generations of toxic-exposed veterans.”

Who is Part of this New Agreement?

While this agreement was announced by Senators Tester and Moran, it came together as a part of year-long negotiations amongst Democrats, Republicans, House Veterans’ Affairs Committee members, President Biden’s Administration, and Veterans Service Organizations.

In a joint statement released by Senators Tester and Moran, they acknowledged that veterans have “been living with chronic illnesses as a result of exposures during their time in uniform” for far too long.  The legislation should take “necessary steps to right this wrong,” as well as providing “veterans and their families with the health care and benefits they have earned and deserve.”

What Will the PACT Act Do for Veterans?

According to the PACT Act, the new law:

Breaking Down the Honoring Our PACT Act

Below is a breakdown of the text of the bill and what it means for veterans.

Expands Health Care for Toxic Exposed Veterans and Other Veterans

The bill defines toxic exposed veterans as those who participated in a toxic exposure risk activity while serving active duty, active duty for training, or inactive duty training.  These veterans are now eligible for expanded hospital care (including mental health services and counseling), medical services, and nursing home care for any illness.  Veterans who were deployed in support of a contingency operation are also eligible for these health care services.  Contingency operations include:

VA will also provide health care for veterans who may lack access.  The legislation includes language indicating that VA must conduct a study on access to VBA and VHA benefits in territories and freely associated states of the US – including Federated States of Micronesia, Republic of the Marshall Islands, Republic of Palau, American Samoa, Commonwealth of the Northern Marianas Islands, Guam, Puerto Rico, and the Virgin Islands.  VA will assess deficits in the availability and accessibility of these benefits compared to elsewhere in the United States.

The bill includes a framework that can be used going forward for adding and removing presumptive conditions to VA’s list.  Ultimately, the Secretary of VA “shall determine whether to establish or to remove presumptions of service connection based on toxic exposure.”  However, the Secretary must go through certain steps before making any changes to the presumptive list.

For example, the Secretary will need to give the public an opportunity to comment on proposed formal evaluations to add or remove a presumption.  The Secretary will also need to hear advice from the Working Group, a group consisting of personnel from the Veterans Health Administration and the Veterans Benefit Administration.  The Working Group can provide recommendations to the Secretary about which medical conditions should be added to the presumptive list.

The bill stipulates that “not later than 160 days after the date on which the Secretary receives a recommendation to establish a presumption of service connection,” they need to commence issuing regulations to set forth the presumption and designate, in the regulations, any time frame during which a health effect must manifest.

In terms of removing a condition from the presumptive list, the Secretary shall not consider the lack of evidence as sufficient to support a decision for removal of a presumption.  There are also some safeguards in place for veterans who are awarded benefits based on a presumption that is later removed.  Specifically, these veterans shall maintain entitlement to compensation on that basis, as will surviving dependents receiving DIC benefits based on a presumption that is later eliminated.  Ultimately, no veteran or survivor covered under a presumption shall have their compensation reduced solely because of the removal of an illness from the presumptive list.

Adds 23 Conditions to the Presumptive List for Toxic Exposure

For these eligible veterans, the presumptive list will include:

Specifically, the bill amends 38 USC § 1116 to extend the presumption of herbicide exposure to service members with active military, naval, air, or space service who served in:

If a claim is for Dependency and Indemnity Compensation, or the veteran is terminally ill; homeless; under extreme financial hardship; 85 years old or older; or can show other sufficient cause, then this presumption is effective immediately.  Otherwise, the presumption will be effective on October 1, 2022.

Additionally, the legislation adds monoclonal gammopathy of undetermined significance (abnormal protein in the blood) and hypertension to the presumptive list of conditions for herbicide exposure.  Again, if the claim is for DIC, the veteran is terminally ill; homeless; under extreme financial hardship; 85 years old or older; or can show other sufficient cause, then this is effective immediately, otherwise it will become effective on October 1, 2022.  However, this will only apply retroactively for DIC claimants. 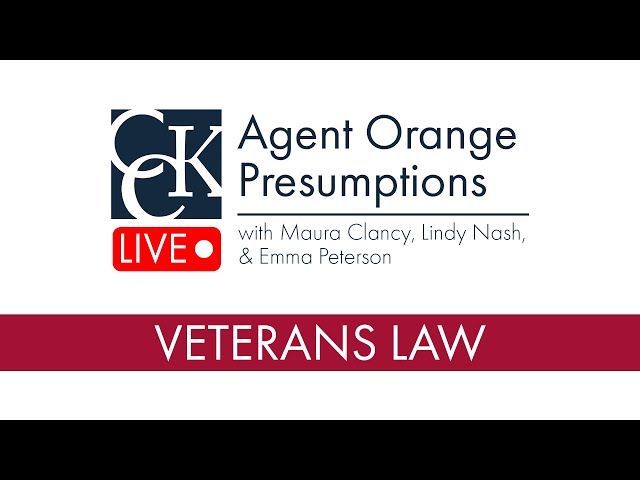 The bill stipulates that VA must also establish and maintain a public website for toxic exposure research (i.e., health consequences of toxic exposures during military service).  This will be coordinated with the War Related Illness and Injury Study Center of VA.

Further, VA is required to publish a list of resources and establish an outreach program that offers information to veterans exposed to toxins in service, as well as to their families, caregivers, and surviving dependents.

VA is required to issue a public report on the health effects of jet fuels used by the military.  It must also identify what fuels were used, where they were used, safety measures taken, and the effects on service members based on length of exposure.

Additionally, VA must conduct an epidemiological study on the health trends of veteran who served at Fort McClellan between January 1, 1935 and May 20, 1999.

Certain parts of the PACT Act will also improve VA’s resources and training.  The legislation also explains how funding may be used to pursue these paths.

Below are some examples:

Other Important Parts of the Legislation

Camp Lejeune – Veterans and other individuals who resided, worked, or were otherwise exposed for 30 days or more between August 1, 1953 and December 31, 1987 to contaminated water at Camp Lejeune may take legal action to obtain financial compensation for harm caused.  These claims will be the exclusive jurisdiction of the Eastern District of North Carolina.  It is important to note that awards granted will be offset by any federal benefits, including VA disability compensation.  The statute of limitations is two years from the date of this Act or 180 days after an individual’s claim is denied.

Persian Gulf War (PGW) – This bill amends 38 USC § 1117 to remove the requirement that a qualifying chronic disability claimed due to PGW service becomes manifest to a compensable degree during the presumptive PGW period, and now only requires that it became manifest to any degree at any time.  It also removes 1117(b), which allowed the Secretary to set the period of eligible service for PGW presumptions.  PGW presumptive locations are now expanded to include Afghanistan, Israel, Egypt, Turkey, Syria, and Jordan.

Now that the legislation has been passed into law, the Act will impact millions of veterans, making it easier for them to prove their disability claims.  To learn more about specific conditions or locations added to VA’s presumptive list, you can visit CCK’s blog.

Chisholm Chisholm & Kilpatrick LTD also offers free consultations to veterans looking for assistance with their VA appeals.  Reach out to CCK today to schedule yours.