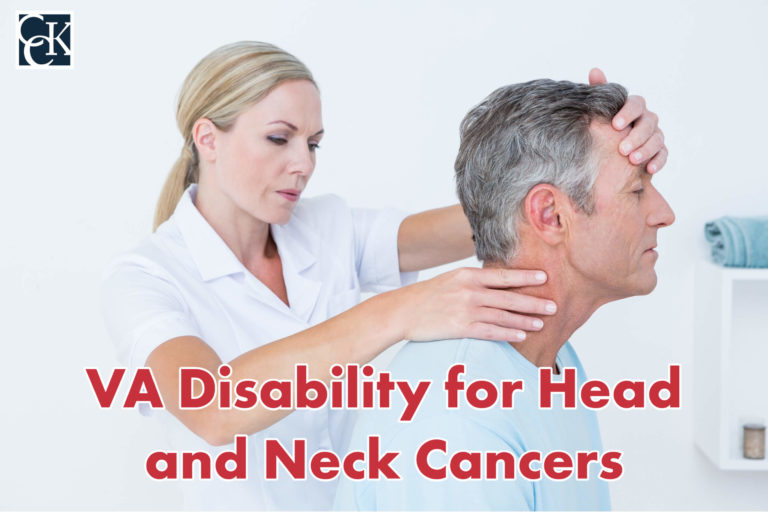 On August 10, 2022, the Honoring Our Promise to Address Comprehensive Toxics (PACT) Act of 2021 added 23 conditions to the Department of Veterans Affairs’ presumptive list for military toxic exposure.  Among these conditions are head cancers and neck cancers.

What Are Head and Neck Cancers?

Generally, head and neck cancer can form in the:

Types of Head and Neck Cancers

Head and neck cancers include (but are not limited to):

Head and Neck Cancers Treatments and Side Effects

Treatments for head and neck cancer may include radiation therapy, chemotherapy, targeted therapy, immunotherapy, surgery, or a combination of these treatments.  A patient’s treatment depends on the location and stage of the cancer, as well as their age and general health.

These cancer treatments may lead to certain side effects and residual symptoms in patients.  For example, individuals who underwent a surgery for throat cancer may find it difficult to chew, swallow, or even talk.  Additionally, following a laryngectomy (i.e., surgery to remove the voice box), a patient may experience numbness in the throat and neck due to certain nerves being cut.

Individuals who receive radiation therapy may experience side effects during and after the treatment, including:

Although many of these side effects will improve over time, some individuals experience long-term effects, such as speech impairment, difficulty swallowing, and skin changes.

Importantly, veterans must demonstrate a connection between their military service and their head or neck cancer.  Veterans can support their claim by securing a private nexus opinion from a medical professional and by submitting lay evidence.  Lay evidence, or lay statements, can be written by the veteran or anyone who knows the veteran and can speak to their condition.

VA may also schedule the veteran for a Compensation and Pension (C&P) exam to determine if a connection exists between military service and the head or neck cancer.  C&P exams are also generally used to evaluate the severity of a condition.

As mentioned above, the PACT Act added 23 conditions to VA’s presumptive list for military toxic exposure, including head cancers and neck cancers of any type.  To be eligible for presumptive service connection for head or neck cancer, veterans simply must have evidence that they served in one of the qualifying locations during the qualifying periods and have a medical diagnosis of neck or head cancer.  This presumption also applies to surviving spouses of veterans seeking retroactive Dependency and Indemnity Compensation (DIC) benefits.

Veterans can qualify for this presumption if they are considered a “covered veteran.”  The bill defines covered veterans as the following:

VA automatically assigns a 100 percent disability rating to veterans with a service-connected active cancer, including head and neck cancers.  This rating continues for as long as the cancer is active, and then for another six months following the successful completion of a treatment program, such as chemotherapy, radiation, or surgery.

Were You Denied Disability Compensation for Your Cancer?

If VA denied you service connection for head or neck cancer, Chisholm Chisholm & Kilpatrick LTD may be able to help.  The accredited attorneys and claims agents at CCK have decades of experience assisting veterans in obtaining their rightfully earned benefits.  We may be able to help you too.