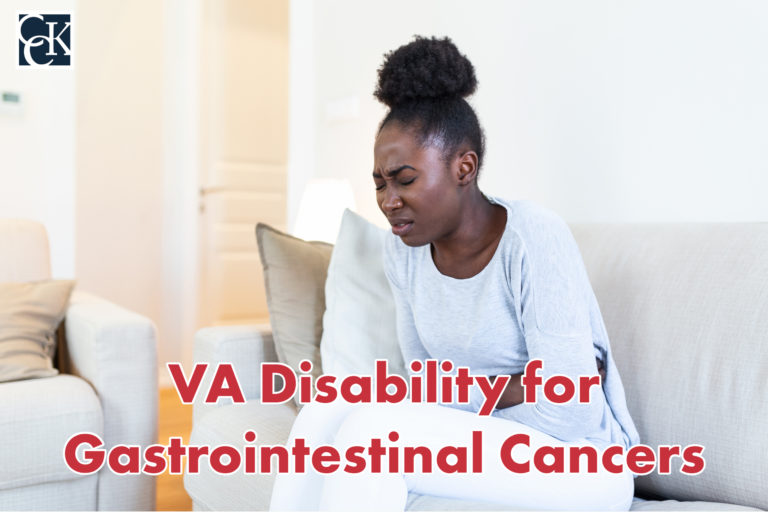 On August 10, 2022, the Honoring Our Promise to Address Comprehensive Toxics (PACT) Act of 2021 added 23 conditions to the Department of Veterans Affairs’ presumptive list for military toxic exposure.  Among these conditions are gastrointestinal cancers of any type.

What Are Gastrointestinal Cancers?

Gastrointestinal (GI) cancers are cancers that develop along the GI tract, also known as the digestive tract.  The GI tract begins at the esophagus (the tube connecting the mouth to the stomach) and ends at the anus (where waste leaves the body).

Common types of gastrointestinal cancers include (but are not limited to):

Treatments for gastrointestinal cancer may include radiation therapy, chemotherapy, targeted therapy, immunotherapy, surgery (i.e., complete removal of the tumor), or a combination of these treatments.  A patient’s treatment depends on the location and stage of the cancer, as well as their age and general health.  Treatments are more effective when the cancer is detected at an early stage; however, this can be difficult.

VA presumes service connection for certain conditions based on the time and location of the veteran’s service.  The intention is to make it easier for veterans to secure disability compensation.

Presumptions eliminate the need for veterans to provide a nexus opinion.  They simply need to show they were at a certain place at a certain time and have a specific condition, and the link between the two is presumed.

To be eligible for this presumption, veterans simply must have evidence that they served in one of the qualifying locations during the qualifying periods and have a diagnosis of a gastrointestinal cancer.  This presumption also applies to surviving spouses of veterans seeking retroactive Dependency and Indemnity Compensation (DIC) benefits.

It important to demonstrate a connection between your military service and gastrointestinal cancer.  You can show evidence of this connection by securing a private nexus opinion from a medical professional and/or by submitting lay evidence.  Lay evidence, or lay statements, can be written by you or anyone who knows you and can speak to your condition.

VA may also schedule you for a Compensation and Pension (C&P) exam to determine if a connection exists.

While VA does not presume gastrointestinal cancers as connected to Agent Orange exposure, veterans can still prove their claim with supporting medical evidence and lay testimony.  VA does, however, include certain cancers on its presumptive Agent Orange list, such as bladder cancer, chronic B-cell leukemias, multiple myeloma, prostate cancer, respiratory cancer, and soft tissue sarcomas.

Veterans can read more about the effects of Agent Orange and establishing service connection for herbicide exposure.

VA automatically assigns a 100 percent disability rating to veterans with a service-connected active cancer, including gastrointestinal cancers.  This rating continues for as long as the cancer is active, and then for another six months following the successful completion of a treatment program, such as chemotherapy, radiation, or surgery.

Was Your VA Claim for Gastrointestinal Cancer Denied?

If VA denied you disability benefits for your service-related gastrointestinal cancer, Chisholm Chisholm & Kilpatrick LTD may be able to help.  The accredited attorneys and claims agents at CCK have decades of experience assisting veterans acquire their rightfully earned benefits.  Call CCK today at 800-544-9144 to schedule a free consultation with a member of our team.