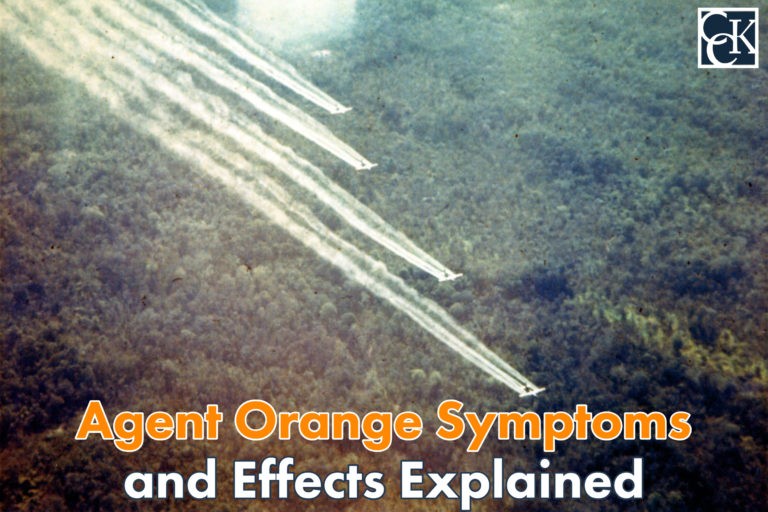 Many medical conditions are associated with Agent Orange exposure.  Diabetes, Parkinson’s disease, and several forms of cancer are among the diseases caused by Agent Orange.  If you were exposed to Agent Orange during military service, you may qualify for VA disability benefits.

The U.S. Department of Veterans Affairs (VA) grants disability benefits to veterans who develop disabilities as a result of their military service.  Typically, a veteran must prove service connection to qualify for benefits.  However, VA presumes service connection if you were exposed to Agent Orange and later developed certain conditions.

Agent Orange and the Vietnam War

Agent Orange is composed of a mixture of two kinds of herbicide agents, 2, 4-D and 2, 4, 5-T.  The highly toxic dioxin contaminant known as 2, 3, 7, 8-TCDD is a byproduct that is produced by Agent Orange.  This dioxin often takes years to break down once it has been released into the environment and can cause a wide array of health effects.  As such, this Agent Orange exposure in Vietnam has caused many serious health conditions for veterans. What Are the Side Effects of Agent Orange?

VA recognizes certain conditions and their symptoms as having a strong association with Agent Orange exposure.  The following Agent Orange side effects are considered presumptive by VA:

The Agent Orange Act of 1991 established presumptive service connection for veterans who served during certain time periods in specific locations and have been diagnosed with one of the above conditions.  In addition, the Honoring Our Promise to Address Comprehensive Toxics Act (PACT Act) of 2021 expanded presumptions related to Agent Orange exposure to include additional locations and time periods.

Presumption of exposure means that veterans who served in these locations, at certain times, do not have to provide the typical elements to establish service connection.  Unlike other claimants, they do not need to show evidence of an in-service event or injury leading to their condition.

How Do You Know if You Qualify for the Agent Orange Exposure Presumption?

How to Prove Agent Orange Exposure

To receive VA disability benefits for Agent Orange symptoms and conditions, you must include the following evidence as part of your claim:

If your medical condition does not appear on the list of presumptive conditions, you may still be able to receive VA disability benefits due to Agent Orange exposure.  However, you will need additional evidence to support your case:

Even if your doctor states that your current condition is due to Agent Orange exposure, VA may still deny your claim.  If this happens, the team of veterans (VA) lawyers at Chisholm Chisholm & Kilpatrick LTD may be able to help.

Veterans who served during the Vietnam War era may also be eligible for an Agent Orange Registry Health Exam.  This exam is free of charge.  The purpose is to “alert Veterans to possible long-term health problems that may be related to Agent Orange exposure during their military service.”

Importantly, this exam is not a Compensation & Pension (C&P) exam and is not required to receive VA benefits.  The Agent Orange Registry Health Exam is based on the veteran’s recollection of service, not their military service records.  VA notes that these exams can help them better understand and respond to the effects of Agent Orange.

Agent Orange Effects Beyond the Veteran

Additionally, evidence has linked Agent Orange exposure to spina bifida, a birth defect in which the spinal cord does not develop properly.  Other neural conditions and nervous disorders in veterans’ children may also be Agent Orange-related.

Veterans with service-connected conditions related to Agent Orange may be eligible for specific health care benefits from VA.

Children of veterans who were exposed to Agent Orange may also be eligible for some healthcare benefits, specifically if they have one of the following birth defects:

In addition to having one or more of these conditions, the child must also be:

The team of veterans lawyers at Chisholm Chisholm & Kilpatrick LTD may be able to help you with your VA disability claims and appeals.  For a free case evaluation with a member of our staff, call us at 800-544-9144.