In some cases, military service in Afghanistan will qualify veterans for the Gulf War presumption.  However, it does not qualify for presumptive service connection for undiagnosed illnesses or medically unexplained chronic multisymptom illness (MUCMI).  Instead, veterans who served in Afghanistan will qualify for presumptive service connection for certain infectious diseases (e.g., malaria, West Nile virus).  Again, if you served during OEF in Afghanistan, you will only be eligible for the Gulf War presumption if you have an infectious disease.

Why Were These Gulf War Presumptions Created?

The presumption holds that if a veteran served in the locations listed above between August 2, 1990 and December 31, 2026, and they experience certain signs or symptoms, VA will presume that the veteran’s Gulf War service caused their condition.  The presumption includes (1) MUCMIs; (2) undiagnosed illnesses; and (3) certain infectious diseases. 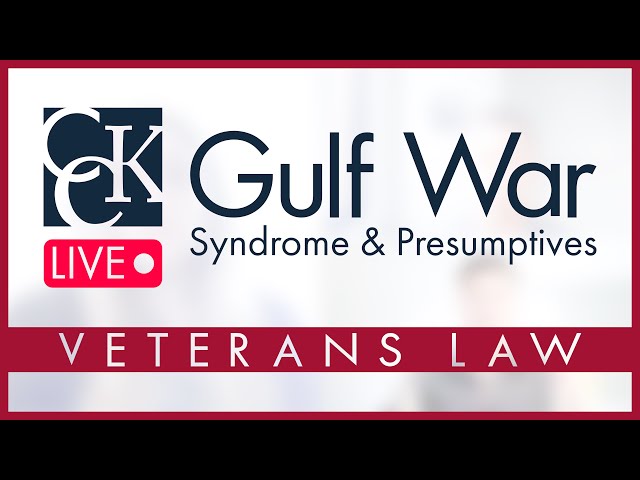 Niether Gulf War Illness, or Gulf War Syndrome, is a specific condition for which veterans can be diagnosed.  Rather, it is general terminology that is used to describe a wide range of symptoms and conditions that Gulf War veterans experience.  Again, these symptoms are classified into three main categories: (1) MUCMIs; (2) undiagnosed illnesses; and (3) certain infectious diseases.

MUCMIs are defined by a cluster of signs and symptoms without conclusive pathophysiology (i.e., the mechanisms by which the disease operates) or etiology (i.e., unknown cause).  Although MUCMIs may be diagnosed, if the diagnosis is partially understood in terms of etiology and pathophysiology, then it will not be considered medically unexplained.  Examples of MUCMIs include:

This category covers symptoms not associated with a diagnosed condition, but that VA has identified as prevalent in Gulf War veterans.  These symptoms include:

What Other Qualifications Must Veterans Meet for the Gulf War Presumptive?

Again, veterans’ symptoms must present either while the veteran was on active duty or prior to December 31, 2021, as of now.  It is possible that the date will be extended by Congress in the future as it has been in the past.  Beyond that, symptoms must be chronic, meaning lasting more than six months.  Furthermore, they must manifest to a degree of at least 10 percent disabling.

Importantly, there are several differences between Gulf War Illness and burn pit claims.  For example, dates of service are very important to keep in mind.  Burn pits mainly affect veterans who deployed following 9/11.  Therefore, burn pits do not fall into the Persian Gulf War time period and subsequent illnesses due to burn pits cannot be claimed under Gulf War Illness.

In other cases, VA adjudicators may disregard MUCMIs altogether.  Namely, they will conclude that a veteran is diagnosed with a specific condition and therefore 38 CFR § 3.317 does not apply because it is not an undiagnosed illness.  However, the Gulf War presumption applies to MUCMIs and infectious diseases as well as undiagnosed illnesses.

What Can Veterans Do to Improve their VA Disability Claim Based on Gulf War Service?

First and foremost, veterans must establish that they served in the Southwest Asia theater of operations.  Therefore, ensuring that VA has your service records demonstrating such service is critical.  If you are a Navy veteran and you served in one of the Gulfs and your personnel records do not establish that you served in those waters, it may be beneficial to obtain your Navy deck logs to see if those can place you in that area.  From there, it is important to establish that your condition meets the rest of the requirements for the presumption discussed above (see section “What Other Qualifications Must Veterans Meet for the Gulf War Presumptive?”).  Veterans can do so by submitting medical records, treatment notes, and doctors’ opinions.