Generally speaking, tinnitus refers to the perception of noise or ringing in the ears.  Tinnitus affects approximately 15 to 20 percent of people in the United States, and a disproportionate number of veterans (see more below).  Most often, tinnitus is a symptom of an underlying condition, such as hearing loss, ear injury, or a circulatory system disorder.  Although it is very bothersome and can lead to significant impairment in everyday life, tinnitus is not typically life-threatening.  The most common tinnitus symptoms may include phantom noises in the ears such as:

Such phantom noise may vary in pitch from a low to high and can occur in one or both ears.  In some cases, the noise can be so loud that it interferes with individuals’ ability to concentrate or hear external sounds.  Furthermore, tinnitus may be present at all times, or it may come and go.  There are two main types of tinnitus, one of which is significantly more common than the other:

There are a number of health conditions that can cause or aggravate tinnitus, but an exact cause is not always established.  However, in many people, tinnitus is caused by one of the following:

Tinnitus can often be improved with the appropriate treatment and intervention.  For example, tinnitus may be treated with noise suppression, including:

Although medications cannot cure tinnitus, they may help reduce the severity of symptoms.  Examples of common medications for tinnitus include the following:

Finally, there are several lifestyle adjustments and home remedies that may be helpful for individuals with tinnitus:

Tinnitus is one of the most frequently claimed conditions for service connection.  While on active duty, service members are consistently exposed to loud noises, including gunfire, machinery, armored vehicles, aircraft, and other combat-related noises.  In addition, many veterans cope with TBIs stemming from traumatic injuries or exposure to improvised explosive devices (IEDs).  As a result, tinnitus and hearing loss are common conditions from which veterans suffer.  Symptoms of tinnitus can be more pronounced at night when one is lying down to sleep simply because it is quieter.  For service members on active duty, however, quiet may not be something that is experienced very often.  For this reason, a veteran may not even notice their tinnitus symptoms until long after they are discharged from service at which point they may decide to file a claim for VA disability benefits.

To establish service connection for tinnitus on a direct basis, veterans must prove that there is a connection between their diagnosis and their time in service.  Specifically, the following elements must be present: (1) a current diagnosis of tinnitus; (2) an in-service event, injury, or illness; and (3) a medical nexus linking the current diagnosis of tinnitus to the in-service event, injury, or illness.  The following types of evidence are often used to develop and strengthen claims for tinnitus:

Does Tinnitus Cause Other Conditions?

Tinnitus can cause significant impairments in a veteran’s everyday life and oftentimes results in a variety of other conditions as well.  The most common secondary conditions to tinnitus explained below. 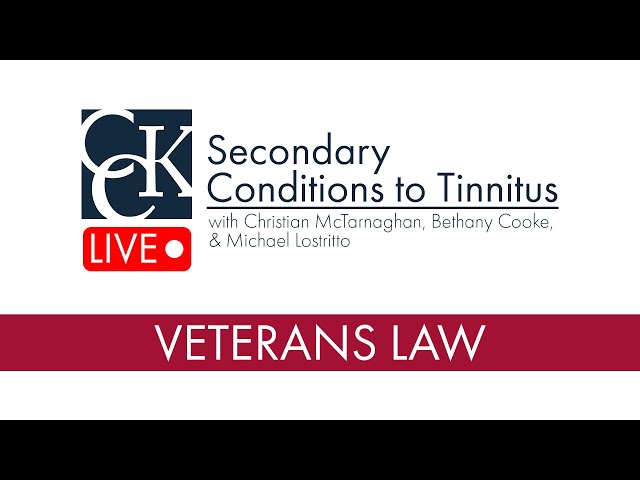 Migraine headaches are a type of headache characterized by intense pain that can be accompanied by nausea, vomiting, sensitivity to light and sounds, lightheadedness, and blurred vision.  Migraines can be debilitating and can last anywhere from hours to days depending on the person.  It is unclear what causes migraines, but triggers can include hormonal imbalance, alcohol, stress, and sensory stimulation (e.g., tinnitus).  According to the American Migraine Foundation, there is a strong relationship between tinnitus and migraine headaches.  Specifically, about 27 percent of individuals with tinnitus also suffer from migraines.  Some individuals also report a worsening in tinnitus symptoms during migraine attacks.  Recent studies suggest that tinnitus and migraines co-occur as a result of spontaneous abnormal neural activity; however, more research needs to be done in this area.

Depression is a serious mental health condition that affects the way a person thinks, feels, and acts.  Symptoms of depression tend to vary amongst individuals; however, common symptoms include:

Current research also points to a significant relationship between tinnitus and depression.  A 2015 study titled “The Correlation of the Tinnitus Handicap Inventory with Depression and Anxiety in Veterans with Tinnitus” looked at the percentage of veterans with tinnitus who also suffered from depression.  The results revealed that 58.2 percent of the sample (i.e., 91 veterans with a diagnosis of tinnitus) had depression.  Overall, tinnitus may cause complications with sleep thereby leading to stress, fatigue, and ultimately, depression.

Anxiety is defined as intense, excessive, and persistent worry and fear about everyday situations.  It is estimated that one-third of adults in the United States suffer from anxiety disorders.  The most common symptoms of anxiety disorders include the following:

Somatic symptom disorder is characterized by an extreme focus on physical symptoms, such as pain or fatigue, that causes major emotional distress and problems with social and occupational functioning.  Oftentimes, individuals with somatic symptom disorder have another diagnosed medical condition that is associated with these symptoms.  However, the individual’s reaction to the actual medical condition is excessive or disproportionate to the actual problem.  Veterans may become overly focused on their tinnitus symptoms and begin to worry about them excessively.

Sleep apnea is a potentially serious sleep disorder in which a person’s breathing is repeatedly interrupted during the course of the night.  There are three main types of sleep apnea, including the following: (1) obstructive sleep apnea; (2) central sleep apnea; and (3) complex (mixed) sleep apnea syndrome.  Generally speaking, the most common symptoms include: loud snoring, gasping for air during sleep, awakening with a dry mouth, morning headache, insomnia, hypersomnolence (i.e., excessive daytime sleepiness), and difficulty concentrating.  One previous study assessed the reported prevalence and severity of sleep disturbance in chronic tinnitus patients.  Of these patients, 80 were military personnel with a diagnosis of tinnitus associated with noise-induced permanent hearing loss.  Mini Sleep Questionnaire (MSQ) scores for sleep disturbance were found to be higher than those of normal controls in 77 percent of the patients.  The highest MSQ scores in tinnitus patients were for delayed sleep, morning awakenings, mid-sleep awakenings, morning fatigue, and chronic fatigue.