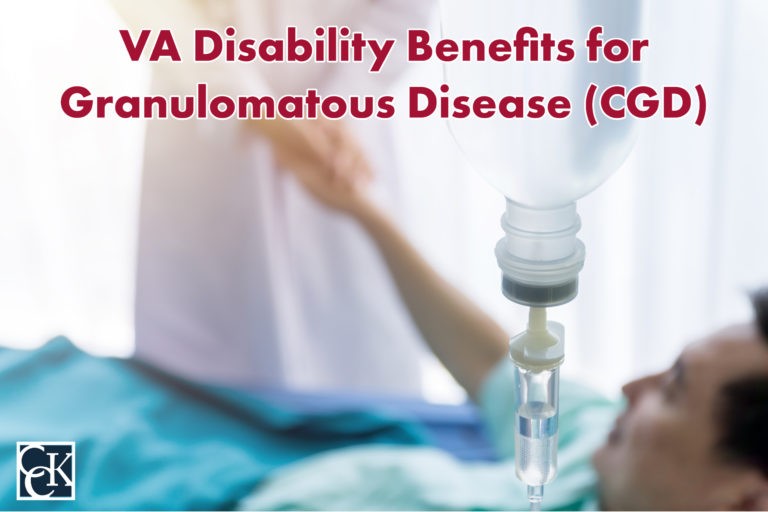 Chronic granulomatous disease, or CGD, is a disorder that can have serious adverse health effects.  Some veterans may have complications with CGD as the result of their military service.  If you are a veteran who developed chronic granulomatous disease as the result of your military service, you may be entitled to compensation through VA disability benefits.

What is Chronic Granulomatous Disease?

Chronic granulomatous disease is an inherited primary immunodeficiency disease, meaning that it is most often inherited and it increases the body’s susceptibility to infections that can be caused by bacteria and fungi.  A granuloma is a group of immune cells that form in response to an inflammatory stimulus, like bacteria and fungi.

To diagnose chronic granulomatous disease (CGD), a doctor may order certain tests such as neutrophil function tests, dihydrorhodamine 123 (DHR) tests, or genetic testing.  Doctors may also review a person’s family and medical history, since CGD is usually inherited.  Sometimes, a physical exam may also be performed to help diagnose CGD.

The goal of treatment for CGD is to manage symptoms and avoid infection.  Some forms of treatment may include:

Gene therapy is also currently being studied as a possible treatment for CGD.

Certain aspects of military service can worsen symptoms and cause infections for people who experience chronic granulomatous disease.  Certain exposures, like exposure to burn pits or Agent Orange, can also aggravate CGD.

In order to be awarded service connection for CGD, the veteran usually needs to provide three things:

In some instances, veterans may be eligible for presumptive service connection relating to their CGD.

Recently, the Honoring Our PACT Act created a presumption of service connection for granulomatous disease.  To be eligible, veterans need to be considered a “covered veteran.”  A covered veteran is one who served:

Granulomatous disease is one of the many conditions that have been linked to military burn pit exposure.  Many who were exposed to burn pits during their service have gone on to develop serious health conditions, often conditions affecting the respiratory system.

Burn pits are large pits that were used by the U.S. Military to dispose of waste in the post-9/11 era.  Waste such as plastics, rubber, petroleum, medical waste, human waste, and more were burned in these pits.

Burn pits were used commonly throughout places such as Iraq and Afghanistan in the post-9/11 era during Operations Iraqi and Enduring Freedom.

Although burn pits were effective in reducing waste, the practice created large plumes of toxic smoke which was problematic in places such as the Middle East, as the desert wind carried the smoke for miles.  Breathing in this smoke was dangerous and led to many respiratory ailments, such as chronic granulomatous disease. 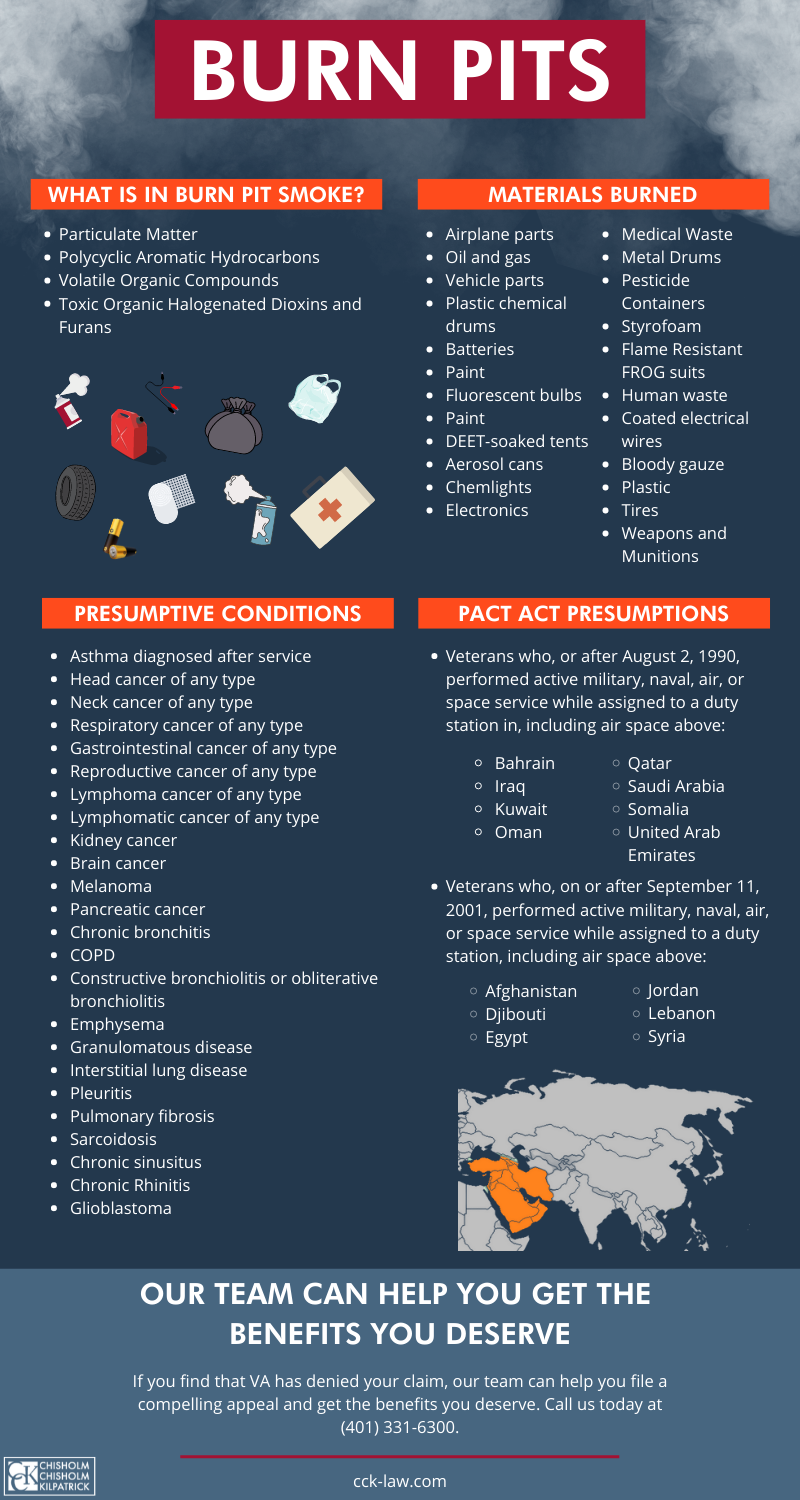 If a veteran files a claim for VA disability benefits for chronic granulomatous disease, then VA may request that the veteran attend a Compensation and Pension, or C&P, exam.  A C&P exam is an exam performed by a VA examiner, or VA-contracted examiner, with the purpose of gathering evidence about the veteran’s disability.  During the exam, the examiner will gather evidence to determine if service connection is warranted and to later establish a rating.

With exams for chronic granulomatous disease, the examiner may perform various respiratory tests to determine how well a veteran’s lungs are functioning.  These tests could include:

The results of these tests can be used later to assign a VA disability rating.

Chronic granulomatous disease can be rated under several different diagnostic codes in the VA schedule of ratings.  Below are some examples:

This code is used to rate rhinosinusitis, whether autoimmune, granulomatous, or caused by other circumstances. This rating is assigned using § 4.87 Schedule of Ratings for ear, nose, and throat.  The ratings are as follows:

This diagnostic code is for injuries to the pharynx specifically, which can occur if a person has chronic granulomatous disease.  The rating criteria instructs VA to assign a 50 percent rating for veterans who experience:

This diagnostic code is used to evaluate those who experience granulomatous rhinitis.  If a veteran experiences this, they may receive any of the following ratings:

This code is used for veterans who experience eosinophilic granuloma of the lung.  The code uses the same rating criteria as interstitial lung disease

Sometimes establishing service connection for chronic granulomatous disease can be challenging.  If you are a veteran experiencing these challenges, the experienced veterans’ advocates at Chisholm Chisholm & Kilpatrick may be able to help.  Our team can help build your appeal and guide you through every step of the process.  Call our office today for a free case consultation.