What is Service Connection with the Department of Veterans Affairs (VA)?

A current disability for VA purposes is an injury or illness that is the result of your military service.  It is worth noting that veterans do not actually need to have a diagnosis of a disability for service connection to be granted.  For example, when it comes to Gulf War illness, veterans can have an undiagnosed illness that may be related to exposure to environmental hazards during their service.  Additionally, in April 2018, the Court of Appeals for the Federal Circuit held in Saunders v. Wilkie that VA must award disability benefits for pain due to military service.  This means that if a veteran has pain related to their time in service, but does not have an underlying medical diagnosis, they can still receive VA disability benefits.

Nonetheless, having a confirmed diagnosis may still be the easiest way to establish the first element of service connection.  Therefore, if a VA healthcare provider or private physician can confirm a diagnosis, this may be helpful.

An in-service event, injury, or illness

The second element of direct service connection involves showing VA that something happened to you in service that caused a disability.  The most straightforward way that you can prove this second element is through your service records.  For example, if you received treatment for that disability during service and there are medical records to support that, VA should take that evidence into consideration.  Importantly, VA has a duty to assist veterans in substantiating their claims.  That is, if a veteran identifies to VA that there are some records missing from their claims file that may be able to help substantiate their claim, VA should make a reasonable effort in obtaining those records on the veteran’s behalf.  If such records are not available or VA is unable to obtain them, then VA should let the veteran know so that they can also make the necessary attempts to get them on their own.

A medical nexus linking the current disability to the in-service event, injury, or illness

A “medical nexus” is a link between a veteran’s current disability and an in-service event, injury, or illness.  Oftentimes VA will schedule a veteran for a Compensation & Pension (C&P) examination in order for a VA examiner to determine if that link exists.  Veterans can also ask their private physicians to provide a medical nexus for their claim to satisfy this requirement.  A positive medical nexus will indicate that it is “at least as likely as not” that the veteran’s condition was caused or aggravated by their time in service.

VA Presumptions – What They Are and Why They Were Established

Basically, a presumption is a legal concept where VA will assume that certain elements of service connection (outlined above) have been satisfied even if the veteran cannot otherwise establish that those elements have been met through the submission of evidence.  Instead, VA will presume that those elements are met and then grant the claim based on that alone.  The idea behind creating presumptions falls in line with VA’s overall directive to create a veteran-friendly system.  Overall, a number of presumptions have been established to assist veterans in making it easier to prove those particular types of claims.  Presumptions can satisfy different elements of service connection including the in-service occurrence or the medical nexus.

For example, veterans who served in the Republic of Vietnam during the Vietnam Era will be presumed exposed to herbicide agents such as Agent Orange.  As such, the in-service occurrence element of service connection is satisfied.  The veteran does not need to submit evidence demonstrating the exposure; VA will presume that the veteran was exposed to herbicides so long as they have qualifying service.

If a veteran can show that they were exposed to herbicide agents in service, or if they have qualifying service such that VA presumes exposure, there are certain conditions that VA will presume are linked to the in-service exposure.  In that scenario, veterans will not have to show through the submission of medical evidence, i.e. a medical nexus, that their condition is linked to their in-service occurrence.  VA’s presumption acts as the third requirement.

Another existing presumption involves Persian Gulf War veterans.  There is a presumption for these veterans who served in the Southwest Asia theater of war from August 2, 1990 through the present day.  They will be presumed to have been exposed to certain environmental toxins based on their service in those locations.  Again, those veterans who serve during this specific timeframe in those determined places will not have to prove that they were exposed to environmental toxins.  It will already be established under the presumption of exposure.

Presumption for Multiple Sclerosis and ALS

Importantly, if a veteran develops multiple sclerosis (MS) within seven years of discharge, VA will determine that it is presumptively related to service and there is no need to provide any additional nexus evidence.

For military veterans with amyotrophic lateral sclerosis (ALS), VA will grant presumptive service connection if the disease manifests at any time after discharge from military service.

Secondary VA Service Connection – What is it and How to Prove it?

A common example of secondary service connection involves VA determining a veteran’s peripheral neuropathy is secondary to their service-connected diabetes.  It is important to note that diabetes has a whole host of secondary conditions that tend to evolve or manifest as a result of the condition.  As such, veterans who are service-connected for diabetes should be mindful of the ways they might qualify for secondary service connection.

Another common example includes radiculopathies of the lower extremities as secondary to back conditions.  Importantly, veterans can receive secondary service connection for mental health conditions as well.  If a veteran’s service-connected back condition is so painful that it prevents the veteran from engaging in most activities, depression might develop as a result.  Here, the veteran could potentially argue that their depression was caused by their service-connected back condition.

How Are Secondary Conditions Rated?

The way VA rates a secondary condition depends on how it is related to the primary service-connected condition.  If it is direct and straightforward, meaning condition “A” caused condition “B,” then VA is going to rate condition “B” (i.e., the secondary condition) under the appropriate diagnostic code.  The rating percentage will then be factored into your combined disability rating accordingly.  However, if you are granted secondary service connection based on aggravation, it gets a little more complicated.  At that point, VA will try to establish what is called the baseline level of severity before the secondary condition was aggravated beyond its natural progression.  From there, VA will see how severe the secondary condition is now that it has been aggravated by the primary service-connected condition.  In the final step, VA will take the difference between those two ratings and assign a disability evaluation based on that.  Ultimately, the rating will sometimes be a little bit lower if it is based on aggravation versus the more direct route described above.

What is VA Service Connection Based on Aggravation?

It is important to note that “clear and unmistakable” is a very high evidentiary standard for VA to meet.

Again, VA will try to determine what the rating would have been prior to any aggravation due to a service-connected condition or due to service.  After the condition has been service connected, VA will assign a rating based on what the current severity is.  From there, VA will take the difference between those two and determine the severity that is due either to another service-connected condition, or due to service.

Importantly, veterans should try to provide medical evidence or an expert opinion to establish both the baseline level and current level of severity of their condition. 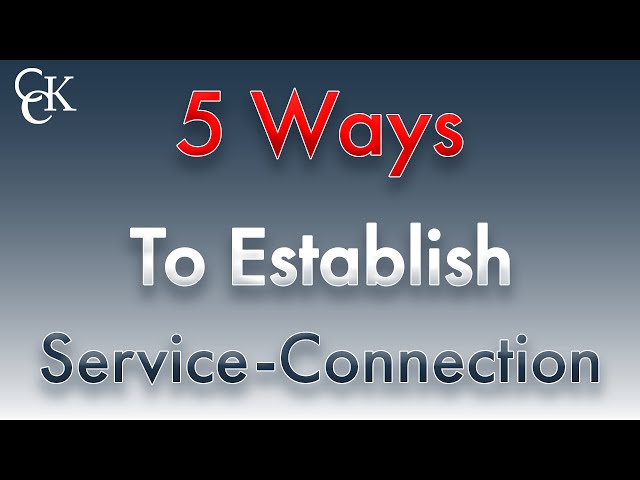 Service connection based on 1151 VA claims refers to the statute 38 CFR § 1151.  Unlike the other forms of service connection, this type does not involve service connection for a condition that arose due to service.  Instead, it is service connection for a condition that arose due to the circumstances of VA care.  Specifically, it applies to disabilities or death that result from “hospital care, medical or surgical treatment, or examination” by a VA medical professional or facility, or due to participation in a program of vocational rehabilitation.  For 1151 claims, veterans must show that the treatment or the care that they received at a VA facility was negligent or lacking in proper skill in some way that caused their current disabilities.  Furthermore, it must be a disability that is not reasonably foreseen based on the type of care being received.  If you enter into a surgery with many known associated risks and something arises from that surgery that is fairly common, it is not likely that an 1151 claim will been granted.

Veterans can also file 1151 claims if they were injured while participating in a vocational rehabilitation program or a compensated work therapy program.  In this case, veterans do not actually have to show that there was any negligence at the fault of VA.  Instead, it is just something that happened while participating in one of these programs.  Nonetheless, medical evidence is extremely important in these claims, particularly because they are very hard to prove.  As such, veterans should try to submit evidence from the time of their treatment as well as a nexus opinion showing that their disability is linked to the in-treatment injury or accident.

Importantly, a veteran’s surviving spouse or dependent can file an 1151 claim.  They would have to show that the veteran’s death was due to that negligent care on VA’s behalf.  Again, they are going to need strong medical evidence to show that there was some sort of negligence or deviation from the standard of care that they would normally be receiving that then resulted in their death.