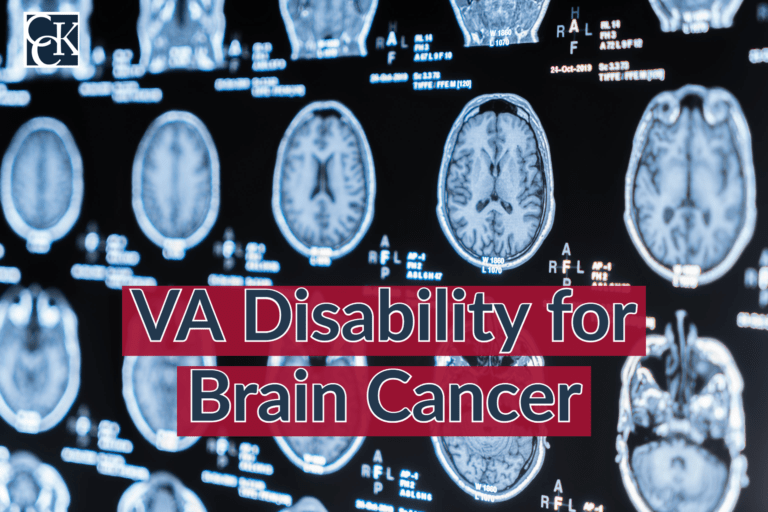 Sometimes tumors can form on the brain or spinal cord, or the central nervous system.  These tumors can be benign or malignant.

If a tumor is benign, it can grow and press on areas of the brain, but benign tumors rarely spread into other tissues.  Benign tumors may be recurring.

There are other forms of brain tumors which fall into other categories, so the above list is not exhaustive.

Diagnosing and Treating for Brain Cancer

Oftentimes, certain tests must be done to definitively confirm a diagnosis of brain cancer.  Some tests which may be performed to diagnose brain cancer include:

To treat brain cancer, any combination of surgery, radiation, or chemotherapy may be used.  Decisions about which treatment are to be used are usually made on a case-by-case basis.

To submit a claim for service connection, veterans can fill out and submit a claim via VA Form 21-526EZ.  This form can be submitted online or directly to VA in person.

As mentioned above, exposure to certain toxins is one of the most common causes of brain cancer related to military services.  Specifically, exposure to Agent Orange, military burn pits, and ionizing radiation have been linked to brain tumors.

Agent Orange is an herbicide that was used extensively throughout the Vietnam War Era and later was found to cause many adverse health effects to those who were exposed.  This is because Agent Orange creates a highly toxic contaminant known as 2, 3, 7, 8-Tetrachlorodibenzo-p-dioxin (TCDD) as a byproduct.

One of the conditions that has been linked to Agent Orange is glioblastoma.  Glioblastoma is an aggressive form of brain cancer, and the most common type of malignant brain tumor among adults.

In 2017, VA data indicated that more than 500 Vietnam War Era veterans had been diagnosed with glioblastoma at VA health care facilities since 2000.  United States Senator and Vietnam veteran John McCain passed away from glioblastoma in 2018, less than a year after being diagnosed.

VA has had a complicated history with granting benefits for glioblastoma related to Agent Orange exposure.  Between 2009 and 2017, the Board of Veterans’ Appeals issued more than 100 decisions in cases in which widows have appealed benefit denials related to their husbands’ brain cancer.  Of those decisions, only about two dozen issued a grant of benefits.

Recently, the Honoring Our PACT Act extended the presumption of herbicide exposure to service members with active military naval, air, or space service who served in:

While the PACT Act did expand the above-mentioned service requirements, glioblastoma was not added to the list of conditions eligible for presumptive service connection.  This means that veterans need to provide evidence to prove that their Agent Orange exposure caused or contributed to their glioblastoma.

Burn pits are large pits that were used by the U.S. Military to dispose of waste in the post-9/11 era.  These pits were used largely throughout Iraq and Afghanistan.  Human waste, medical waste, metals, plastics, ammunition, petroleum, and other materials were burned in burn pits.  As the materials burned, toxins were released into the atmosphere.  These toxins were carried by the desert wind and, as a result, were breathed in by the many servicemembers living and working in the area surrounding the pits.

Veterans who develop brain cancer after being exposed to burn pits may be eligible for presumptive service connection if their service meets the criteria for “covered veterans.”  A covered veteran is one who served:

There are several forms of ionizing radiation including gamma rays, x-rays, and higher ultraviolet parts of the electromagnetic spectrum.  Ionizing radiation is extremely harmful to humans.  This form of radiation can damage DNA cells because it has enough energy to remove electrons from atoms or molecules.  Humans may be exposed to ionizing radiation as it passes through the skin, or it can be inhaled or swallowed.

VA does recognize brain cancer, as well as several other conditions, as linked to exposure to ionizing radiation under  38 C.F.R. 3.311.  This essentially means that veterans who served in one of the above locations and are diagnosed with brain cancer should be eligible for presumptive service connection.

If a veteran is service connected for an active cancer, such as brain cancer, VA should automatically assign a 100 percent disability rating.  This rating continues for as long as the cancer is active, and then for another six months following the successful completion of a treatment program, such as chemotherapy, radiation, or surgery.

For example, migraines are a common residual symptom of brain cancer.  If the brain cancer is no longer active, VA will likely reduce the disability rating for that condition and assign a new rating based on the severity of the veteran’s migraines.

Accredited representatives can help veterans navigate the VA claims and appeals process, as well as collect evidence, craft appeals, and submit documentation on behalf of the veteran.

If you need the assistance of an accredited representative on claim for VA disability benefits for brain cancer, contact the CCK team today for a free case review.