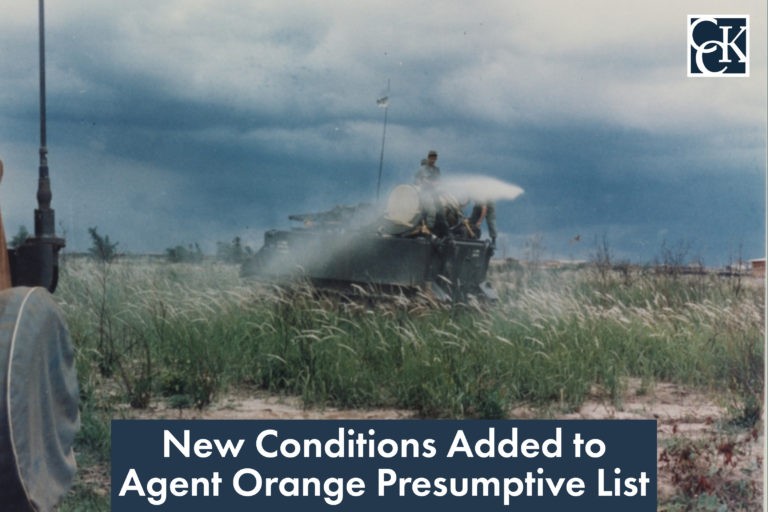 Three new conditions were recently added to the list of presumptive conditions for which the Department of Veterans Affairs grants service connection to Vietnam War veterans affected by exposure to the chemical herbicide Agent Orange.  This means that tens of thousands of veterans will now be eligible for VA disability benefits if their Agent Orange exposure resulted in bladder cancer, hypothyroidism, or Parkinson’s Disease-like symptoms.

The addition of these conditions is unusual in that it came from Congress, not VA.  Typically, presumptive conditions are determined by VA, based on significant supporting evidence from scientific studies.  However, in this case, the conditions are being added as part of a measure included in the National Defense Authorization Act, or NDAA.  The National Defense Authorization Act is a policy and spending bill for the Defense Department that passes through Congress every year.

Understanding the Connection Between Agent Orange and Vietnam War Veterans

To fully grasp the significance of the changes made by the 2021 NDAA, it is helpful to first understand the decades-long impact of Agent Orange on Vietnam-era veterans.  During the Vietnam War, the United States used several herbicides to destroy its enemy’s crops. The goal was to interrupt their food supply, and to destroy foliage in the jungle to increase visibility to prevent ambush attacks.

Among these chemical agents, and perhaps the most well-known of the “rainbow herbicides” used during the Vietnam War, was an herbicide called Agent Orange.  Agent Orange contained a mixture of two kinds of herbicide agents (i.e., 2,4-D and 2,4,5-T).  However, as a byproduct of its production, it also contained the highly toxic dioxin contaminant 2,3,7,8-TCDD.

As a result of this dioxin contaminant, many veterans who were exposed to Agent Orange have developed serious health conditions.  These conditions include everything from respiratory cancer to Diabetes Mellitus Type 2, and often symptoms do not appear for years after exposure.

In response to the many Vietnam-era veterans experiencing health-related concerns due to herbicide exposure, the Agent Orange Act of 1991 was passed.  The Act established a presumption of service connection, meaning that VA must assume that veterans who served during certain time periods in predetermined locations were exposed to Agent Orange.

A presumption of exposure replaces the element of service connection that requires veterans to provide proof of an in-service event, injury, or illness that led to their current disability.  Instead, VA considers herbicide exposure (i.e., Agent Orange) to be the in-service event for any veteran with active military, naval, air, or space service in the following locations during the specified timeframes:

If you are a veteran who served in Vietnam between January 9, 1962 and May 7, 1975 then you are presumed exposed to herbicide agents.  If you have a diagnosed condition from the list on this page, then service connection should be granted on a presumptive basis.

After that decision came out, Congress enacted Blue Water legislation that gives veterans precise coordinates where Blue Water Navy veterans were located, generally fitting within the 12 nautical miles seaward of the demarcation line.  Therefore, any veteran who served within 12 nautical miles of Vietnam or within those coordinates can now be presumptively exposed to herbicides.  This opens up the presumptive benefits to a great number of these Navy veterans.

However, VA Secretary Wilkie has issued a stay on all of these claims until January 2020.  Veterans can still file for service connection if they are Blue Water Navy veterans, and their claims will enter the pending inventory, but VA will not make a decision until it decides how to determine which Navy ships were located where.  Overall, it is still important to file for service connection as soon as possible in order to receive the earliest possible effective date and thereby the earliest start date of retroactive benefits to which you may be entitled.

If you served on or near the Korean DMZ between September 1, 1967 and August 31, 1971, you should be presumed exposed to herbicide agents.  VA and the Department of Defense (DoD) have established a long list of units that are presumed exposed; however, if you were not in one of the units listed, VA might give some push back.  Nonetheless, it is still possible to get service connection due to Agent Orange exposure.  The Korean DMZ exposure presumptive can be tricky because instead of the standard used for Vietnam, VA uses the language “on or near the DMZ,” and so the question becomes what is considered “near the DMZ?”.  VA has yet to answer this question.

In the past, while VA recognized that herbicide agents were used in Thailand, it was incredibly difficult for veterans to prove Agent Orange exposure unless they were stationed on certain Royal Thai Air Force bases (e.g. U-Tapao, Ubon, Udorn, Takhli) during the same time period as Vietnam veterans (January 1962 to May 1975).  Specifically, if a veteran’s military occupational specialty (MOS) or job duties put them on or near the perimeter of the base, VA should have conceded exposure.  In addition, there were certain military occupational specialties that VA agreed had perimeter involvement.

As of 2022, VA now concedes that veterans who served at any U.S. or Thai base from January 9, 1962 to June 30, 1976 were exposed to Agent Orange, without regard to their MOS or where on the base they were located.  With this new presumptive framework, it should be easier for Thailand veterans to prove herbicide exposure in Thailand.

To prove you served on a military base in Thailand, you can offer evidence beyond just service records.  You can provide lay statements detailing your time on the base and anything relevant to exposure.

The C-123 aircraft were used to spray Agent Orange in Vietnam and were then sent back to the United States and used by the Air Force and Air Force reserves.  As a result, veterans might be exposed to herbicides even if they never set foot in any of the above-mentioned locations.  If you were a member of a certain Air Fore unit where contaminated C-123’s were assigned and had regular contact with the aircraft between 1969 and 1986, then the Vietnam “boots on the ground” presumptive of exposure applies.

If you then develop any condition associated with Agent Orange exposure, the presumption of service connection should apply as well.  Reservists at certain bases within the same time period can also get the presumptive.  38 CFR § 3.307a lists the precise units and information about who qualifies.

Other Locations Where Agent Orange was Used

In addition, VA maintains a list both within the U.S. and outside of the U.S. where herbicides were either tested, stored, or used.  Some veterans were involved in testing Agent Orange before it went into use and others were later involved in the disposal of any left over product after the conflicts were over.  Therefore, the number of veterans affected is wide ranging and spans across many years and locations.

In addition, the Agent Orange Act created a presumption of service connection.  Presumptive service connection means that veterans do not have to prove a medical nexus between their condition and their military service.

If their service meets one of the above criteria and their condition is included in VA’s list of presumptive conditions, VA will grant service connection.  The Act also gave the Secretary of the Department of Veterans Affairs the power to add conditions to this list over time through the creation of new regulations.

As mentioned above, the passing of the 2021 NDAA means that Congress has bypassed VA and determined, by statute, the link between three new medical conditions and Agent Orange exposure.  These conditions, which are now part of the list of presumptive conditions, include:

The addition of these three conditions to VA’s presumptive list will make it easier for veterans suffering from bladder cancer, hypothyroidism, or Parkinson’s-like symptoms due to Agent Orange exposure to secure disability benefits from VA.

Why Did Congress Expand the Presumptive List, Not VA?

The addition of bladder cancer, hypothyroidism, and Parkinson’s-like symptoms to the list of presumptive conditions has been long and complicated process.  Typically, the Secretary of VA proposes a new regulation to add a condition (or conditions) to the list when sufficient evidence linking the condition to Agent Orange has been collected.

In this case, however, Secretary Wilkie refused to propose a regulation to add the three conditions, despite evidence from studies dating back to 2016.  These studies (e.g., Vietnam Era Health Retrospective Observational Study) concluded that there was “suggestive” evidence linking Agent Orange exposure to each of the above-mentioned conditions.  Further, similar studies that met the same threshold of “suggestive” evidence have been used to add presumptive conditions in the past.

As a result, a Congressional statue was needed to add bladder cancer, hypothyroidism, and Parkinson’s-like symptoms to VA’s list of presumptive conditions.  Congress achieved this by including a measure in the 2021 NDAA that would approve benefits for veterans suffering from three more conditions thought to be caused by exposure to the chemical herbicide Agent Orange.

Does This Change Impact Nehmer Class Members and Other Vietnam-Era Veterans?

Nehmer v. U.S. Department of Veterans Affairs was a class action lawsuit brought against VA by the National Veterans Legal Services Program in 1986.  As a result of the case, VA must take certain actions when it recognizes a new condition as scientifically linked to Agent Orange exposure.  Specifically, VA must: (1) identify all claims for the recognized condition that were previously filed and/or denied; and (2) pay retroactive disability and death benefits to the veterans or their survivors back to the date of the veteran’s initial claim

The Nehmer class consists mainly of veterans who served in Vietnam and suffer from conditions VA has deemed presumptive.  It is important to note that since three new conditions have been added to the list, veterans who suffer from one of the three may now be considered part of the Nehmer class.  This is particularly relevant to veterans who previously filed a claim for one of the three conditions but were denied.  These veterans may now be able to secure benefits with an effective date back to the date of the original claim.

Veterans who served in Thailand, Korea, and other areas may have also exposed to and affected by Agent Orange.  In this instance, a veteran suffering from one of the established presumptive conditions would still have to prove the first two elements of service connection (i.e., a current diagnosis and an in-service event), but they would not have to prove the medical nexus, or link, between their diagnosis and the in-service event.

In addition to the 2021 NDAA, the Honoring Our Promise to Address Comprehensive Toxics Act (PACT Act) of 2021 was officially enacted in July 2022.  Alongside other legislation regarding burn pits and VA health care, this bill expanded Agent Orange presumptions to include additional locations and time periods.

As mentioned above, the PACT Act also expanded presumptions of exposure related to Agent Orange to include Thailand, Cambodia, Laos, Guam, American Samoa, and Johnston Atoll.  Now, any veteran with active military, naval, air, or space service in one of these locations – in addition to service in Vietnam, on or near the Korean DMZ, and on or near C-123 aircraft – can qualify for presumption of exposure to Agent Orange.

According to the PACT Act, if the claim is for Dependency and Indemnity Compensation (DIC), or the veteran is terminally ill; homeless; under extreme financial hardship; 85 years old or older; or can show other sufficient cause, then this presumption is effective immediately.  Otherwise, the PACT Act Agent Orange presumptions will become effective on October 1, 2022.

If you are a Vietnam-era veteran suffering from one of the newly determined presumptive conditions, the veteran’s disability team at Chisholm Chisholm & Kilpatrick LTD may be able to assist you.  Whether you are filing an initial claim, appealing a denial of benefits, or seeking an earlier effective date, an accredited attorney from CCK may be able to guide you through the process.  For more information, as well as a complimentary case review, contact us online or at 800-544-9144. 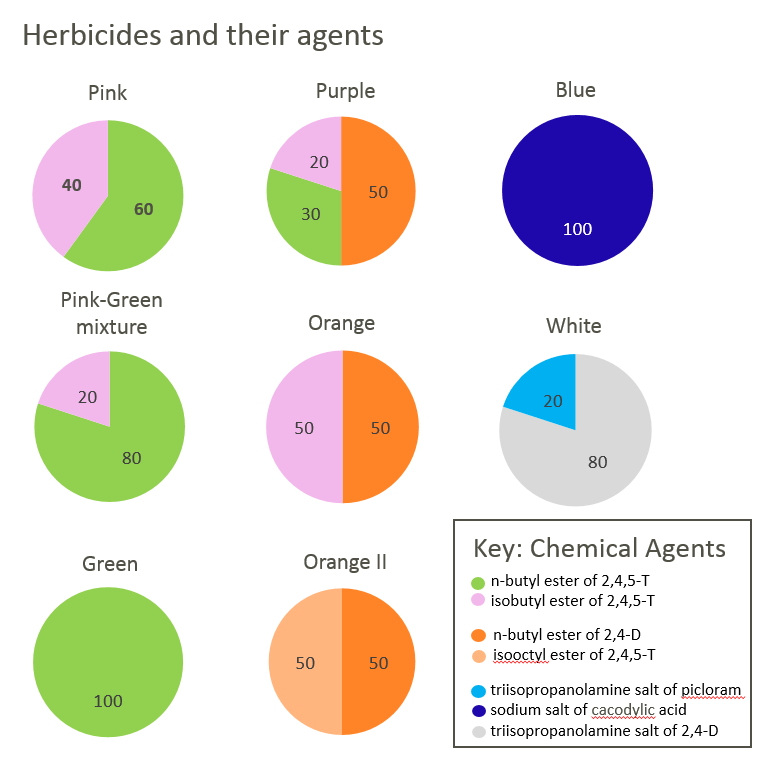