Post-traumatic stress disorder (PTSD) is a mental health condition that occurs as a result of experiencing a distressing, shocking, or otherwise traumatic event.  Many veterans develop PTSD from events they witnessed or experienced during their military service.  PTSD can be diagnosed by a medical professional, whether it be a therapist, psychiatrist, or general practitioner.  It is important to note that the symptoms and severity of PTSD can vary from person to person.  However, the most common symptoms include:

Veterans may be eligible to receive VA disability benefits for PTSD if they experienced a traumatic event during service and now have the above-mentioned symptoms as a result.  This traumatic event or incident that caused the veteran’s PTSD is known to VA as a “stressor.”  Veterans can have multiple stressors, which can come in various forms.

To obtain direct service connection for PTSD, veterans must demonstrate the following to VA:

How VA Rates PTSD and Other Mental Health Conditions

Aside from eating disorders, VA rates all mental health conditions using the same diagnostic criteria.  Mental health conditions are rated at 0, 10, 30, 50, 70, or 100 percent using VA’s General Rating Formula for Mental Disorders.  These ratings are based on the level of social and occupational impairment a condition presents.  However, each disability rating presents its own diagnostic criteria and requirements.

In this case, a veteran may experience certain PTSD symptoms that are exacerbated during periods of stress, but ultimately do not impair their ability to work in most occupations. Furthermore, the increase in severity of PTSD symptoms during periods of stress implies that the symptoms tend to be episodic otherwise. This means that they are not always present and therefore do not significantly interfere with occupational and social functioning. Moreover, when symptoms are present, it is likely that they can be managed with treatment or medication. Overall, a 10 percent rating on the PTSD rating scale reflects a low level of disability.

Again, each rating under the General Rating Formula for Mental Disorders has specific criteria that a veteran must meet in order to receive that evaluation.  The criteria for a 30 percent rating on the PTSD rating scale are as follows:

The criteria for a 30 percent PTSD rating outlined above are meant to represent mild PTSD symptomatology.  In this case, “occasional decrease in work efficiency and intermittent periods of inability to perform occupational tasks” might mean that you are starting to periodically miss work due to your lack of motivation associated with PTSD.  However, your PTSD does not fully prevent you from performing and succeeding in a work environment.

Furthermore, you may experience symptoms such as depressed mood, anxiety, and panic attacks.  This may cause you to occasionally isolate yourself but does not completely prohibit you from maintaining your relationships with others.  Overall, a 30 percent PTSD rating is assigned when a veteran demonstrates these symptoms in a mild manner, intermittently over time.

The 50 percent PTSD rating criteria involve an escalation in the frequency, duration, and severity of PTSD symptoms from lower ratings, and also includes several additional symptoms  If you receive a 50 percent PTSD rating, it is likely that you are beginning to display more noticeable cognitive deficits such as difficulty following instructions or making decisions that depart from past behavior.

Additionally, some of the mood-associated symptomology including depression and anxiety may begin to manifest in physiological ways, such as a flattened affect.  In other words, due to feelings of depression, you might speak in a monotonous tone and lack facial expressions. The overall level of occupational and social impairment also increases as part of the 50 percent PTSD rating.  Here, the symptoms mentioned above cause a decrease in your ability to efficiently complete work-related tasks.

A 70 percent PTSD disability rating is one step below the highest schedular rating for the condition.  Many veterans receive a 70 percent PTSD rating because their symptoms cause significant levels of impairment, both occupationally and socially.  This rating is typically assigned to veterans with PTSD symptoms that are one step below totally disabling.  The criteria for a 70 percent on the PTSD rating scale are as follows:

The 70 percent disability rating criteria for PTSD are the most inclusive insofar as they represent a wide array of symptoms. Furthermore, they also reflect a progression of the symptoms included in the lower disability ratings. Namely, a veteran who receives a 70 percent PTSD rating suffers from all the symptoms included in the 50 percent rating, but at a higher frequency, severity, and duration. Here, the veteran is almost always in a state of panic or depression that affects their ability to interact with others.

The veteran may also have trouble controlling their emotions in a way that leads to violent outbursts or conflict with others. The level of occupational and social impairment may be evidenced by the veteran’s inability to hold down a job or complete classes for school. Additionally, a veteran may engage in obsessional rituals such as checking the locks on their doors multiple times throughout the course of a day as a result of being hypervigilant.

The above-mentioned symptoms represent a substantial decline in cognitive and emotional functioning as compared to the rating criteria for lower percentages.  Importantly, this decline results in a total impairment when it comes to a veteran’s work life and personal life. Specifically, a veteran may experience hearing voices or perceiving things that are not actually present.  Self-injurious behaviors and suicide attempts are also consistent with a 100 percent rating.

In addition to this suicidality, a 100 percent on the PTSD rating scale also includes homicidal ideation in which a veteran might have thoughts of harming others.  An intermittent inability to perform activities of daily living can involve a veteran feeling too depressed to get out of bed, take a shower, or change clothes.  All of these symptoms and behaviors are consistent with the highest level of impairment reflected by the rating criterion.

Do Veterans Need to Have All of the Symptoms Listed to Receive a PTSD Rating?

As mentioned above, the General Rating Formula for Mental Disorders includes a large number of symptoms for each disability rating.  Importantly, a veteran does not need to exhibit all of these symptoms in order to qualify for a specific rating.  For example, a veteran who only experiences suicidal ideation and near-continuous panic or depression still falls under the 70 percent PTSD disability rating according to VA law.  Specifically, the Court of Appeals for Veterans Claims case, Mauerhan v. Principi, established that the symptoms listed in Diagnostic Code 9411 (PTSD) are not intended to constitute an exhaustive list, but rather serve as examples of the type and degree of symptoms, or their effects, that would justify a particular rating.  Therefore, a veteran can have any number of the symptoms listed in the rating criteria and still meet that level of evaluation.

What if Your Symptoms Are Consistent with More Than One PTSD Rating?

Since PTSD is a complex condition and many of the symptoms within the rating criteria overlap, you may not fall completely into one percentage category.  For example, you may experience mild memory loss in addition to impaired judgment and flattened affect, meaning your symptoms are consistent with both a 30 percent and a 50 percent rating on the PTSD rating scale.   Since it is not possible to split the difference between the two ratings, VA must choose one to award.  In these cases, VA should award the higher rating based on 38 CFR § 4.7.  Specifically, when there is a question as to which of two evaluations should be applied, the higher evaluation will be assigned if the disability more clearly meets the criteria required for that rating.

Total Disability Based on Individual Unemployability (TDIU) Based on PTSD

Importantly, if your PTSD significantly impairs your ability to work, you may be eligible for a total disability rating based on individual unemployability (TDIU) – a VA benefit that allows veterans to receive compensation at the 100 percent rate if their service-connected condition(s) prevent them from securing and maintaining substantially gainful employment.

There are two ways veterans can qualify for TDIU based on their PTSD under VA’s regulation 38 CFR § 4.16: schedular and extraschedular.  In order to be eligible for schedular TDIU:

If you do not meet the eligibility requirements listed above, but you are unemployable due to your PTSD, you may qualify for TDIU on an extraschedular basis.  In both cases, you must show that your PTSD (along with your other service-connected conditions, if applicable) contribute to your inability to work. 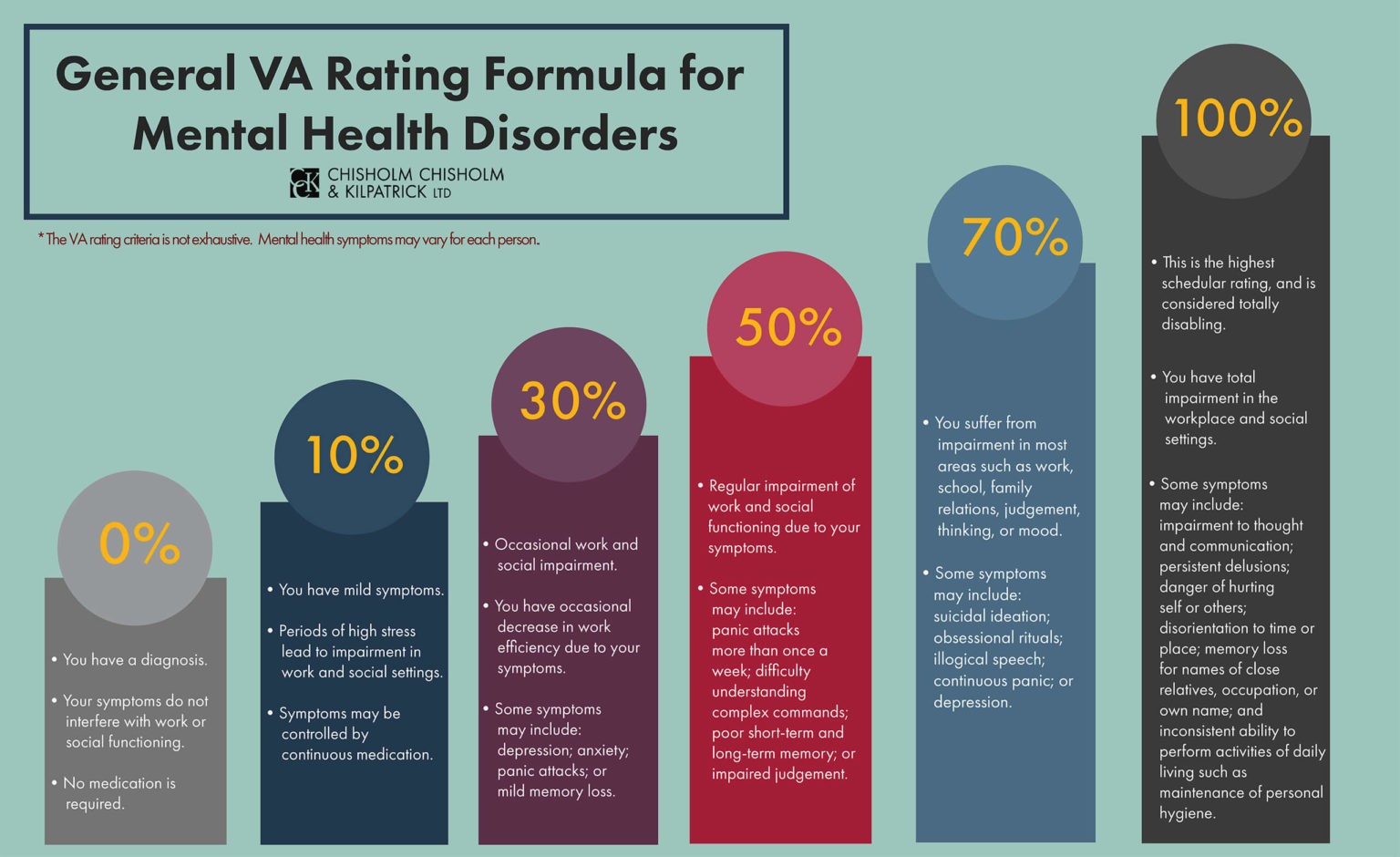