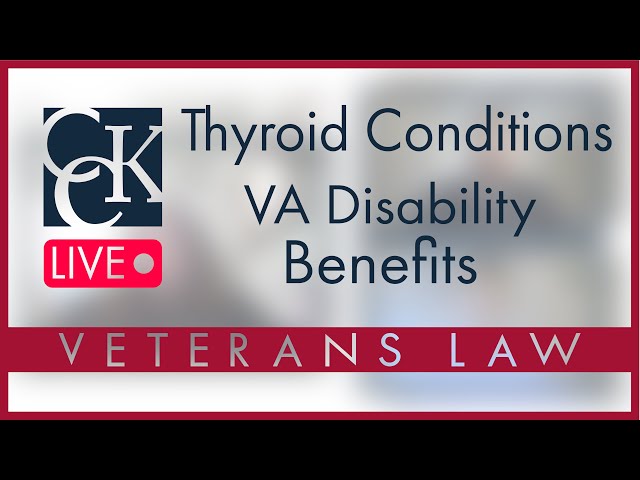 Jenna Zellmer: Good afternoon and welcome to CCK Live. My name is Jenna Zellmer and joining me today are Alex Saxe and Brandon Paiva. Three of us represent veterans before the VA and before the Court of Appeals for Veterans Claims.

Today, we are going to be discussing VA Disability Benefits for Thyroid Conditions. And so, before we get into the specifics of how VA rates them and all the different kinds, Brandon, why don’t you tell us a little bit about how the thyroid works?

Brandon Paiva: Sure thing. Thanks, Jenna. Yes, we’ll start by just sort of developing a basic understanding of what the thyroid is. So, essentially, the thyroid is a small butterfly-shaped gland in the front of the neck, located just in turn at Adam’s apple and it’s classified as being part of the endocrine system.

Now, the thyroid is primarily responsible for releasing hormones that control metabolism and affects the way that the body uses energy. So, thyroid hormones regulate many other vital bodily functions as well, including breathing, heart rate, body weight, body temperature, muscles strength, menstrual cycles in females, and even more.

Thyroid conditions are really common among veterans, especially in those who are exposed to toxic substances, like Agent Orange, during service.

Jenna: Yeah and there are a lot of different thyroid issues that a veteran can suffer from, kind of as you just mentioned of the different bodily functions of the thyroid regulates that you would understand that would affect a lot of different types of issues. So, thyroid conditions, in general, are rated under 38 CFR § 4.119, and we’re going to be talking about some of the most common thyroid issues that a veteran can face today.

So, Alex, why don’t we start with diagnostic code 7900, which is hyperthyroidism.

Alex Saxe: Yeah. Thanks, Jenna. So, again, looking at the DC 7900, which is hyperthyroidism, including Graves’ disease. Hyperthyroidism is also called overactive thyroid. It’s a common condition in which the thyroid gland produces excess thyroid hormones. So, some common symptoms we see from hyperthyroidism can include fatigue, muscle weakness, heat intolerance, trouble sleeping, irregular heartbeat, weight loss, and eye swelling.

And VA will assign a 30% rating for six months upon there being an initial diagnosis. After six months, veterans are reevaluated, and then rated based on either residual symptoms of the disease or the complications of the medical treatment. And VA uses different diagnostic codes, corresponding to the affected body system, to rate those residuals or complications.

Jenna: Yeah, and that’s unusual. Not all disabilities get an automatic rating of 30 or anything like that. So, that’s nice that eventually, you have to demonstrate what else you suffer from, but in the beginning, you get an automatic 30 and you can kind of deal with the things that you are suffering from and then think about the rating later. I think that’s definitely one of the most common ones that we see, hyperthyroidism.

Brandon, what about toxic thyroid enlargement?

First, we’ll unpack what diagnostic code 7901 is and how VA sort of rates that. So, diagnostic code 7901 is for toxic thyroid enlargement. Now, toxic thyroid enlargement is also known as a goiter. This is a condition where the thyroid gland becomes enlarged and produces too many hormones. This condition is also rated as hyperthyroidism. So, hyper means it’s producing too many. If the enlarged gland causes disfigurement of the neck, it’s also rated under another diagnostic code, 7800. I think I might say that again because I think I just heard my message come through. So, an enlarged gland causes disfigurement of the neck, it’s rated under diagnostic code 7800.

Jenna: Great. Yeah. You can already see there are so many different kinds of complications that can arise from the thyroid. We talked about hyperthyroidism, which is when the thyroid gland produces too many hormones. The opposite of that is hypothyroidism. You have to really listen carefully because there’s “hypo” and there’s “hyper”. And so, hypothyroidism is an underactive thyroid, it’s the opposite of hyper. But hypothyroidism is when the thyroid gland doesn’t produce enough thyroid hormones. And some of the symptoms overlap, which makes it kind of difficult, but some of them are kind of the reverse.

So, symptoms of hypothyroidism include fatigue, which you also see in hyper, and then weight gain which is the opposite of the weight loss in hyper. Cold intolerance, puffy face, constipation, dry skin, hair loss, heavy or irregular menstrual cycles, depression, and a slowed heart rate. There are a lot of different issues that can arise from hypothyroidism.

Some veterans even developed myxedema, not sure if I’m saying that right. But it’s a severely advanced form of hypothyroidism that can be life-threatening. It’s not just superficial issues like a puffy face or weight gain. These are serious conditions that can arise from an underactive thyroid gland.

And veterans with this very severe form are assigned a 100% rating while the disease is active. And again, for those first six months. And then after the stabilization, they’re assigned a 30% rating.  And then similar to hyperthyroidism, after that six-month period, they’re also rated based on the residual symptoms or complications of their treatment. So, that’s another one. Alex, let’s move on to thyroiditis.

Alex: Great. Yeah. Thyroiditis is going to be found on your diagnostic code 7906. It is the inflammation of the thyroid gland. So, this condition may produce any symptoms or may not produce any symptoms but it can lead to the development of either hyper or hypothyroidism. So, according to VA’s rating schedule, if a condition presents no symptoms, obviously veterans are assigned a 0% rating.  But if it results in hypothyroidism or hyperthyroidism, VA will evaluate the condition as such.

Jenna: It’s kind of like an indirect route of getting the other two,  And Brandon, last but not least, how about DC 7914?

Brandon: Yes. So, diagnostic code 7914, now excuse me if I’m pronouncing this incorrectly, we’re not medical professionals, which is why we’re in the field of law, but now we’re going to go over malignant neoplasm of the endocrine system.

Veterans with thyroid cancer are automatically rated at 100% while their cancer is active. Much like conditions that are rated by VA when they have active cancers. Now, following successful treatment, this 100 percent rating will remain in effect for a total of six months. After that six-month period, following treatment, and following that 100 percent rating, once that has passed, veterans will then be rated on any and all residual symptoms that they suffer after treatment.

Jenna: Great. So, as you can see, there are a lot of different issues that can arise with thyroid conditions. And so, it’s really important just to be honest with your doctor, go to your doctor appointments regularly, go to your VA examinations, and make sure that whatever issues that you’re experiencing are being properly diagnosed because you can see there’s a lot of opportunities here to get compensation for the disability from which you suffered due to service.

And so that kind of leads me to my next point, which is why are so many veterans developing thyroid conditions? I mean it has to do with their exposure to hazardous chemicals such as Agent Orange. So, there’s a really high prevalence of Agent Orange exposure among thyroid cancer patients in the national VA health system. And veterans with thyroid cancer who served in certain areas and during certain time periods may actually qualify for presumptive service connection.

And so, just recently in 2021, the National Defense Authorization Act added hypothyroidism to the list of presumption of conditions caused by Agent Orange. So, that means that veterans do not have to prove that their hypothyroidism was related to service, they just have to show that they were exposed to Agent Orange or served in a presumptive location during this presumptive time period and they should be granted service connection for hypothyroidism.

I think we have a lot of information on presumptive conditions in general, and Agent Orange conditions specifically, and so I would definitely encourage you to check out our other videos and our other blog posts. But that’s something that’s a fairly new development is that if you have hypothyroidism, you can get a presumptive service connection if you need the other elements of the presumption.

That’s not to say that your other conditions, like I said hyperthyroidism is different than hypo, or any of those other thyroid conditions that we just talked about, can’t be service connected, but you do have to go through the normal processes of showing the elements of service connection. So, it’s just a little bit more work. And so, I would really encourage you to talk to your veteran service representative or your attorney, whoever is helping you kind of navigate that system.

So, that’s Agent Orange. But there are lots of other exposures that veterans can have due to service. So Alec, why don’t you talk about some of those?

Alec: Yeah. One of the other chemicals that we see a fair amount, maybe a little less than the Agent Orange exposure, chemicals such as PBDs, and that stands for, this is a mouthful, polybrominated diphenyl ethers. So, the PBDs can lead to hyperthyroidism. And those are found in substances like flame retardants and pesticides. So, veterans who are exposed to these chemicals during their service may be entitled to service connection for that. However, there is no presumption, unlike the Agent Orange presumption.

So, that said, additionally, veterans who have been exposed to military burn pits who later develop a thyroid condition may qualify for VA disability compensation based on that exposure. Again, there currently is no presumption for the thyroid conditions related to the burn pit exposure, maybe in the future though.

And that will pretty much wrap up things for this afternoon. So, you can find out more information on thyroid conditions, VA presumptions, disability compensation, and other topics discussed in this video on our blog. Be sure to check out our other YouTube videos as well, and don’t forget to subscribe to our channel.

Thanks for joining us.