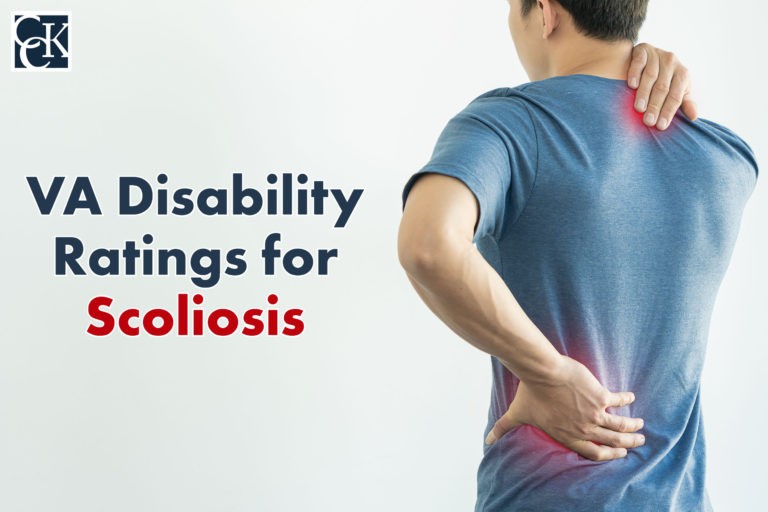 Scoliosis is a condition that arises when the spine has an abnormal curvature.  Veterans who developed scoliosis during their service may be eligible to receive VA disability benefits for their condition.

Scoliosis occurs when the spine has a twist or a curve.  People with scoliosis may have a curve in their spine so that the spine looks more like the letters “S” or “C” rather than a straight line.  The curvatures in the spine may cause the person’s shoulders or waist to appear uneven.

Scoliosis cannot be caused by poor posture or vigorous activity, contrary to popular belief.  Typically, scoliosis is diagnosed in childhood or early adulthood.  According to the American Association of Neurological Surgeons, scoliosis affects 2-3 percent of the United States’ population.

The first step to becoming service-connected for scoliosis is to obtain a diagnosis of scoliosis from a doctor.  Additionally, there will need to be a nexus, or link, between the veteran’s scoliosis and their military service.  This could mean that the veteran’s service caused their scoliosis, or aggravated it.  As scoliosis can be caused by spinal injuries, injuries to the spine which occurred during service may be a potential cause of scoliosis.

A nexus letter can connect the veteran’s service to their scoliosis.  It will need to be provided by a medical provider, and often will draw upon medical evidence.  In order to link the veteran’s condition to service, there will likely need to be evidence of an in-service event, illness, or injury.  A positive medical nexus will indicate that the veteran’s scoliosis is “at least as likely as not” caused or aggravated by their service.

Secondary service connection refers to when a veteran has an already service-connected condition that caused or aggravated a secondary condition.  In cases of scoliosis, the veteran may be primarily connected for a spine injury, a neurological disorder, or a muscular disorder, which then caused scoliosis.

Once a claim has been filed for scoliosis, VA may request a Compensation and Pension (C&P) exam.  To schedule this exam, VA will usually call the veteran or send a letter, so it is important to make sure that VA has the veteran’s most up-to-date contact information.  It is also important to follow up with scheduling the exam and to attend, otherwise, VA could deny the veteran’s claim.

Scoliosis is a condition that may be rated on how it limits a veteran’s range of motion.  In these cases, the examiner may use a tool called a goniometer during the exam to obtain an accurate measurement of range of motion.

The exam itself could last anywhere from a few minutes to several hours.  Once the exam is finished, the examiner will send their report to VA.  The veteran may request a copy of this report for themselves.

While scoliosis does not have its own disability rating, VA does have a general rating formula for spine conditions.  In most cases, VA uses the General Rating Formula for Diseases and Injuries of the Spine, combined with the limitations on range of motion, to issue a disability rating.  Under 38 CFR § 4.71a, VA generally rates low back conditions as follows:

Additionally, VA rates intervertebral disc syndrome (IVDS) under Diagnostic Code 5243, which focuses on the number of incapacitating episodes veterans experience as a result of their low back pain, which may be caused by scoliosis.  Here, VA defines an incapacitating episode as a period of acute signs and symptoms that requires bed rest as prescribed by a physician.  IVDS is rated as follows:

In this case, VA should apply the rating criteria that results in the higher evaluation for the veteran.

Scoliosis, Low Back Pain, and Flare-Ups

A flare-up is defined as a sudden and temporary increase in symptoms.  Flare-ups are typically recurrent, but unpredictable and arise without warning.  The abrupt escalation in symptoms, including pain and loss of mobility, can sometimes result in complete incapacitation as described above.

If the veteran becomes service-connected for a spine or back condition, the presence of flare-ups could impact the disability rating they are given.  Specifically, a higher rating may be awarded when there is additional loss or limitation of motion due to pain during flare-ups.  Scoliosis may cause low back pain which occurs during these flare-ups.

For example, a veteran is granted service connection for a low back condition and receives a 10 percent disability rating.  On most days, the veteran is unable to bend forward more than 60 degrees.  However, when experiencing a flare-up, the veteran is unable to bend more than 30 degrees.  Therefore, during the flare-up, the veteran’s low back condition becomes much more disabling than 10 percent.  As such, VA should assign a disability rating in accordance with this additional loss.

Veterans with scoliosis may be prevented from obtaining or maintaining substantial employment because of their condition.  These veterans may be eligible for a monthly VA disability benefit called TDIU, or total disability based on individual unemployment.  This benefit compensates veterans at the 100 percent rating level, even if their disability rating for their scoliosis is less than 100 percent.

There are generally two ways to seek eligibility for TDIU:

The rating given for service connection for scoliosis may also be combined with another condition to help the veteran achieve the criteria for schedular TDIU.

Getting Help with VA Disability Benefits for Scoliosis

Scoliosis can be a tricky condition to become service-connected for, as the condition itself does not have its own diagnostic code.  If your VA disability claim for scoliosis has been denied, the accredited VA disability lawyers at Chisholm, Chisholm & Kilpatrick may be able to help.  Contact us at 800-544-9144 for a free consultation to see if we can assist.