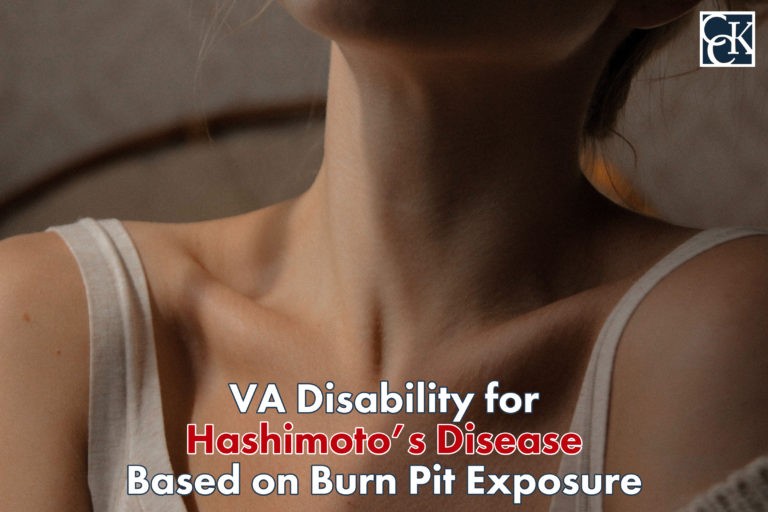 What is Hashimoto’s Disease?

Over time, the thyroid gland can weaken, which may impair the production of thyroid hormones.  This could lead to a decrease in thyroid function, or hypothyroidism.  The condition may affect any age group, but most commonly affects middle-aged women.

Complications that Can Arise from Hashimoto’s Disease

Importantly, having Hashimoto’s disease does not automatically mean a person has hypothyroidism.  To diagnose Hashimoto’s disease, a doctor may perform a physical examination and blood tests.  These blood tests can measure a person’s hormone levels and determine how effectively the thyroid is functioning.

When a veteran files a claim for Hashimoto’s disease, VA may request a Compensation and Pension exam, or C&P exam.  To request an exam, VA may send the veteran a letter or call them.  It is important to follow through with scheduling and attending this exam, otherwise, VA could deny the veteran’s claim.

The exam will usually be performed by a VA physician or a VA contracted physician.  Before the exam, the examiner will review the veteran’s c-file.  This will contain any documentation that has previously been submitted to VA, as well as the veteran’s medical and service records.

Veterans who served in the post-9/11 era may have been exposed to toxins emitted by military burn pits that were used during this time period.  As a result of this exposure, many veterans have developed Hashimoto’s disease, as well as hypothyroidism in some cases.

Military burn pits are large areas of land where waste was incinerated by the military and its contractors.  The United States Military used burn pits as part of its waste disposal protocol in places such as Iraq and Afghanistan in the post-9/11 era.  The practice was effective in reducing large quantities of waste, but the pits emitted plumes of toxic smoke.  The following materials have been linked to military burn pits:

What Conditions Have Been Linked to Burn Pits?

Currently, there is little conclusive research on the long-term health impacts of burn pits.  TCDD, the main dioxin released by burn pits, was also one of the major toxins in Agent Orange.  TCDD has been linked to cancers and other serious disabilities.

VA does not have a consistent approach to deciding these claims, so lay evidence from veterans is key to winning burn pit claims.  Often, VA does not have a way of proving veterans were near burn pits, so statements from the veteran themselves or buddy statements can help prove exposure.  The following conditions have been linked to burn pit exposure:

As of 2021, there are several major bills currently pending in the Senate and the House of Representatives that deal with the toxic exposure caused by burn pits.  These bills include:

Any of these bills, if passed, would offer much-needed relief to veterans suffering the toxic effects of burn pit exposure.  However, none of the proposed bills include hypothyroidism or Hashimoto’s disease as presumptive conditions.

In 2021, the National Defense Authorization Act added hypothyroidism, and two other conditions, to the list of presumptive conditions for which VA grants service connection for veterans who were exposed to Agent Orange during their service.  Specifically, in order to be eligible for presumptive service connection for hypothyroidism, the veteran needs to have served in one of the following locations during the specified time frames:

Essentially, the addition of hypothyroidism to the list means that veterans do not have to prove a medical nexus between their condition and their military service.

During the Vietnam War, the United States used several herbicides to destroy its enemy’s crops.  The goal was to interrupt their food supply and destroy foliage in the jungle to increase visibility and prevent ambush attacks.

Among these chemical agents, and perhaps the most well-known of the “rainbow herbicides” used during the Vietnam War, was an herbicide called Agent Orange.  Agent Orange contained a mixture of two kinds of herbicide agents (i.e., 2,4-D and 2,4,5-T).  However, as a byproduct of its production, it also contained the highly toxic dioxin contaminant 2,3,7,8-TCDD.

As a result of this dioxin contaminant, many veterans who were exposed to Agent Orange have developed serious health conditions.  Hypothyroidism is one of these conditions.

The Link between Agent Orange and Burn Pits

Veterans who are prevented from working because of their Hashimoto’s disease may be able to receive a monthly VA disability benefit called total disability based on individual unemployability, or TDIU.  This benefit compensates veterans at the 100 percent rating level, even if their disability rating may be less than that.

There are generally two pathways to prove eligibility for TDIU:

Getting Assistance with VA Disability Benefits for Hashimoto’s Disease

As Hashimoto’s disease is currently not a presumptive condition for military burn pit exposure, it can be difficult to become service-connected for this condition.  This can lead to much frustration for veterans seeking VA disability benefits for their condition.  Additionally, the way in which VA rates Hashimoto’s disease can seem complicated and hard to differentiate from hypothyroidism.

A VA accredited lawyer or representative can be helpful for veterans trying to navigate VA law for their Hashimoto’s disease.  If you need assistance filing an initial claim or appealing a denial of VA disability benefits for Hashimoto’s disease, the VA disability lawyers at Chisholm Chisholm & Kilpatrick may be able to help.  Contact us at 800-544-9144 for a free consultation with our office.