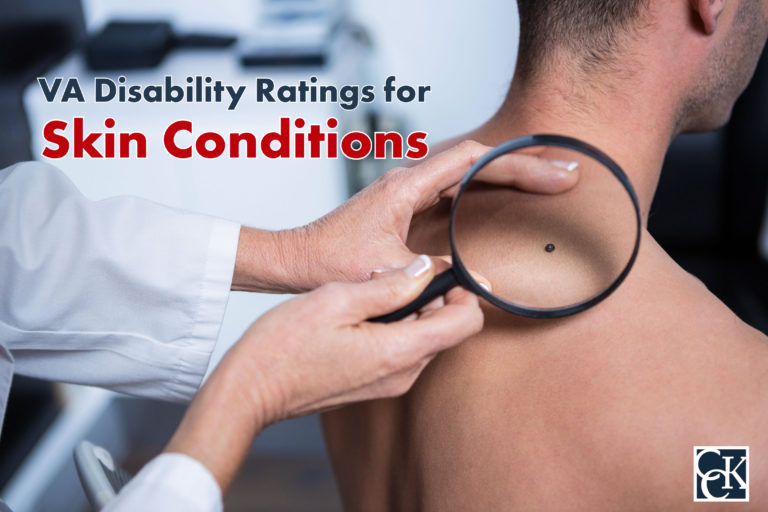 In August 2018, VA made updates to all 15 body systems included in the Veterans Affairs Schedule for Rating Disabilities to reflect modern medicine more accurately and provide clearer rating decisions.  In doing so, VA made changes to how it evaluates conditions related to the skin.

Although no conditions were removed from the new rating schedule for skin conditions, several diagnostic codes were restructured or revised.  Importantly, claims pending prior to August 13, 2018 will be considered under both the old and new rating criteria, and whichever is more favorable will be applied.

There are many skin conditions for which VA assigns ratings, and for which veterans can receive monthly VA disability benefits upon service connection.  Below are some of the most common skin conditions affecting veterans:

As mentioned above, veterans who were exposed to certain chemicals or toxins during their service may be eligible for presumptive service connection.

Veterans who were exposed to herbicide agents while serving in Vietnam and developed chloracne or porphyria cutanea tarda within one year of exposure to a degree of 10 percent disabling are afforded presumptive service connection.  Chloracne is a condition where the skin breaks out with different forms of acne such as blackheads, pimples, and cysts while porphyria cutanea tarda is a disorder, which causes painful skin lesions or blisters.

As of the PACT Act, veterans with active military, naval, air, or space service who served in the following locations during the following time periods may qualify for this VA presumption:

Gulf War veterans with chronic skin conditions, such as dermatitis, or other chronic undiagnosed skin disorders, can be eligible for presumptive service connection at any time if the condition can be rated at 10 percent or higher.  For VA purposes, the Persian Gulf War refers to service in the Southwest Asia theater of military operations beginning on August 2, 1990.  At present time, the period for the Persian Gulf War extends to December 31, 2026.

As of the PACT Act of 2021, “covered veterans” exposed to toxins during their military service can qualify for qualify for presumptive service connection for melanoma, a severe form of skin cancer.  A covered veteran is defined as the following:

VA rates skin conditions under 38 CFR § 4.118, Diagnostic Codes 7800-7833.  A number of skin conditions are rated based on the amount of skin that is affected.  VA’s rating schedule proposes two ways to determine this: calculations and estimations.

On the other hand, disability ratings for scars on areas of the body other than the head, face, or neck are generally based on the size of the scar.

The General Rating Formula for the Skin is included in 38 CFR § 4.118 and is used to rate the majority of skin conditions:

Additionally, veterans may also qualify for Temporary and Total ratings while they are hospitalized or recovering from hospitalization for a skin condition.  An example of this may be if a veteran is undergoing radiation treatment for their skin cancer. 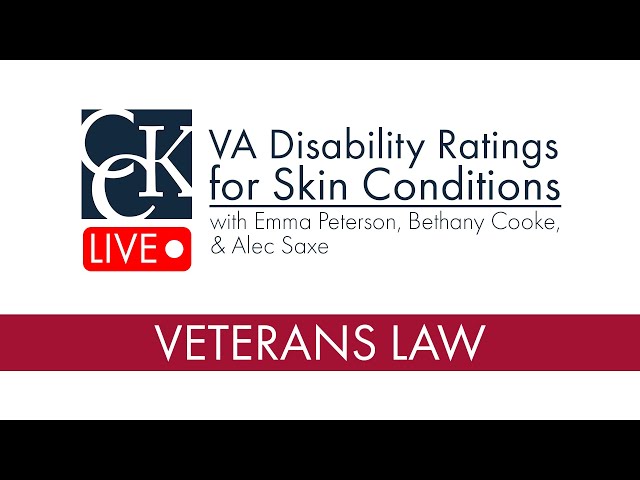 Like skin conditions, VA also awards service connection for scars.  Scar disabilities are rated under 38 CFR §4.118, diagnostic codes 7800-7805.  Scars are rated based on the number of scars or disfigurements a veteran has, the area of the body affected, their permanence, and the presence of pain or instability.

Scars can be rated anywhere from 0 to 80 percent, depending on the diagnostic code (DC) used.

Pyramiding and Ratings for Skin Conditions

Skin conditions are often difficult to categorize because each condition can have many different causes and symptoms.  As such, veterans often run into problems with pyramiding—the VA term for rating the same disability, or same manifestation (i.e., symptom) twice.  Pyramiding is prohibited in VA disability claims by federal law.

However, multiple ratings for skin conditions can be given as long as each condition has a clear and distinct diagnosis, and each condition affects a different area of skin.

For a single condition that affects different skin areas, VA assigns a single rating under that condition which takes into account all affected areas.

For multiple conditions that affect the same area, VA will only rate the condition that gives the higher rating.

Getting Help with VA Claims for Skin Conditions

The VA disability lawyers at Chisholm, Chisholm & Kilpatrick may be able to help with your skin condition appeal.  For a free case evaluation, call our office today at 800-544-9144.