Pyramiding: How to avoid stacking your VA ratings Pyramiding is the VA term for rating the same disability – or same manifestation (i.e. symptom) of a disability – twice. The term comes from a federal law – “Avoidance of pyramiding” – that prohibits the practice in VA disability claims.

The rule sounds simple enough, but disabilities can manifest in unusual ways. A veteran’s symptoms may not always line up with the set of symptoms VA lists for each diagnosis in their rating guide, the VA Rating Schedule. A veteran might experience the same, or overlapping, symptoms as a result of two separate conditions. This is particularly true for veterans with multiple diagnoses of particular types of conditions – like mental health conditions or respiratory conditions – because symptoms from these groups so frequently overlap.

To determine disability ratings, VA officials who rate veterans’ disabilities – we’ll refer to them as VA raters – use a detailed guide called the VA Schedule of Rating Disabilities – or, more simply, the VA Rating Schedule. The VA Rating Schedule is organized by groups of conditions affecting different bodily systems. Sections include, for example, the Musculoskeletal System, the Respiratory System, and Impairment of Auditory Acuity.

Each group contains a list of conditions – disabilities or diseases – each with its own diagnostic code. A diagnostic code is what VA raters use to determine the severity of each of your conditions and thus what your rating percentage will be. Under each diagnostic code, VA gives raters instructions on which combinations of symptoms equate to different rating levels (typically increments of 10 percentage points). The determined rating is then used to calculate the veteran’s combined rating, which determines the amount of compensation he or she will receive each month. VA rates your symptoms, not your diagnosis

It’s important to note that, in VA’s Rating Schedule, the rating levels under each diagnostic code are based on the symptoms a veteran is experiencing rather than the veteran’s diagnosis or the severity of their original in-service injury or illness. In other words, VA compensates you for the effects of your condition, not for the fact that you have a condition.

The Pyramiding Rule states, “The evaluation of the same disability under various diagnoses is to be avoided.” This can be confusing because many disabled people consider their “disability” to be more or less the same thing as their “diagnosis.” But if we take into account that VA rates symptoms – or “residuals,” as they often call them – using diagnostic codes, we can use that knowledge to translate the VA’s phrase as “The evaluation of the same symptom under various diagnostic codes is to be avoided.”

Say VA has already granted service connection for a veteran’s Post-Traumatic Stress (PTSD) related to an in-service combat event. In addition to experiencing flashbacks, hypervigilance, and social isolation, the veteran has severe trouble falling and staying asleep (i.e. sleep impairment) and is highly irritable, even hostile, around others.  His PTSD rating takes those symptoms into account.

Later, it becomes clear that the veteran also suffered a Traumatic Brain Injury (TBI) from the same combat event that caused his PTSD. Sleep impairment and irritability, in addition to being symptoms of PTSD, are core symptoms of TBI as well.

If the veteran was being rated for just one of these conditions (TBI or PTSD), the symptoms of sleep impairment and irritability would be factored into a VA rater’s assessment of how high the veteran’s TBI rating or PTSD rating should be. The presence of those symptoms, in other words, would serve to ‘bump’ the veteran up to a higher rating level, depending on the severity of the other symptoms he is experiencing.

But the veteran now has diagnoses of both PTSD and TBI. The Pyramiding Rule states that a particular symptom (or residual) – we’ll use sleep impairment for this example – cannot be rated twice.

What would make it pyramiding?

It would also be considered pyramiding if irritability, in addition to sleep impairment, had been considered in determining the ratings for PTSD and for TBI. What would NOT make it pyramiding?

To avoid pyramiding in situations where symptoms overlap like this, VA considers the symptom when determining the rating for one condition and does NOT factor it in when rating the other condition. In our example, then, VA would take into account the veteran’s sleep impairment and irritability when rating his TBI but not his PTSD. 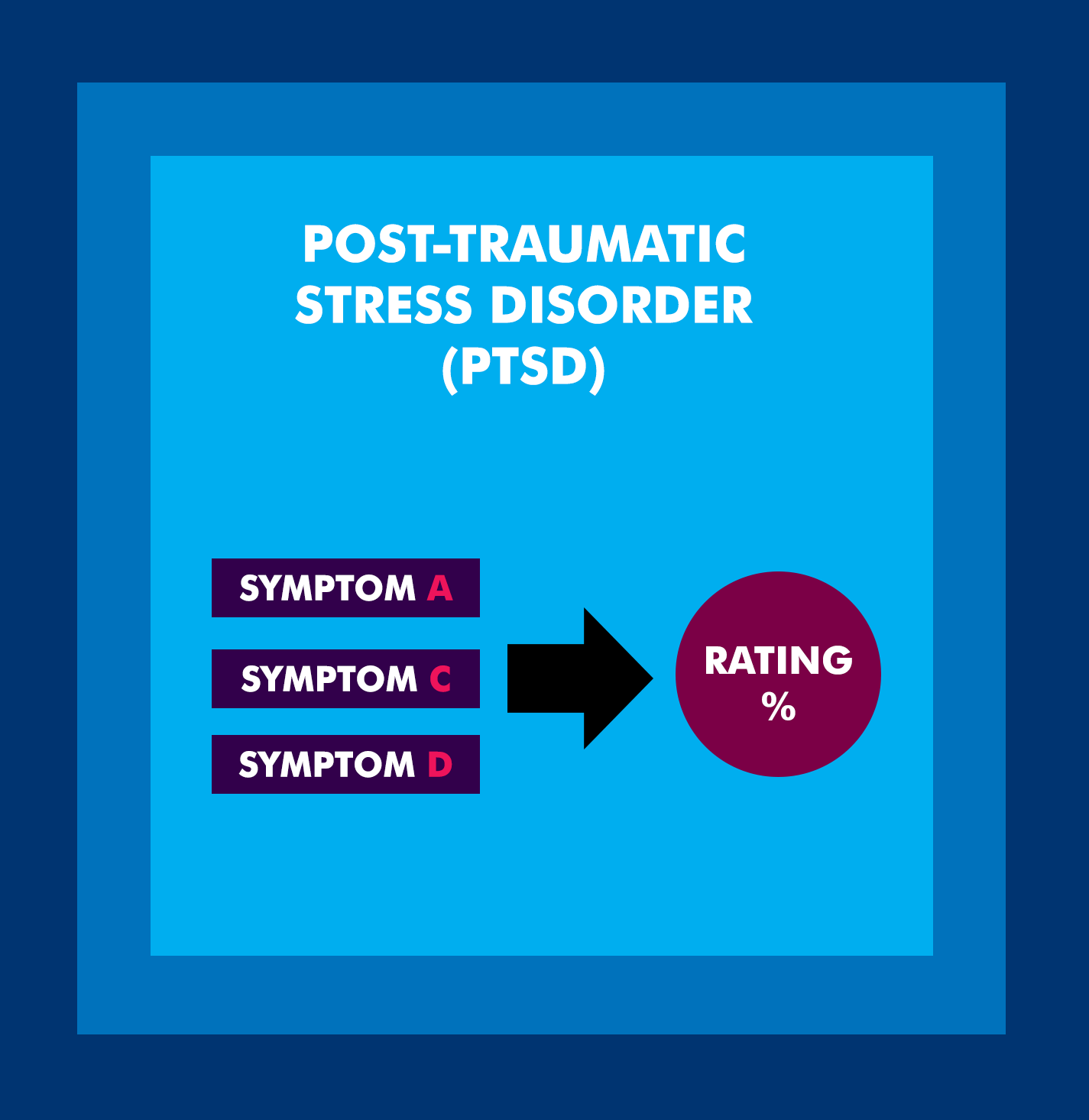 How does VA decide which diagnostic code the symptom should be considered under?