What Evidence Will VA Require for My Disability Compensation Claim? Evidence is crucial to winning a VA disability compensation claim.  VA uses a veteran’s military records, medical records, personal statements, and more when making the determination on whether they are entitled to service-connected compensation.

What Do Veterans Need to Prove?

For claims for an increased rating of a service-connected disability, veterans may need medical evidence or other proof that their disability has worsened.

What Is VA’s Standard of Proof?

There are several ways a veteran can obtain these records as evidence. A veteran can: 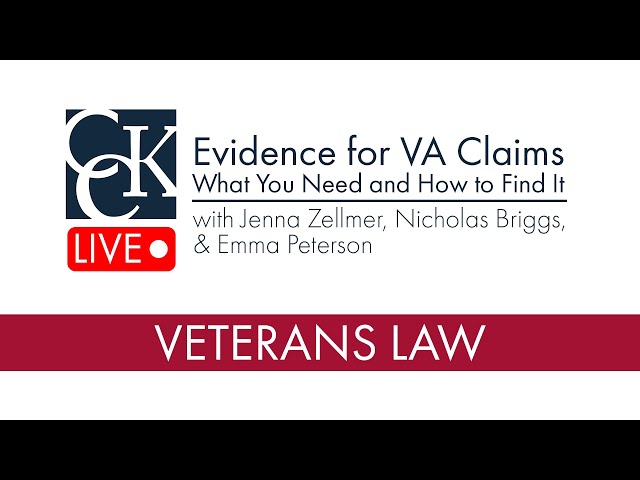 Will VA Help Get My Records For Evidence?

VA has what is called a “duty to assist” veterans in obtaining evidence in support of their VA claim.  As part of their duty to assist, VA will also notify veterans of what VA claim evidence they need to obtain in order to be successful in their claim. Compensation and Pension examinations (C&P) are often ordered as a part of VA’s duty to assist.

As part of VA’s modernized appeals system alters when VA will have the duty to assist veterans in their claims.  The New Appeals Process offers veterans the chance to opt in to one of three lanes to appeal a VA decision: Higher Level Review, Supplemental Claim, and an appeal directly to the Board of Veterans’ Appeals.  The Supplemental Claim lane is the only lane in which VA has the duty to assist veterans in obtaining evidence for their claim.

Medical records can be important pieces of evidence to a veteran’s claim to prove that they have a current, diagnosed disability to prove service connection or prove that their condition has worsened if they are seeking an increased rating.  These are some of the different types of medical evidence a veteran can use for VA claim evidence:

Employment records can become a necessary piece of VA claim evidence if a veteran is seeking entitlement to Total Disability Based on Individual Unemployability (TDIU). TDIU is a VA disability benefit that compensates veterans at the 100% disability rate if they have a service-connected disability or disabilities that render them unable to work.

Employment records can also be helpful in claims for increased ratings, as difficulty performing a job or receiving special accommodations at work due to a service-connected condition can help show VA the level of severity of that disability.

Some employment records that can be helpful as VA claim evidence are:

Is There a VA Form for Lay or Buddy Statements?

VA does have a form for veterans to use to submit statements.  This form is VA Form 21-10210, “Lay/Witness Statement.”  The first section of the form requires information to identify the veteran, such as name, social security number, date of birth, and contact information.

Section III is where the statement will be written.  The statement can be handwritten directly on the form or typed up.  If more space is needed, an addendum, or extra pieces of paper, can be attached to the form.  If an addendum is attached, the veteran should be sure to note that on the form.

Lastly, the person writing the statement should sign at the bottom of the form.  This certifies that the information in the statement is true to the best of their knowledge.

Hearings before the Board of Veterans’ Appeals can be used as evidence in support of a veteran’s claims.  They allow a veteran to speak with a Veterans Law Judge directly to explain their case.  All hearings are transcribed so VA has a written record of what was said.

However, hearings do have drawbacks.  One disadvantage of requesting a hearing is that they can often take months and even years to schedule.  This can add a significant delay in a veteran receiving a decision on their claim.

Lay statements can serve a similar purpose as a hearing in terms of presenting evidence and arguing entitlement, but do not require the lengthy waiting process.

When Should Veterans Submit Evidence?

A good time to submit VA claim evidence can be after an initial VA decision.  Once a veteran files a claim, VA will issue a decision either denying or granting that claim.  If VA denies the claim, they will provide reasons as to why they denied the claim.  This can be useful to determine what additional evidence a veteran may need to submit to prove their claim and receive a grant of benefits.

Another strategic time to submit VA claim evidence is when filing an appeal to the Board of Veterans’ Appeals.  Having a complete record of evidence is important because if the Board issues a denial, a veteran is not able to submit new evidence in an appeal to the Court of Appeals for Veterans Claims.  At that point, the veteran’s record is closed and the Court reviews the record as it was before the Board; no additional evidence will be considered.

Where Is All This Evidence Held?

Veterans can request a copy of their claims file directly from VA.

Claims for service connection for Post-Traumatic Stress Disorder require a specific type of evidence called a stressor in order for VA to grant entitlement to benefits.  A stressor is an event or incident in service that caused the veteran’s PTSD.

If a veteran’s stressor is related to a combat experience and he or she is a combat veteran, the veteran’s lay statement alone can establish that stressor.

Military Sexual Trauma (MST) is a specific type of PTSD stressor in which a veteran experienced a physical assault or battery of a sexual nature, or sexual harassment while in service.  MST is not only linked to PTSD, veterans may also experience depression, anxiety, or even a physical diagnosis associated with MST.

In cases of MST, VA cannot state that a lack of evidence of the incident is negative evidence against the veteran’s claim.  This comes from a recognition that incidents of MST are not always reported in service.  If there is no report of the incident, veterans can use performance reports, requests to transfer stations, or other service records to indicate any behavioral changes as a way to establish that they experienced a traumatic event.

VA recognizes certain conditions as presumptively related to service for veterans with qualifying service, for example, Agent Orange exposure in Vietnam or exposure to environmental hazards during the Gulf War.  In these cases, veterans do not have to submit a medical nexus linking their condition to service.  VA will presume that the veteran’s exposure caused their current condition if they qualify under the presumptions.

For example, if a veteran served in the Republic of Vietnam during the Vietnam War and is later diagnosed with a condition on VA’s list of conditions that are presumptively due to Agent Orange exposure, VA will presume that the veteran’s service caused their condition.

Evidence in Cases at the Court of Appeals for Veterans Claims

Veterans can file appeals to the Court of Appeals for Veterans Claims if they receive an unfavorable decision from the Board of Veterans’ Appeals.  When a veteran’s case goes to Court, the record becomes closed and the veteran is not able to submit additional evidence.

The Court decides the case on the closed record because the Court looks at cases to determine if the Board properly applied the law and if they properly assessed the evidence they had before them at the time of the decision.

Filing for disability compensation is a stressful process, particularly when you are dealing with medical and financial hardships.  If you need assistance in navigating the claims and/or appeals process, the team at Chisholm, Chisholm & Kilpatrick is ready to help.  Contact our veterans lawyers for a free case evaluation.