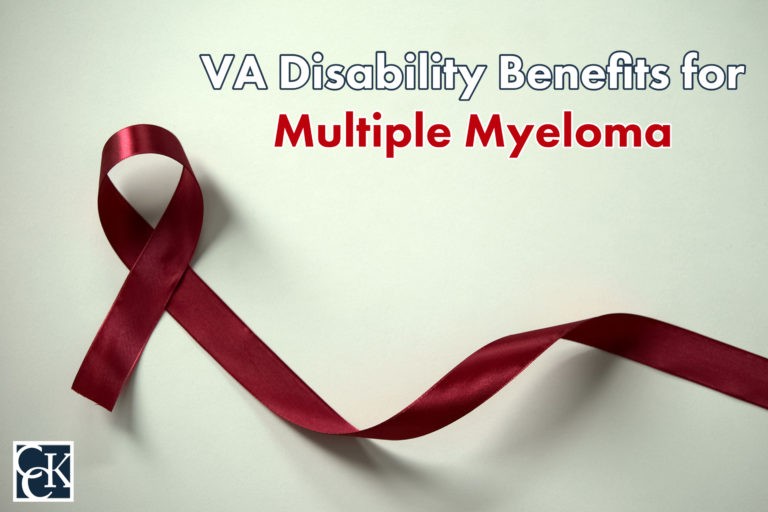 What is Multiple Myeloma?

Side Effects and Symptoms of Multiple Myeloma

Multiple myeloma can be difficult to detect early as symptoms are often not apparent until it has reached an advanced stage.  The symptoms may also be vague and could take the appearance of other diseases at first.  In order to diagnose multiple myeloma definitively, tests will usually need to be performed.  Some tests may include:

There are multiple forms of treatment that may be used to treat multiple myeloma.  Treatments may include:

To request an exam, VA may send the veteran a letter or call them.  It is very important to ensure that VA has the most up-to-date contact information, so that the veteran does not miss any exam requests.  Additionally, it is also important to follow through with scheduling this exam, and to attend, otherwise VA could deny the veteran’s claim.

The exam will usually be performed by a VA physician or a VA contracted physician.  Before the exam, the examiner will review the veteran’s c-file.  This will contain any documentation that has previously been submitted to VA, including the veteran’s medical and service records.

The veteran may also use a DBQ, or Disability Benefits Questionnaire, to bolster their claim.  A Disability Benefits Questionnaire is a form VA created to allow veterans to address important aspects of their condition, such as symptoms, severity, possible causes, and relation to other disabilities.  The veteran may also have their private doctor fill out a DBQ for them.  In claims for multiple myeloma, DBQs can be helpful because a specialist, such as the ones listed previously, who treats the veteran for their multiple myeloma can speak to the condition in greater detail.

Multiple myeloma is rated under 38 CFR § 4.117, Schedule of ratings – Hemic and Lymphatic Systems.  However, multiple myeloma does not have its own diagnostic code (DC).  Instead, it is given an analogous rating – ratings given to conditions that are not explicitly included in VA Schedule for Rating Disabilities.  The analogous rating is based on what condition most closely matches the overall symptoms or treatment of the disability that VA is trying to rate.

Therefore, as multiple myeloma is found to be related to both lymphoma and leukemia, it is rated analogous to either Hodgkin’s disease (DC 7709) or Leukemia (DC 7703).  If rated analogous to Hodgkin’s disease, the 100 percent disability rating is assigned if the cancer is active or undergoing treatment.  The 100 percent rating continues for six months after the last treatment, and the condition is then re-evaluated based on the ongoing symptoms.

If rated analogous to Leukemia, the 100 percent rating is also assigned when the cancer is active and continues for six months following the last treatment.  Then, the condition is rated as either anemia or aplastic anemia, whichever gives the veteran the higher rating.

Veterans who were exposed to Agent Orange and developed multiple myeloma, are entitled to the presumption of service connection described, so long as they can prove they served in qualifying locations and time periods.  Specifically, such veterans do not have to prove a connection between their multiple myeloma and military service to be eligible to receive VA health care and disability compensation.

In regard to Agent Orange exposure, VA has established a presumption of exposure for the following locations and time periods:

Importantly, a presumption of exposure replaces the element of service connection that requires veterans to have an in-service event or symptoms that caused their disability.  In these instances, VA counts the exposure as the in-service event.  In addition to a presumption of exposure, VA also offers a presumption of service connection in which it presumes a veteran’s condition was caused by their military service.  Here, VA presumes that certain diseases are caused by a veteran’s exposure to Agent Orange, with multiple myeloma being one of them.

The U.S. Military used burn pits as part of their waste disposal protocol in places such as Iraq and Afghanistan in the post-9/11 era during Operations Iraqi and Enduring Freedom.  While the practice was effective in reducing large quantities of waste, burn pits emitted plumes of toxic smoke.  This was especially problematic in places such as the Middle East where the desert wind carried the smoke for miles.

Research continues to be done to link burn pit exposure to a variety of different conditions, such as cancers and respiratory conditions.  To fully understand the harm caused by military burn pits, further research will need to be done.  However, research has indicated that one of the known chemical compounds released by burn pits includes the dioxin called TCDD which was also found in Agent Orange.

Multiple myeloma can be a confusing and frustrating condition to be granted VA disability benefits for, as it is eligible for presumptive service connection for Agent Orange exposure, but not military burn pit exposure.  Therefore, these claims are often denied.  However, a denial does not mean the end of the road.

The experienced team of accredited VA disability attorneys at CCK may be able to help you secure VA disability benefits for multiple myeloma.  Contact our office today for a free consultation at 800-544-9144.