According to the Department of Veterans Affairs (VA), the rate of kidney disease is estimated to be 34 percent higher in the veteran population than in the general population.  This may be due to the prevalence of type 2 diabetes and hypertension (i.e., high blood pressure) among veterans, which are some of the leading risk factors for kidney disease.  Veterans often develop such conditions due to the nature of military service.

Conditions affecting the kidney can often feel debilitating and overwhelming.  If you have a service-related kidney disease, you may be eligible to receive VA disability compensation.

What Is Kidney Disease?

The kidneys are two organs in the renal system that sit on either side of the spine.  They work to filter the blood in the body and help dispose waste as urine.

Kidney disease is a blanket term for several types of conditions in which the kidney gradually loses function.  These conditions occur when damage to the kidneys impacts the body’s ability to regulate blood pressure and filter waste, leading to serious health problems.

The following are the types of kidney disease, their symptoms, and potential causes and risk factors.

Acute kidney failure, or acute kidney disease, can occur when the kidneys become unable to filter the blood in the body.  This can lead to high levels of waste accumulating in the blood.  Acute kidney failure commonly affects people who have already been hospitalized, occurring often in those who are critically ill and need intensive care.

Sometimes acute kidney failure can occur without any signs or symptoms.  In this case, lab work will likely detect the issue.

The following conditions can increase the chances of a person developing kidney disease:

Diabetic nephropathy, also known as diabetic kidney disease, is most often a complication of Type 1 and Type 2 diabetes.  Diabetes can damage blood vessel clusters in the kidneys.  Such damage can limit the kidneys’ ability to filter water from the blood.  High blood pressure may also accompany this kidney condition and could increase the damage to the kidneys.

It is important to seek treatment for diabetic nephropathy if displaying symptoms.  A doctor will be able to perform a urine test and/or a blood test to determine if the kidneys are functioning successfully.

There are some factors that can increase the risk of diabetic nephropathy, including:

The best ways to prevent diabetic nephropathy are to treat diabetes with medication, manage high blood pressure, maintain a healthy weight, and refrain from smoking.

Chronic kidney disease (CKD), or chronic kidney failure, refers to the gradual loss of use of the kidneys.  This essentially means that the kidneys can no longer filter waste from the blood and body as they should.  Without successful filtration from the kidneys, dangerous amounts of fluids, electrolytes, and waste can build up in the body.

Chronic kidney disease most often occurs when another condition or disability damages the kidneys over time.  Below are some examples of conditions which might damage the kidneys:

End-stage renal failure, or end-stage kidney disease, occurs when chronic kidney disease reaches an advanced stage.  This means that the gradual loss of kidney function has progressed to the point where the kidneys can no longer function to meet the body’s needs.

Many of the same conditions which lead to chronic kidney disease can also lead to end-stage renal failure. 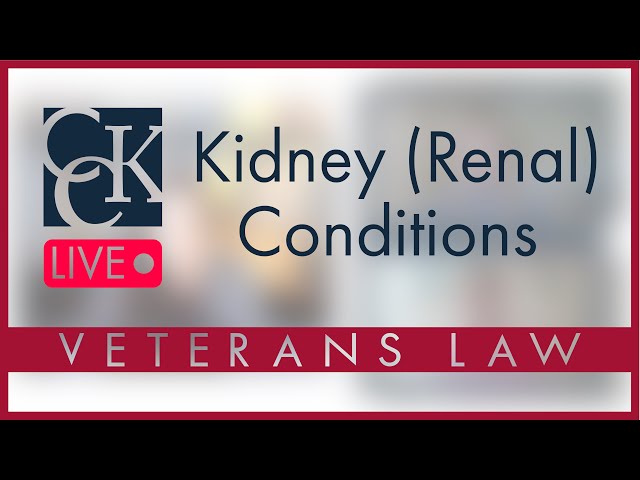 Blood tests may also measure for blood urea nitrogen (BUN).  Urea nitrogen enters the blood through food.  Normal BUN levels typically range between 7 and 20.  If the kidneys are not functioning at a normal level, the BUN level will be higher.

Additionally, a urine test may also be used.  Urine tests are typically conducted by placing a dipstick in a urine sample.  The dipstick will then change colors to indicate abnormalities in the urine.  Urine tests can determine if there is protein in the person’s urine.  If there are significant amounts of protein, or albumin, in the urine, it may indicate that the person is experiencing kidney disease.

Other tests that may be used to determine kidney disease include ultrasounds or CT scans to examine pictures of the kidneys.  The results from these tests can help determine if there are any abnormalities in the size, shape, or position of the kidneys.

Once a diagnosis of kidney disease has been given by a doctor, a veteran can use this to apply for disability compensation benefits from VA.

If you developed kidney disease due to your military service, you may qualify for disability compensation benefits from VA.  VA rates kidney disease under the 38 CFR § 4.115a, Ratings of the Genitourinary System – Dysfunctions, which includes both the organs of the reproductive system and the urinary system.  Specifically, kidney diseases are rated using the criteria for renal dysfunction.

There are five rating percentages for renal dysfunction/kidney disease, which are primarily based on:

The criteria for each VA rating for kidney disease are as follows:

Veterans with stage 4 chronic kidney disease (i.e., severely reduced kidney function, a GFR of 15 to 29) are rated at 80 percent, while veterans with end-stage renal failure are generally given a 100 percent disability rating.

What Is the VA Disability Rating for Kidney Stones?

Kidney stones, also known as nephrolithiasis, are primarily rated under 38 CFR § 4.115b, diagnostic code 7508.  Veterans with service-connected recurring kidney stones that require invasive or on-invasive procedures more than two times a year are rated at 30 percent.

For reference, renal colic occurs when a kidney stone gets lodged in a person’s urinary tract.  The stone then stretches and causes intense pain in the area.

Diabetes is a disease in which a person requires insulin because their body does not produce enough insulin or cannot use the insulin produced properly.  Insulin is the hormone that regulates the amount of sugar in the bloodstream at any given moment.

There are two types of diabetes that are most common: Type 1 and Type 2.

Diabetes can injure the small blood vessels in the body.  When the blood vessels are injured, the kidneys cannot properly filter the blood.  According to the National Kidney Foundation, type 2 diabetes is one of the leading causes of kidney disease.

The recently passed Honoring Our PACT Act has increased the presumptions available to veterans who may have been exposed to Agent Orange during their service, essentially making it easier for these veterans to receive VA disability benefits for conditions relating to their exposure.

VA has extended the presumption of herbicide exposure to include service members with active military naval, air, or space service who served in:

If you developed kidney disease after being exposed to the variety of toxins in the water at Camp Lejeune, the Honoring Our PACT Act may have recently enabled you to receive compensation.

The PACT Act has created a federal cause of action for an individual, including veterans, who resided, worked at, or otherwise was exposed to Camp Lejeune’s water, including in utero exposure, for at least 30 days between August 1, 1953 and December 31, 1987.  This means that those exposed under the above criteria can sue the federal government for benefits related to exposure.

These claims for benefits are under the exclusive jurisdiction of the Eastern District of North Carolina.  Any awards that are granted are subject to offsets for federal benefits the claimant condition receives for the claimed condition.  The statute of limitations for the federal cause of action is two years from the date of passage of the Honoring Our PACT Act or 180 days after the claim is denied under 28 USC § 2675, whichever is later.

If VA denied your claim for kidney disease, the veterans’ representatives at Chisholm Chisholm & Kilpatrick LTD may be able to help.  The CCK team has decades of experience helping veterans successfully appeal VA denials and secure the benefits they deserve.  Call 800-544-9144 for a free case evaluation.