Post-traumatic stress disorder (PTSD) is a very common condition among veterans.  Symptoms of PTSD can often be debilitating and interfere with a veteran’s day-to-day life.  The Department of Veterans Affairs (VA) offers disability benefits for veterans who developed PTSD as a result of their service.  Continue reading to learn more about the different percentage rates for VA disability compensation for PTSD and the criteria needed to qualify for them.

Post-traumatic stress disorder is a mental health condition that can affect people who have experienced or witnessed a traumatic event.  This could be through a natural disaster, an accident, a terrorist attack, war or combat, sexual assault, or any other form of assault.  Those who experience PTSD may have intense feelings or thoughts which can be disturbing and affect their life long after the trauma has ended.  They may also experience flashbacks or nightmares, or feelings of great sadness, anger, or fear.

It is also common that PTSD can take years to manifest.  This means that veterans who experience PTSD may not display symptoms for years after their trauma. 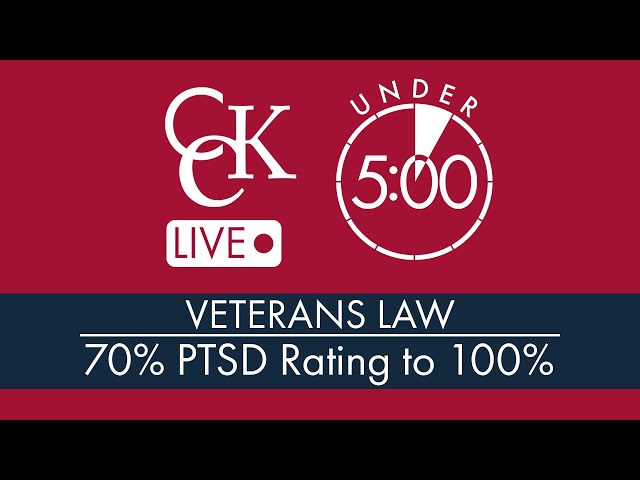 Common Stressors for Veterans with PTSD

A stressor is another word for the trauma which can cause post-traumatic stress disorder or PTSD.  For veterans, stressors could relate to exposure to danger, an injury, or an assault.  Generally, VA categorizes stressors as combat-related or non-combat-related.  Below are some examples of both types of PTSD stressors.

With the exception of eating disorders, VA regulates all mental health conditions on the same criteria.  Mental health conditions may be rated at 0, 10, 30, 50, 70, or 100 percent under VA’s General Rating Formula for Mental Disorders (38 CFR § 4.130).  The requirements for service connection at each rating level are listed below.

Getting an Increased VA Rating for PTSD

If a veteran receives a decision and feels that they have been rated too low, they may submit a claim for an increased rating.  Veterans may submit additional evidence to bolster their claim.

There are two ways to file a claim for an increased rating for PTSD.  If the veteran is within the appeal window for a decision, meaning within one year of the date of a rating assignment, then they may file an appeal of the decision which will keep the claim open and pending.  If the veteran is not within the appeal window, they may file a new claim for an increased rating.

Another option to secure an increased rating is by filing for TDIU, or total disability based on individual unemployability.  If a veteran can prove that their PTSD prevents them from working, they may qualify for TDIU.  TDIU allows a veteran to be compensated at the 100 percent rating level without having a 100 percent combined rating.  Sometimes securing a higher rating can be difficult, so TDIU is a benefit that can be beneficial for veterans looking to secure the benefits of the 100 percent rating level.

The schedular requirements for Individual Unemployability are as follows:

Medical evidence can be useful to submit to VA in order to support a claim for TDIU.  This could include any records that indicate that the veteran’s PTSD was under-evaluated.   Records which show that the veteran’s PTSD inhibits their ability to work and that their symptoms do meet the criteria of a higher rating can be helpful.  Private medical opinions can also indicate this to VA.

PTSD can cause other conditions to develop.  A common example of this is a veteran developing sleep apnea on account of their PTSD.  If a veteran does have a condition which they believe was either caused or aggravated by their service-connected PTSD, they may wish to file for secondary service connection.  Secondary service connection can help increase the veteran’s overall combined rating, which can be beneficial in instances where the veteran might be having difficulty proving they meet the qualifications for an increased rating.

Examples of Conditions Secondary to PTSD

Getting Help with an Appeal for an Increased Rating for PTSD

If you need assistance appealing for an increased rating, the Veterans’ Law team at Chisholm Chisholm & Kilpatrick LTD has years of experience fighting denials and low rating assignments and may be able to assist you with your VA appeal. Call us today for a free consultation at 800-544-9144.