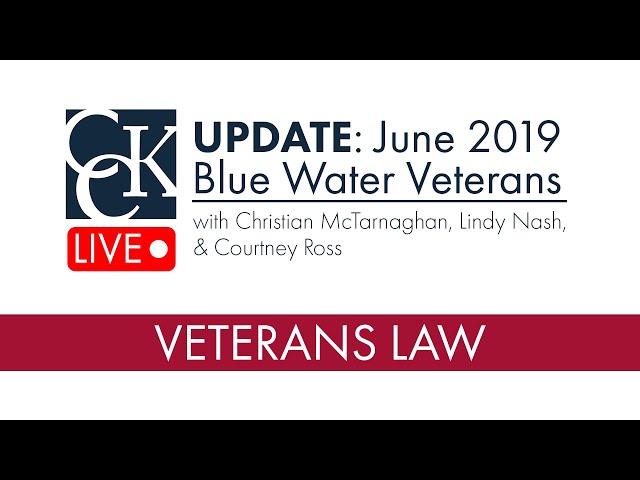 On Wednesday, June 5, 2019, the Department of Veterans Affairs (VA), via the Department of Justice (DOJ) announced they will not appeal the Federal Circuit’s decision in Procopio v. Wilkie. The Procopio decision affects “Blue Water” Navy Veterans who served within 12 nautical miles from the line of demarcation of Vietnam during the Vietnam War, making them eligible for the VA’s  Agent Orange presumption.

Zach: Good afternoon from Providence, Rhode Island.  This is Zach Stolz with Chisholm, Chisholm & Kilpatrick. Joining me for a very quick hot take today is Brad Hennings, my colleague at the firm. We are here today to talk a little bit more about the Procopio case. There is a lot of material on our website cck-law.com. Concerning the Procopio decision, it was a major decision in Veteran’s Law. It was from the en banc court, which means all of the judges from the United States Court of Appeals for the Federal Circuit. It came down about two or three months ago and a major thing has happened to Procopio decision. Brad, what is it?

Brad: So, the major thing that happened is the Federal Circuit indicated that veterans who served in the territorial seas of Vietnam, meaning the Blue Water Veterans, which includes veterans who were on the sea within 12 miles of Vietnam are now entitled to the presumption of herbicide exposure.

Zach: Right. What happened last Wednesday, that is such a major moment?

Zach: So, the Federal Circuit is one step in the judicial process below the United States Supreme Court. So the government, because it lost the Department of Veteran’s Affairs lost because it was actually saying– it was actually defending the idea that you had to be boots on the ground in Vietnam in order to be entitled to the presumption of herbicide exposure. That was the government’s argument. That argument lost and because it lost the government could appeal to the US Supreme Court, it decided last Wednesday that it will not. That means that Procopio stands. It is the law of the land and VA needs to start adjudicating cases for our Blue Water Navy Vietnam veterans. So, let’s talk a little bit more about the practical effects of this now that Procopio is behind us. It’s been won on behalf of veterans. Who’s affected by it?

Brad: So, it’s affected by any veterans who served within 12 nautical miles from the line of demarcation of Vietnam between 1962 and 1965, typically the era known as during the Vietnam War.

Zach: Right and well these cases be Nehmerized, that is to say there’s a major case having to do with Vietnam veterans called Nehmer. It is over 30 years old now but it’s a way for Vietnam veterans to be entitled to an earlier effective date if they suffer from any of the conditions caused by Agent Orange. Do we know if that case is going to apply to Procopio veterans?

Zach: How do you know if you are within 12 miles of a landmass of Vietnam?

Brad: That’s a great question. Sometimes, depending on your service, you could just tell if you got close. For example, if you docked in one of the bays of Vietnam, such as in Danang Harbor, one harbors in the Gulf of Tonkin. In addition, if you could see the land from the deck of your ship usually that mean you were around 12 miles away.

Zach: Right and there’s a list of ships too and I believe VA has a team working on establishing which people were within 12 miles. The reason for 12 miles is the Federal Circuit used international law principles to define Vietnam and 12 nautical miles is the basis of what constitutes the territorial waters of an independent country such as Vietnam. So, that’s why the 12 miles is the magical number that they came up with. I am sure that will be challenged but for right now that’s the law. It’s important to establish that you were in fact within 12 nautical miles from the line of demarcation of Vietnam one of the ways to do it perhaps is that you can see the land masses as Brad said, there is a list of ships. VA is going through great pains to determine who was within 12 miles. The number of veterans who may be affected by this is how many?

Zach: It’s a big group of veterans. It does not, however, unfortunately cover people who serve in Thailand, is that right?

Brad: That’s correct. So, there is pending legislation to provide statutory-fix for these Blue Water veterans which may even be more inclusive than the twelve-mile veterans that we’ve got now. But the Procopio decision does not affect Thailand veterans. It is in this new legislation that’s currently pending before Congress but not yet enacted that would affect Thailand veterans.

Zach: And Congress has not done really, as far as we know he’s not done really anything on this. The Department of Veterans Affairs is not necessarily actively pushing it. It would be a very expensive piece of legislation for the government; in fact, Procopio itself is going to be very expensive for the government. The figures go well over a billion dollars that at least I’ve seen. I don’t think any of us know for sure what it’s going to end up costing but that’s why the government fought so hard against these veterans being entitled to the presumption of service connection for herbicide exposure, because obviously as you can imagine 80,000 veterans are affected. How expensive that could be but nevertheless those veterans have earned it and so we are very pleased with the Procopio decision.

We are actively helping many of our clients using the Procopio decision. CCK has seen a couple of grants already based on Procopio before the department even definitively said that it would not appeal, the government started granting some of these claims. So, it is totally active right now and it’s something that the firm is looking to help out as much as we can with the clients that we have and with the clients that may come to us, about the Procopio Decision and our Navy Blue Water veterans and others who are affected by this decision. So, what’s VA going to do next Brad?

Brad: Well, that’s a great question. Right now what they’re supposed to do is start adjudicating all of these claims and as you’ve indicated we’ve seen them beginning to do that. They’re still trying to get guidance out to their field offices as to the proper way to look at these claims. It’s also possible that they could promulgate or which means make new regulations dealing with this but it’s possible that they’ll choose not to do that. We hope they’ll just do the right thing, adjudicate the claims under the new version of the law and give these veterans the benefits they deserve.

Brad: Final thoughts. If you served within 12 nautical miles from the line of demarcation of Vietnam, please make sure you file a claim or file another claim if you have any of the covered diseases with the herbicide Agent Orange presumptions. Go see your veteran’s service organization that you’re working with, the accredited attorney and agent, come CCK, get some help.

Zach: Absolutely, and don’t forget this has not affected the presumption for those who served on the landmass of Vietnam. We’re in the brown territorial waters so any Vietnam veterans who are suffering from any of the conditions that may have been caused by herbicide exposure, be they in Vietnam on the brown water areas the inland waterways of Vietnam, be they in the blue water areas covered by Procopio. Please go see our friends at DAV or other veteran’s service organizations, come CCK and if you served in Thailand come CCK because just because the Procopio decision doesn’t give the presumption of service connection to those who served in Thailand does not mean that our Thailand veterans have been forgotten. We have been very successful here on getting service connection on a direct basis, which is to say we’re proving that the veterans were exposed to herbicide even if they serve in Thailand.

So, please don’t be discouraged just because you may be a veteran not covered by a presumption. There are still many avenues to establish direct service connection for these conditions. So, those are my final thoughts on this. We told you it’d be quick. Please visit us at cck-law.com for Brad Hemmings, Zack Stoltz and for Providence Rhode Island. Have a good rest of your day. Thanks.