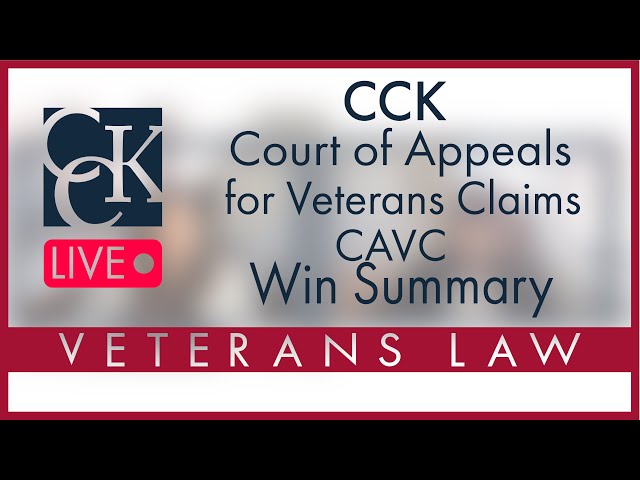 Jenna Zellmer: Hello and welcome to CCK Live. Today, we are going to be doing something a little bit different. We’re going to be doing a summary of one of our recent cases that we won in court. Joining me today is Kaitlyn Degnan, who is an attorney at CCK, and she primarily represents veterans at court. I should have introduced myself. My name is Jenna Zellmer, I’m a partner here at Chisholm Chisholm & Kilpatrick, and we are excited to talk to you today about this client’s case.

So Kaitlyn, before we talk about the details of the case, why don’t you kick us off with a little bit of background on the Court of Appeals for Veterans Claims?

Kaitlyn Degnan: Sure. The Court of Appeals for Veterans Claims, or CAVC, is a federal court located in Washington, D.C. that is dedicated just to adjudicating the appeals of claimants who have been unsuccessful in their cases before the Board.

If a veteran receives a decision from the Board, and they disagree with that decision, they have the right to file an appeal with the Court. The Court is then going to review that case and ultimately issue a decision that affirms, vacates, or remands the Board’s ruling.

Now, this is based on a closed record, right? So, we can only make arguments to the Court based on evidence that has been previously submitted before the Board. And the result that we’re generally looking for is called a remand, that means that there’s some sort of legal error in the Board’s decision and that’s why it needs to be set back, basically for the Board to make a new decision.

But in rare circumstances, the Court can also reverse the Board’s decision. But again, that’s very rare. And the skilled team here at CCK handles a wide range of cases, both before the Board and at the Court. Our knowledgeable advocates are qualified to assist veterans with appeals at any stage and follow the case all the way through the Court system.

Jenna: Right. That’s a good point and that goes back to my earlier point about how, Kaitlyn, you practice primarily at the Court, which is why we’ve tagged you to do this Court win summary. I’m sure if you’ve seen our other videos, you’ve seen a lot of our other attorneys and advocates who practice both at the Court and the VA. So, we’re excited to have you today, Kaitlyn.

Next, we’re going to break down the specifics of a recent Court case that CCK secured benefits for one of our clients. I’m going to talk a little bit about the facts and then, Kailyn, I’m going to turn it over to you to talk about the arguments.

We have a veteran as a client who served in the U.S. Army from November ’82 to August ’92, so almost a full 10 years. He was a crew member in the army and he served in Saudi Arabia. He won multiple medals and commendations for his service. After service in 2009, he underwent surgery for a service-related low back condition.

We have a lot of videos on how to get service-connected, how to get ratings, and so I would encourage you to go back and take a look at those cases. But in this case, the veteran had already obtained a service connection, and his condition had deteriorated to the point where he needed additional surgery and so he went to a VA Medical Center. And during that surgery, the physicians inserted an intervertebral cage around his spine.

Now, prior to the procedure, the veteran had signed a consent-for-treatment form which essentially says, you are acknowledging that VA is going to perform surgery and you are going to acknowledge the known risks involved in that surgery. Following surgery, the veteran had extreme back pain and just a couple of months later, he went in for an MRI, and that revealed that the intervertebral cage that had been inserted around his lumbar spine had actually broken apart and was protruding into his spine. And that was causing severe spinal canal stenosis, and that was the cause of the extreme pain. He actually had to undergo a second emergency surgery to repair the cage and remove that broken piece. And so, where does that leave us, Kaitlyn?

Kaitlyn: Because of the effects that the veteran was experiencing, he subsequently filed for disability benefits under 38 USC § 1151 for an additional back disability that he suffered as a result of the surgery performed by VA. 1151 is a statute that allows for veterans to receive compensation for a qualifying additional condition as if it were a service-connected condition if they can meet certain conditions. However, VA did deny his claim, and even after he appealed to the Board he was again denied compensation in May of 2020. And what happened is that the Board had found that what occurred during the veteran’s surgery was a reasonably foreseeable event, despite the fact that there was favorable medical evidence that the breaking of that intervertebral cage was not something that a healthcare provider would typically expect to occur.

Essentially, the Board determined that because there’s always a possibility of complications with the back surgery, this type of event is reasonably foreseeable. However, that is contradicted by VA’s own regulations, which defines an event not reasonably foreseeable as one that is not completely unforeseeable or unimaginable, but one a reasonable health care provider would not consider to be an ordinary risk.

With the help of CCK, this veteran challenged the Board’s decision by filing an appeal at the CAVC. And ultimately, the Court found that the Board had clearly erred in saying that the veteran’s additional disability, which was again, caused by that VA surgery, was reasonably foreseeable and that the Board had discounted favorable medical opinions in the process.

And so ultimately, this was one of those rare cases where the Court ruled to reverse the Board’s finding, that the event was reasonably foreseeable, and actually remanded the matter for the Board to award benefits based on the veteran’s 1151 claim. That was one of those very rare circumstances where the Court did decide to reverse and remand to direct the Board to grant benefits.

Jenna: Right. And I think that’s why we chose to highlight this one today because it’s not every day that we see the Court tell VA to award benefits. And so, it’s really exciting from our perspective. Often, we have veterans who are frustrated with the process, and ultimately, just get a remand back from the Court to the Board. And that is not, I said, just, and that’s how veterans think of it as just a remand, but that is not a bad result in most cases and that’s really what we want. But in the rare circumstances where we get a reversal, it’s just so exciting to be able to tell the veteran that. So, this is a really great Court decision.

Now, I think it’s important to highlight what would the veteran’s other options have been if they hadn’t decided to appeal to the CAVC. And we have a lot of videos about legacy versus AMA, the Appeals Modernization Act, but it’s important to know, in this context, that this was a legacy Board decision. And so, there was no option for the veteran to file a supplemental claim. If the veteran had not appealed to the CAVC, that Board decision that was clearly wrong, that we know today was wrong, would have stood up and would have been the final Board decision, the final decision on the veteran’s claim, and the only way that the veteran would have been able to continue to pursue his claim was to start all over again.

And so, that’s really why the Court is so important because, especially in legacy cases, the only way to have a second chance or get the benefits that you’re entitled to is to go to the Court and really ask the Court to step in, and either remand or reverse the Board’s decision.

Now, I would recommend that you go back and look at our videos and our blogs on the AMA. It’s a little bit different nowadays because in newer cases, there is an opportunity to submit a supplemental claim. But even in that case, a supplemental claim would require new and relevant evidence and so you do have the additional burden of developing more evidence, trying to get more evidence in your favor when we see, in this case, there was already favorable evidence and if the Board had done the right thing the first time around, they would have awarded the benefits.

That just really highlights how important the Court is. And that’s why it’s usually, especially when it’s a legal error like this, why it’s more advantageous to go to the CAVC. I think another important thing to highlight is that this really demonstrates why it’s important to hire CCK, or if you choose not to go with CCK, any knowledgeable, experienced advocate because these cases are complicated, and the fact that it went all the way up to the Court and the Court had to step in shows that sometimes VA gets that wrong.

And so, our dedicated team works really hard to ensure the best possible outcome for our clients. In this case, we developed legal arguments based on the evidence and the record and we told the veteran’s story in a way that was persuasive to the Court. I think that’s so important to make sure that you are highlighting what makes this veteran’s story sympathetic and persuasive. And so, I’m just really proud of the team here at CCK. And I’m really excited about the outcome of this case.

Kaitlyn: Precisely. Thank you so much for joining in and watching us today. Please be on the lookout for more CCK case summaries and subscribe to our channel so that you don’t miss any of them.

Jenna: Thanks, everyone. Have a great afternoon.