Getting an Earlier Effective Date for VA Disability Claims 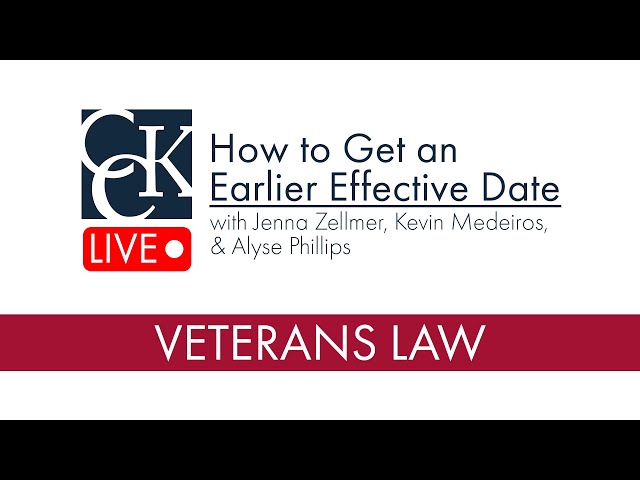 What is an Earlier Effective Date?

Sometimes, this is not the earliest possible effective date, and there are several ways to argue for an earlier effective date if you believe you are entitled.

Why an Earlier Effective Date Can Matter

Retroactive benefits are the monies VA owes to a veteran for the time that has elapsed from the veteran’s effective date to the time they are granted benefits. How Veterans Can Argue for an Earlier Effective Date

Veterans are not always given the earliest possible effective date, but there are several ways to argue for an earlier effective date if you believe you are entitled:

Clear and Unmistakable Errors (“CUEs”) for an Earlier Effective Date

A clear and unmistakable error (“CUE”) is a rare type of error made by VA that could potentially result in an earlier effective date for benefits.  CUEs are a way for a veteran to challenge a final VA decision, meaning a decision that the veteran did not appeal within the proper appeal period.

Under 38 C.F.R. 3.156(c), a veteran can receive an earlier effective date if VA denied their original claim for service connection, and then later obtained service records in a subsequent claim that substantiated the veteran’s original claim.

VA outlines specific types of service records that would qualify under the regulation.  These records can include:

Under 3.156(b), if a veteran submits new and relevant evidence within the appeal period of a decision from the Regional Office (RO), and VA does not provide notice or a determination as to whether that evidence is new and material, the veteran may be able to argue that their claim is still open with VA.

If the claim was denied previously, but then granted on records that have recently been discovered, the regulation requires that VA consider an effective date back to the time of the previously denied claim.

Here is an example:

A veteran filed for service connection for a left knee disability in November 1990 and was denied by the RO in March 1991.  The RO’s decision states that they were not able to find evidence of the veteran’s claimed in-service injury.  Veterans have one year from the date of a rating decision to submit a Notice of Disagreement (NOD).

However, in June 1991, within the one-year appeal period, this Veteran submitted service records that VA did not consider which showed in-service treatment for his left knee disability.  VA did not send him notice of a determination as to whether that evidence is considered new and material.  The Veteran did not submit a NOD within the appeal period and VA closed his claim.

In this scenario, since VA did not send him notice of a determination regarding the evidence he submitted in June 1991, the Veteran could argue that his claim is still open, and that he is entitled to an effective date for his left knee disability potentially back to his original claim in November 1990.

Again, in this scenario, VA did not address the Veteran’s new evidence, and failure to address the evidence may prevent VA from closing a Veteran’s claim, leaving it open and unadjudicated.

Claims Filed Within Year from Discharge

For veterans who file a claim for disability compensation within one year of their military discharge, VA can grant benefits back to the date of the veteran’s discharge.

However, this only applies if the claim is initially successful.  If a claim is denied and becomes final, and the veteran reopens the initial claim at a later date, the effective date does not go back to the date of discharge.

The same principle applies to dependency and indemnity compensation (DIC) claims that are received within one year of a veteran’s death.  If such a claim filed by a surviving spouse or family member is granted, the effective date is the first day of the month in which the veteran died.

There are certain conditions that VA presumes are connected to military service, meaning the veteran does not need to prove direct service connection.

Examples of this include Vietnam veterans with illnesses connected to Agent Orange exposure and Nehmer class veterans.

If VA grants presumptive service connection for your condition and receives your claim within one year of discharge, the effective date is the same as the date that the illness or injury first occurred.

If VA receives your claim more than one year after discharge, the effective date remains either when they received your claim or when your illness or injury first appears.

Our Veterans Benefits Lawyers Can Help

CCK’s veterans benefits lawyers have many years of experience in determining whether VA has awarded the correct effective date in a veteran’s claim. Our veterans’ lawyers are experienced with VA’s regulations and court case law that may help a veteran secure an earlier effective date and also secure his or her correct compensation. Contact us today for a free consultation at 800-544-9144.