Narcolepsy is a chronic sleep disorder characterized by overwhelming hypersomnolence (i.e., daytime drowsiness) and sudden attacks of sleep.  Generally speaking, individuals with this condition often find it difficult to stay awake for prolonged periods of time, regardless of the circumstances (e.g., time of day, engagement in activities, amount of sleep obtained the night before).  As a result, narcolepsy can cause significant disruptions and impairments in individuals’ daily routines.  There are two types of narcolepsy:

Signs and symptoms of narcolepsy tend to worsen within the first few years, stabilize, and then continue for life.  The most common symptoms include the following:

Importantly, people with this condition may have other sleep disorders, such as sleep apnea and restless leg syndrome.  Although the exact cause of narcolepsy is unknown, research suggests that individuals with type 1 narcolepsy have low levels of hypocretin (i.e., a neurochemical in the brain that helps regulate wakefulness and REM sleep).  It is also likely that genetics play a role in the development of narcolepsy; however, the risk of a parent passing this disorder to a child is highly unlikely.

Formal diagnosis requires staying overnight at a sleep center to undergo a sleep analysis completed by sleep specialists.  Unfortunately, there is no cure for narcolepsy; however, medications and lifestyle changes can help with symptom management.  Medications for narcolepsy include the following:

Secondary service connection may be warranted when a veteran’s already service-connected condition (i.e., narcolepsy) causes or aggravates an additional condition.  Some common secondary conditions that result from narcolepsy include mental health conditions such as anxiety and depression.  If a veteran is service-connected for narcolepsy and later develops anxiety or depression, it may be beneficial to speak with a mental health provider and do research to determine if there is any link between the two.

It is important to note that obesity can also be used as an intermediary step in establishing service connection for a secondary condition.  Current literature shows that individuals with narcolepsy often experience sudden weight gain months after being diagnosed.  The specific cause of such weight gain remains unknown, it is hypothesized that people with narcolepsy burn fewer calories due to a lower metabolism (less active while sleeping).

Veterans can also make a similar argument when it comes to medications that cause weight gain.  For example, a veteran is taking a medication (see above) for narcolepsy and one of the side effects of the medication is weight gain.  The veteran can then argue that their weight gain, which is linked to their service-connected narcolepsy, caused hypertension, thereby establishing service connection in that way.  On the other hand, if the medication causes hypertension or gastrointestinal problems directly, secondary service connection can be established in that way as well.

Importantly, when continuous medication is shown necessary for the control of epilepsy, the minimum evaluation will be 10 percent; however, this rating will not be combined with any other rating for epilepsy.  Furthermore, if the veteran experiences both major and minor seizures, VA adjudicators should rate the predominating type. 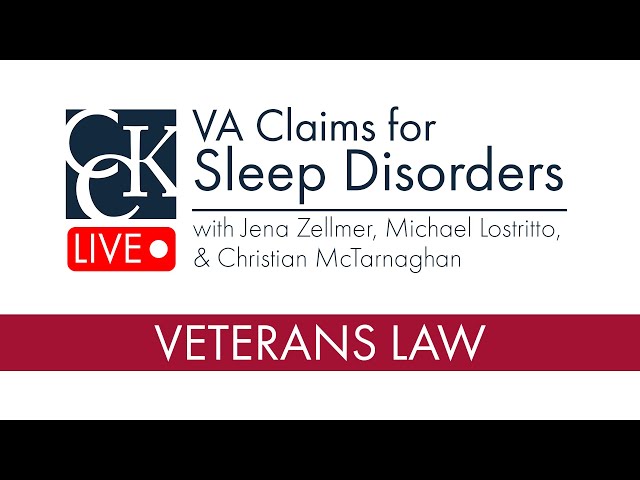 A compensation and pension (C&P) exam is a medical examination of a veteran’s disability that is performed by a VA healthcare provider, or a VA contracted provider.  VA uses C&P exams to gather more evidence on a veteran’s claimed condition before issuing a decision and assigning a rating.  Most commonly, C&P exams are used to (1) confirm or deny service connection, and/or (2) establish the severity of a veteran’s disability.  When veterans file claims for service connection for narcolepsy, they will likely be scheduled for a C&P exam; however, veterans should also plan to undergo a sleep study.

At the C&P exam, examiners will review the veteran’s entire claims file, which contains previously submitted evidence and medical treatment records.  The exam itself usually only lasts about 15-20 minutes but can range anywhere from five minutes to several hours.  During this time, the examiner will ask questions about the veteran’s condition and try to determine whether it is caused or aggravated by active duty military service.  After the exam is completed, the examiner will write up the results.  Veterans should request a copy of C&P exam results to ensure that the information included is thorough and accurate.  Furthermore, if the examiner finds that the veteran’s narcolepsy is “less likely than not” due to their time in service, veterans can see the rationale and argue against the examiner’s conclusion.

Getting a 100 percent schedular disability rating for narcolepsy can be very difficult to do.  Total disability based on individual unemployability (TDIU) provides an alternative avenue for receiving a 100 percent total rating.  If you are unable to secure and maintain substantially gainful employment as a result of your service-connected narcolepsy, you may be entitled to TDIU.