Epilepsy is a central nervous system (neurological) disorder in which brain activity becomes abnormal, causing seizures or periods of unusual behavior, sensations, and sometimes loss of awareness.  Usually, at least two unprovoked seizures are required for an epilepsy diagnosis.  Epilepsy has no identifiable cause in about half of those with the condition.  In the other half, the condition may be due to various factors, such as genetic influence, head trauma, infectious diseases, etc.  Epilepsy and seizure conditions can also be related to a veteran’s military service.

Symptoms of Epilepsy and Seizures

Seizure symptoms can vary widely and may include the following:

Symptoms vary depending on the type of seizure; however, a person with epilepsy will tend to have the same type of seizure each time.  In other words, the symptoms will be similar from episode to episode.

Prevalence of Epilepsy and Seizure Conditions in Veterans

According to the Center for Disease Control and Prevention, about 3 million adults ages 18 and older had active epilepsy in 2015.  The Veterans Health Administration (VHA) estimated that the prevalence of veterans with epilepsy under treatment at VA medical facilities was 13.8 per 1,000 in that same year.  The VHA data show that about 13 percent of veterans with seizures were less than 45 years old, 39 percent were between 45-65 years old, and about 8 percent were female.

To receive VA disability compensation for epilepsy and seizure conditions, a doctor must have witnessed the veteran have a seizure and performed neurological testing.  If a doctor has not seen a seizure, the veteran cannot be service connected for epilepsy.  Furthermore, it is important for the doctor to document the frequency and severity of the veteran’s seizures.  After a diagnosis is made, the veteran must show evidence of an in-service event and provide a medical nexus linking their diagnosis to the in-service event.

A major seizure is classified as one that affects the entire brain.  Typically, major seizures involve a loss of consciousness and uncontrollable shaking.  Minor seizures, on the other hand, affect only portions of the brain.  These seizures cause brief interruptions in conscious control with symptoms like mumbling, rocking, slight twitching of the muscles, or falling down.

Types of Epilepsy and Seizure Conditions

There are many types of epilepsy and seizure conditions that fall under the “major” and “minor” classifications.  Examples include, but are not limited to, the following:

Although each type of epilepsy or seizure condition has its own diagnostic code (DC), they are all still evaluated under the general rating formula outlined above.

Epilepsy and seizure conditions can be extremely debilitating and as result, interfere with daily life.  For example, a veteran’s service-connected seizure condition may prevent them from working.  If this is the case, they may be eligible for total disability based on individual unemployability (TDIU) – a disability benefit that allows for veterans to be compensated at VA’s 100 percent disability rate, even if their combined schedular rating does not equal 100 percent.  Veterans who are unable to secure and maintain substantially gainful employment should explore this option in order to potentially maximize their benefits.

Open-air burn pits are large areas of land that were used as a means of waste disposal on American bases in Iraq, Afghanistan, and Djibouti after September 11, 2001.  The practice was effective in reducing large quantities of waste, but the pits emitted plumes of toxic smoke.  The following materials have been linked to military burn pits:

As these wastes were burned, harmful chemicals and toxic fumes were released into the atmosphere.  As such, many veterans of Operation Enduring Freedom (OEF) and Operation Iraqi Freedom (OIF) have developed health conditions from hazardous exposures caused by the burn pits.

What Conditions Have Been Linked to Burn Pit Exposure?

Burning hazardous materials and chemicals in open-air pits emits toxic substances and carcinogens that can cause a host of diseases, some severe and even deadly.

Epilepsy has been linked to burn pit exposure.  Many veterans who served in areas affected by burn pits have gone on to experience seizures and develop epilepsy after their service.

In addition to epilepsy, the following symptoms or conditions have been linked to military burn pit exposure:

This list is not exhaustive, so veterans may suffer from other conditions after exposure to burn pits.   If you developed epilepsy, or any of the above listed conditions, as a result of burn pit exposure during your military service, you may be eligible for VA disability benefits.

Does VA Have a Presumption of Exposure for Burn Pits?

At this time, there is little conclusive research on the long-term health impacts of burn pits.  One of the toxins released by burn pits, called TCDD, was also one of the major toxins in Agent Orange.

VA recently announced that as of August 2, 2021, it will begin processing disability claims for asthma, rhinitis, and sinusitis on a presumptive basis based on presumed particulate matter exposures.  Veterans will only be eligible for this presumption if they meet certain criteria, including service in Southwest Asia and other specified areas and manifestation of asthma, rhinitis, or sinusitis within 10 years of a qualifying period of military service.  Many veterans exposed to burn pits during their service and developed one of these three conditions may be able to seek service connection under this new presumption.

However, VA does not have a consistent approach to deciding these claims, so lay evidence from veterans is key to winning burn pits claims.  This may include statements from the veteran or their fellow servicemembers to prove exposure.

Any of these bills, if passed, would offer much needed relief to veterans suffering the toxic effects of burn pit exposure. 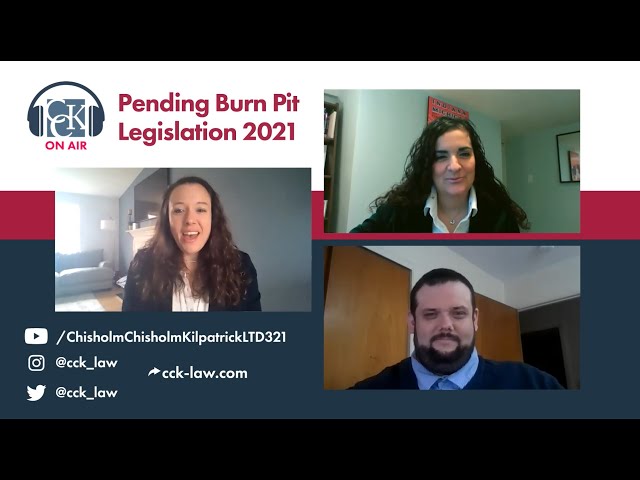 Getting Assistance with Epilepsy or Seizure VA Disability Benefits

Veterans who were exposed to military burn pits or experienced a traumatic brain injury and developed epilepsy or a seizure disorder as a result of their service may be eligible for VA disability benefits.  However, these claims can be difficult to win and cause veterans much frustration.  If you need help with your appeal for VA disability benefits, the VA disability lawyers at Chisholm, Chisholm & Kilpatrick may be able to help you.  For a free case evaluation, call our office.