Back Range of Motion for VA Benefits Explained Relationship Between Veterans and Back Pain

Veterans frequently experience back pain following their time in service.  Back conditions, depending on their severity, can greatly impact a veteran’s ability to perform activities of daily living or carry out work-related responsibilities. One way of measuring the limitations brought on by back pain is to measure the range of motion  If veterans can establish that their back pain is a result of their military service, they may be eligible to receive VA disability benefits in the form of monthly compensation and VA healthcare.

According to VA’s Annual Benefits Report for Fiscal Year 2018, back conditions are the sixth most common conditions amongst veterans.  Specifically, Gulf War veterans are most affected by back conditions.  This pattern could be due to how long the Gulf War spans and consequently, the large number of veterans within this group.  Other contributing factors may include the physical training, heavy gear, and lack of proper shoes in service.

How VA Rates Back Pain and Back Conditions: Range of Motion

In most cases, VA uses the General Rating Formula for Diseases and Injuries of the Spine under 38 CFR § 4.71a to evaluate back conditions, including back pain.  This general rating formula is based primarily on range of motion, or the measurement of the amount of movement around a specific joint or body part.  The range of motion measurement typically encompasses the range of flexion (i.e., bending) and extension (i.e., straightening) as well.  VA generally rates back conditions/pain as follows:

As mentioned above, VA’s rating system for back pain/conditions is largely based on a veteran’s range of motion.  This rating process also stems from VA’s painful motion rule outlined under 38 CFR § 4.59.  Specifically, the regulation states, “it is the intention to recognize actually painful, unstable, or mal-aligned joints, due to healed injury, as entitled to at least the minimum compensable rating for the joint.”  That is, VA will compensate veterans who experience pain on motion, which is often, but not always, represented by the range of motion.  The regulation also stipulates that the joints involved should be tested for pain on both active and passive motion, in weight-bearing and non-weight-bearing and, if possible, with the range of the opposite undamaged joint. 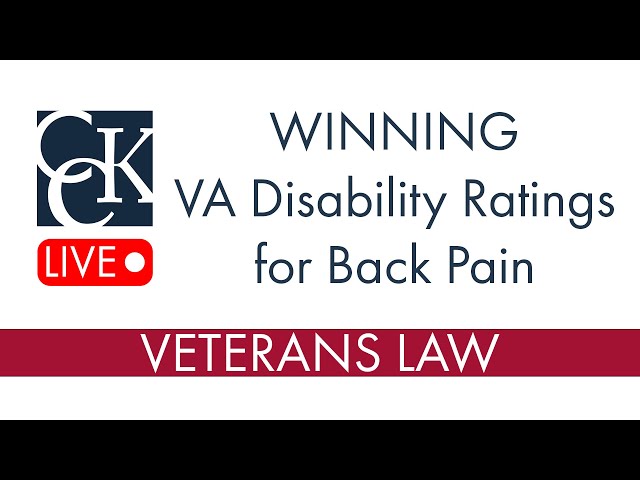 Other Considerations for Back Pain and Conditions

Although range of motion is the main factor considered when rating, there are other relevant factors that should be considered as well, such as flare-ups.  Generally speaking, flare-ups are defined as a sudden and temporary increase in symptoms.  Flare-ups are typically recurrent, but unpredictable and arise without warning.  The abrupt escalation in symptoms, including pain and loss of mobility, can sometimes result in complete incapacitation.

If veterans are service-connected for back conditions, the presence of flare-ups could impact their disability ratings.  Specifically, a higher rating may be awarded when there is additional loss or limitation of motion due to pain during flare-ups.  For example, a veteran is granted service connection for a back condition and receives a 10 percent disability rating.  On most days, the veteran is unable to bend forward more than 60 degrees.  However, when experiencing a flare-up, the veteran is unable to bend more than 30 degrees.  Therefore, during the flare-up, the veteran’s back condition becomes much more disabling than 10 percent.  As such, VA should assign a disability rating in accordance with this additional loss.

Furthermore, VA should consider the functional loss caused by the veteran’s back condition, as evidenced by pain during motion.  For example, a veteran might be able to bend forward 85 degrees but starts to experience pain at 55 degrees.  In this case, the veteran should receive a disability rating that is consistent with both the range of motion measurements and the functional limitations caused by their back pain.