Glaucoma is a disease that damages the optic nerves of the eye.  It can occur when fluid builds up in the front part of the eye, causing pressure and damage.  There are two main forms of glaucoma:

An eye exam will usually be necessary to diagnose glaucoma.  This exam can check eye pressure, as well as examine the optic nerve for damage.  As many people with glaucoma may not display symptoms, regular screenings are important so as to catch any signs of glaucoma early.  Additionally, when a person does display symptoms, they may not be recognized right away as signs of glaucoma.  This can often lead glaucoma to be regularly misdiagnosed.  Attending regular eye exams with an optometrist is then crucial to ensure that glaucoma is caught early. 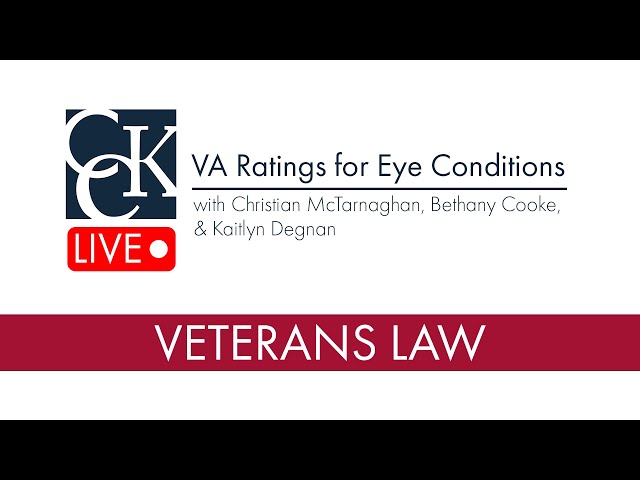 To support the veteran’s claim for service connection, the veteran may submit lay evidence.  Lay evidence, or lay statements, can be written by the veteran, their friends, family, coworkers, or anyone who knows the veteran and can speak to their condition.  Importantly, lay evidence may also be submitted by fellow service members.

Once a claim for glaucoma has been filed, VA may request a Compensation and Pension exam, or C&P exam.  This exam will usually be performed by a VA physician or VA contracted physician.  As glaucoma is a condition affecting the eyes, the physician may be an optometrist.  They may physically examine the veteran’s eyes or ask questions regarding their military service or symptoms of their glaucoma.

The veteran may also use a DBQ, or Disability Benefits Questionnaire, to bolster their claim.  A Disability Benefits Questionnaire is a form created by VA as a way for veterans to address important aspects of their condition, such as symptoms, severity, possible causes, and relation to other disabilities.  The veteran may also have their private doctor fill out a DBQ for them.  This can be helpful, as the veteran’s regularly treating optometrist can submit one that speaks to the details of their condition.

How Does VA Rate Glaucoma?

Glaucoma is rated under  38 CFR § 4.79, Schedule of Ratings – Eye.  There are generally two diagnostic codes used for glaucoma:

If the veteran requires continuous medication for their glaucoma, then VA will assign a minimum rating of 10 percent.  Higher ratings may be assigned based on the level of visual impairment or eye disease.  Generally, VA will evaluate based on three criteria: central visual acuity, the visual field, and muscle function.

In order to qualify for service connection for glaucoma, the veteran will likely need to have significant vision loss or damage to their central or peripheral vision. While many veterans who were exposed to toxins during their service have gone on to develop glaucoma since their military service, VA does not acknowledge presumptive service connection for military burn pit exposure, as it does for other types of exposure.

Research continues to be done to link burn pit exposure to a variety of different conditions, such as cancers and respiratory conditions.  While further research will need to be conducted, it has indicated that one of the known chemical compounds which was found in Agent Orange, called TCDD, was also released by burn pits.  However, unlike some conditions caused by Agent Orange exposure, VA does not acknowledge presumptive service connection for any condition linked to burn pit exposure.

However, if you received a denial in your claim for glaucoma, it does not have to be the end of the road.  Our experienced VA disability attorneys may be able to help you secure VA disability benefits for your glaucoma.  Contact our office today for a free consultation at 800-544-9144.