Board of Veterans’ Appeals: Backlog Transparency

Breaking Down the Backlog at the Board of Veterans’ Appeals

When a veteran receives a denial on a claim of disability benefits, they have the right to appeal the decision. If a veteran chooses to file an appeal, their appeal will be processed through one of two appeal systems, depending on the date the appeal was submitted.

Historically, veterans’ appeals were processed through the Legacy appeals system. In August of 2017, the Appeals Modernization Act (AMA) was signed into law. Prior to the law’s full implementation in February of 2019, the Rapid Appeals Modernization Program (RAMP) served as the pilot program for the AMA.

Appeals Modernization Act at the Board of Veterans’ Appeals

If you choose to appeal an initial decision by VA, you have three options in the new appeals system under the AMA. You can request a higher-level review, submit a supplemental claim that includes new and relevant evidence, or appeal directly to the Board of Veterans’ Appeals (BVA).

If you choose the third option, you must submit a Decision Review Request: Board Appeal, also called a Notice of Disagreement (NOD); this is a formal statement informing the Department of Veterans Affairs (VA) that you disagree with the decision issued on your disability claim. You must be sure to choose one of three dockets listed on the NOD: direct review docket, evidence docket, or hearing docket.

The hearing docket provides either an in-person hearing in Washington, D.C. or a videoconference hearing with a Veterans Law Judge. A claimant can submit new evidence with their NOD, at their hearing or in the 90 days following the hearing. Though processing time may vary, each of these dockets will ultimately lead to a BVA decision. 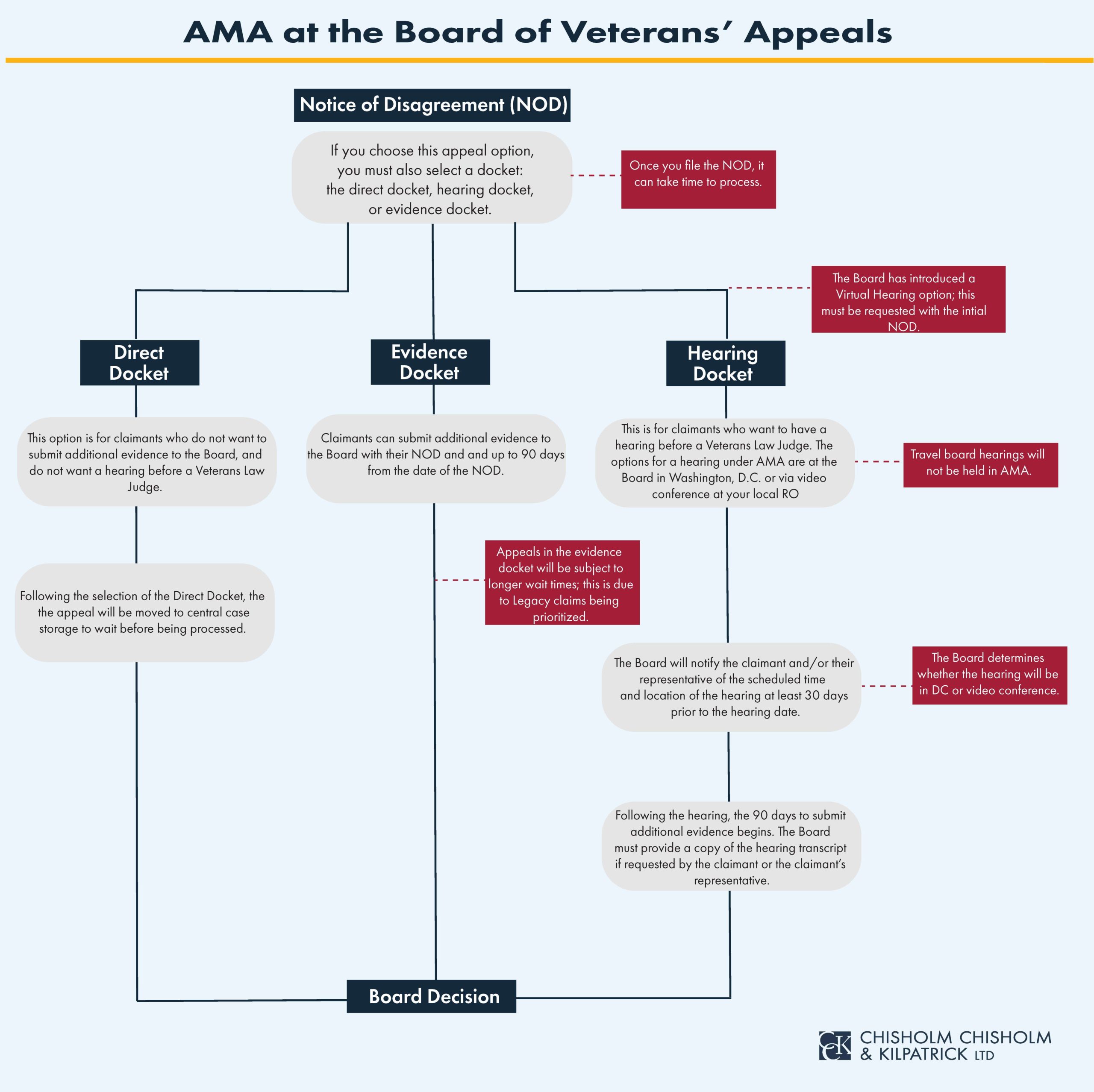 Legacy Cases at the Board of Veterans’ Appeals

The first step in the Legacy Appeals system is to file your appeal, using the VA-9 Form, with your VA Regional Office (RO) within 60 days of the date on the letter accompanying the Statement of the Case (SOC). After receiving your VA-9 Form, staff at the Regional Office should follow up on any submitted evidence and will either make a new decision or fill out the necessary certification paperwork to move your case to the Board of Veterans’ Appeals (BVA).

You will be notified when the BVA receives your appeal. Next, administrative employees at the BVA will manually process your appeal, in-taking your appeal and assigning a docket number.

If you requested a hearing, your appeal will be moved to the appropriate hearing queue based on which type you requested: video conference, in-person, or travel. Video conference hearings take place at your RO and are conducted via videoconference with a Veterans Law Judge in Washington, D.C. In-person hearings take place at the BVA’s Central Office in Washington, D.C. Travel hearings occur when the BVA makes their rounds to hold local hearings at Regional Offices around the country. The number of times they travel to a RO within a year varies depending on the location.

BVA will receive a hearing transcription anywhere from 2 to 6 months following your hearing, under typical circumstances, and your appeal will be moved to Central Case Storage to await assignment to a Veterans Law Judge.

If you opted not to have a hearing, your appeal would skip the hearing queue and go directly to Central Case Storage. When your docket number is within the range BVA is working on, a Veterans Law Judge will assign it to a staff attorney to review and draft a decision or make edits and revisions as they see fit. Finally, a Veterans Law Judge will sign the decision on behalf of the BVA, and you will be notified that your appeal was granted, denied, or remanded. The number of appeals filed with the Board of Veterans’ Appeals (BVA) under AMA during the 2019 Fiscal Year (FY), from October 1 through September 30, is much lower than the number of AMA appeals filed with the BVA during 2020. This is because the AMA system only came into effect in February 2019, so most appeals of RO decisions generated prior to that date were filed according to the requirements of the Legacy system, which did not allow appeals of Rating Decisions directly to the Board of Veterans’ Appeals.

However, some appeals were filed through RAMP, which served as the pilot program for the AMA System. The number of appeals filed through AMA in 2020 thus far is already more than double the amount of AMA appeals from 2019.

The number of AMA appeals for the 2020 Fiscal Year to Date (FYTD) is higher in every category when compared to the 2019 appeal numbers; this means that a greater number of appeals are being processed through each of the three AMA dockets (i.e., direct review, evidence, and hearing dockets) this year. However, the number of total AMA hearings held in 2019 is merely a fraction of the tens of thousands of appeals filed to the BVA.

For both the AMA and Legacy systems, the data shows that remands were the most issued decisions last year, followed closely by grants. After grants came denials, then grants with remand (in the case of AMA appeals).

It is important to note that in the Legacy system, the number of days to completion has been higher thus far in 2020 when compared to 2019. This means that the number of days from when an appeal is received by the BVA to when the BVA issues a decision has increased.

Similarly, the average number of days needed by the BVA to process claims in the AMA system has also gone up. From the initial BVA intake of an appeal to its completion, cases in the direct review, evidence, and hearing dockets are overall being processed more slowly in 2020 than in 2019.

In the Legacy system, so far this year the average number of days it takes for an original appeal to go from RO certification to a BVA decision is significantly higher than that of a remand that has returned to the BVA. This is likely due, in part, to the fact the remands returning to the BVA are supposed to be given priority over appeals coming before the BVA for the first time.

As of July 29, 2019, remands from the BVA that had been sent back to the agency of original jurisdiction (i.e., typically the RO) for further development have been pending for almost 2,500 days since the filing of the initial NOD; furthermore, remands that have been pending since the filing of the initial NOD which are now back at the BVA for review have an even longer wait time. On average, the BVA is able to process remands nearly five times faster than Regional Offices.