VA’s Benefit of the Doubt Doctrine VA’s Benefit of the Doubt doctrine is a statutory and regulatory example of the non-adversarial nature of the VA disability claims process. When it comes to a balance of evidence, the tie is supposed to go the veteran. How does it work in practice?

Explaining the Benefit of the Doubt Doctrine

The Benefit of the Doubt doctrine is outlined in 38 USC § 5107(b) and 38 CFR § 3.102.  Specifically, it states, “by reasonable doubt is meant one which exists because of an approximate balance of positive and negative evidence which does not satisfactorily prove or disprove the claim.”  Essentially, this means that if there is an equal balance of positive and negative evidence of a veteran’s entitlement to a benefit, VA is supposed to rule in favor of the veteran.  This is further established in 38 CFR § 4.3, which states, “When after careful consideration of all procurable and assembled data, a reasonable doubt arises regarding the degree of disability such doubt will be resolved in favor of the claimant.”

Importantly, veterans are not required to cite these statutes and regulations when making arguments to support their claims.  Instead, this is the operative standard of proof VA should be applying in every case. 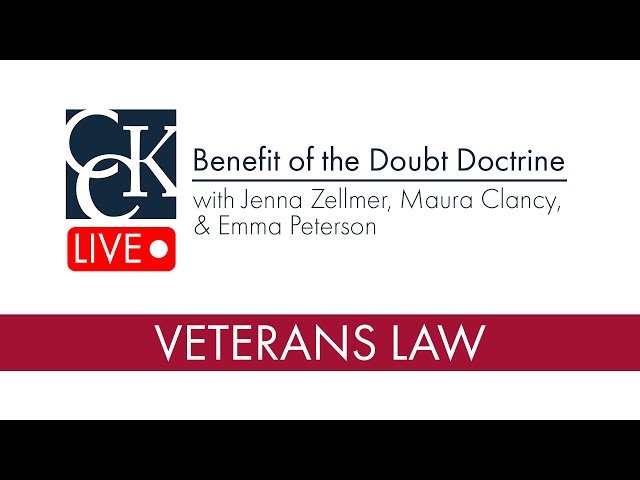 VA has a certain evidentiary standard, or “standard of proof,” when it looks at veterans’ claims for disability benefits.  The “at least as likely as not” language addresses this standard for proving service connection.  Unlike the standard of proof in criminal cases, veterans do not have to show “beyond a reasonable doubt” that their disability was caused by service.  Instead, veterans must show that it is “at least as likely as not” caused by service.  VA’s evidentiary standard is a much less stringent burden for veterans and is part of the non-adversarial nature of the VA disability claims process.  However, if a veteran receives an unfavorable nexus opinion from a Compensation & Pension examiner, it will likely say “it is less likely than not” that the veteran’s condition is due to service.  In this case, it means that VA found that it is less than 50 percent likely that the veteran’s condition is linked to their time in service.  Therefore, language is very important as it is what VA looks for when adjudicating claims for service connection.

How VA Applies the Benefit of the Doubt Doctrine

Problems with the Benefit of the Doubt Doctrine

This rule also only applies if there is a balance of the evidence. If there is more negative evidence in the file than positive evidence, then the Benefit of the Doubt does not apply. However, submitting lay statements, either from the veteran or friends or family members, can be helpful in tipping the scales in terms of the balance of the evidence. It can help if veterans are aware what is in their claims file so they can see if they need to submit more positive evidence to help put the Benefit of the Doubt doctrine into play in their case.

Benefit of the Doubt and Increased Rating Claims

The Benefit of the Doubt doctrine also applies to increased rating claims as outlined in 38 CFR § 4.7.  Specifically, whenever there is any doubt as to which evaluation should be assigned, VA must pick the higher of the two that can be assigned.  For example, a veteran currently has a 30 percent disability rating for PTSD.  A recent examination shows that the veteran meets some of the rating criteria for a 30 percent rating along with some of the rating criteria for the 50 percent rating.  VA should award the 50 percent as the veteran’s PTSD more closely approximates that rating.