CCK LIVE: The “Non-Adversarial” Nature of the VA Claims Process The VA disability claims process is intended to be veteran-friendly and non-adversarial. We took a look at VA’s regulations that are favorable to veterans and how VA implements them in practice. 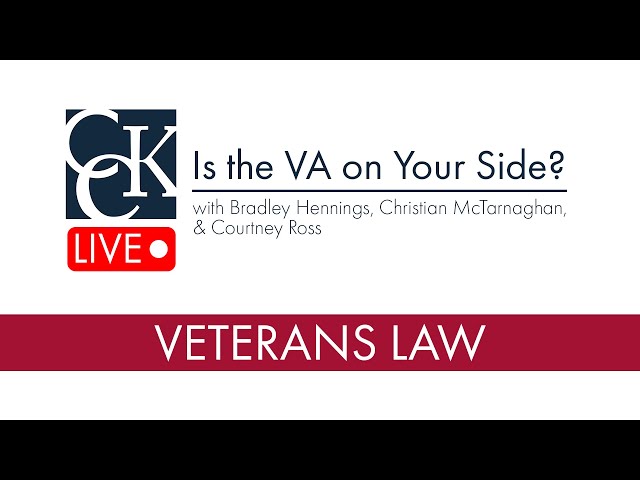 VA as a Non-Adversarial System

Most of the traditional legal systems seen in the United States are considered adversarial. Adversarial means there are two opposing parties who present two sides of an issue in front of an objective third party, typically a jury or a judge. The objective third party makes the determinations in a case.

However, the VA disability claims system takes a non-adversarial approach to veterans’ claims. Non-adversarial means that VA works with veterans to develop and substantiate their claim for benefits, instead of working against the veteran to disprove their claim. VA takes this approach because its mission is to help and care for veterans who served our country.

The VA claims process does become adversarial when it reaches the Court of Appeals for Veterans Claims. From the time that a veteran files a claim at the their local Regional Office all the way up to the Board of Veterans’ Appeals, the VA system is non-adversarial. However, if a veteran appeals a Board of Veterans’ Appeals decision to the Court of Appeals for Veterans Claims, the system changes into one that is adversarial. At this stage of the process, the veteran or their representative will argue against VA’s position in the case.

A statute of limitations is a time limit on the ability to bring legal action. VA does not have a statute of limitations on when a veteran can file a claim for benefits. However, VA decisions do become final after the deadline to appeal that decision has passed. VA decisions at each step of the VA disability claims process have different appeal deadlines. If a VA decision does become final, a veteran can reopen their claim with new and material evidence.

If a veteran misses an appeal deadline or does not otherwise appeal a VA decision, they can reopen their claim for benefits by submitting new and material evidence. New evidence is evidence that VA did not have when it previously adjudicated the veteran’s claim, and material evidence is evidence that is relevant to the reason(s) that the veteran’s claim was previously denied.

In this way, VA decisions are not truly final as a veteran can reopen their claim if they submit evidence that meets the new and material standard.

VA’s duty to assist is a part of the non-adversarial nature of the VA system. The duty to assist requires VA to make reasonable efforts to gather information and evidence to help a veteran in the development and substantiation of his or her claim. This typically means VA has a duty to obtain the veteran’s service personnel and medical records, VA medical records, and even private medical records. VA will gather records of which it is notified to be in existence, meaning VA will need to be told, to a certain extent, where and what the records are that they should obtain.

What Does “Reasonable Effort” Mean?

As mentioned, VA has an obligation to make a reasonable effort to obtain documentation for a veteran’s claim in order to fulfill its duty to assist. For private medical records, this reasonable effort usually requires VA to make at least two attempts to obtain the private records, unless it is clear after the first attempt that the records do not exist or it is otherwise not possible for VA to obtain them. If VA is not able to obtain the records after two attempts, VA is required to notify the veteran that their attempts were unsuccessful and request that the veteran submit the records.

This falls under the Veterans Claims Assistance Act of 2000.

Compensation and pension (C&P) exams are medical examinations that VA orders for veterans in order to assess their disability for their VA claim. C&P exams are part of VA’s duty to assist veterans in their claims, however, VA is not always obligated to provide an exam. In order for VA to order an exam, a veteran must show certain elements of their claim:

If VA does not believe that a veteran’s case warrants an exam, a veteran can request an exam and argue that they do in fact meet the threshold.

Board of Veterans’ Appeals Hearings

If a veteran appeals to the Board of Veterans’ Appeals, they can request a hearing before a Veterans Law Judge. In these hearings, the Veterans Law Judge is obligated to explain to the veteran the issues that are involved in their case and what evidence the veteran could submit to help their claim.

VA’s Benefit of the Doubt Doctrine

VA’s Benefits of the Doubt Doctrine is also a part of the non-adversarial nature of the VA disability claims process. The Benefit of the Doubt Doctrine means that if there is a proximate balance between positive and negative evidence in a veteran’s claim, VA is supposed to decide in favor of the veteran. This balance of the evidence is called “equipoise.”

VA uses the standard of “at least as likely as not” when deciding a veteran’s claim. What this means, for example, is if a veteran files a claim for service connection for depression and VA finds that there is at least a 50% chance that his depression was caused by service, they are supposed to grant the veteran service connection.

On the other side of this is, if the veteran’s depression is less than 50% likely to have been caused by service, VA will say that it is “less likely than not” caused by the veteran’s service, and they will deny service connection.

When VA makes a favorable finding in a veteran’s case, it is then bound by that favorable finding. This generally means that VA cannot reverse its position if it has made a finding that is favorable to the veteran. For example, if a veteran is seeking service connection for a condition due to herbicide exposure in Vietnam and VA concedes in a decision that the veteran was stationed in Vietnam, it will be bound by that finding in future decisions of that claim.

The Attitude of Rating Officers Regulation