“Gulf War Illness” and “Gulf War Syndrome” refer to some of the conditions veterans have developed as a result of their service in the Persian Gulf War. Our panel discussed how to navigate the complex area of Gulf War claims and some common mistakes VA makes when adjudicating these claims. 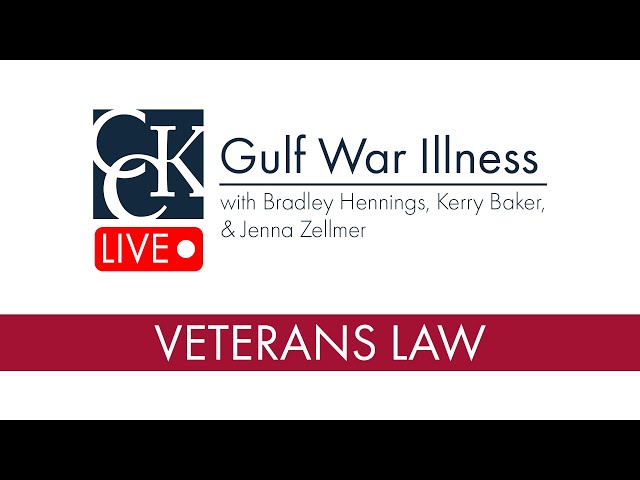 What Is the Persian Gulf War?

VA considers service in the following countries and locations as Gulf War service:

What Were Veterans Exposed to?

In the Persian Gulf War, veterans were exposed to a number of hazardous toxins and harmful environmental conditions. Not all of the exposures are known at this time, but it is clear that service members were exposed to smoke from oil well fires, nerve gas release, insecticides and pesticides including flea collars, various vaccinations, and high levels of particulate matter. veterans to obtain service connection for conditions they develop due to their service in the Gulf War.

The presumption holds that if a veteran served in the locations listed above in the section  “What Is the Persian Gulf War?” between August 2, 1990 and December 31, 2026, and they experience certain signs or symptoms, VA will presume that the veteran’s Gulf War service caused their condition.

A Medically Unexplained Chronic Multisymptom Illness (MUCMI) is a diagnosed condition without a conclusive pathophysiology or etiology that is characterized by clusters of symptoms. VA lists Chronic Fatigue Syndrome (CFS), Fibromyalgia, and functional gastrointestinal disorders as examples of MUCMIs.

Veterans should keep in mind that this is not an exhaustive list.

In June 2017, the U.S. Government Accountability Office (GAO) released a report which found that VA denies more than 80% of veterans’ disability claims related to the Gulf War. The report also found that Gulf War Illness claims have longer wait times, and that there is a poor understanding of Gulf War Illness among VA staff. Presumptions are meant to ease the process of service connection, however, the report found that the approval rate for Gulf War Illness claims is three times lower than all other medical issues. VA employees and examiners do not properly understand Gulf War illnesses, resulting in frequent denials of Gulf War claims.

While the presumptive period for Persian Gulf War claims does partly overlap with the time period in which burn pits were used, these two types of claims are different. First of all, there is no presumption for burn pit-related illnesses as there is for illnesses due to Gulf War service. This means that veterans claiming service connection for a condition due to burn pits would pursue direct service connection for their condition. Second, burn pits were used in Afghanistan, which is not one of the included locations in VA’s Gulf War presumption for MUCMIs and undiagnosed illnesses.

Third, the time periods differ for burn pits and Gulf War claims. The Gulf War presumption covers the time period from August 2, 1990 to December 31, 2026. However, burn pits were not used in Iraq and Afghanistan until after September 11, 2001, mostly only impacting OIF/OEF veterans.

The VA Airborne Hazards and Open Burn Pit Registry is a tool for the Veterans Health Administration to gather data on veterans who served in the Southwest Asia theater of operations and their health conditions. The registry does not impact a veteran’s claim for benefits for a condition due to their Gulf War service. Signing up for the registry does allow veterans to receive a Gulf War Examination.

As part of the GAO report, it was found that VA does not require Compensation and Pension (C&P) examiners to complete training on the topic of Gulf War illnesses. This results in examiners not properly assessing a veteran’s condition when it comes to service connection as due to their Gulf War service. If a veteran’s C&P examiner seems to lack understanding of these types of claims and conditions, veterans should consider submitting lay evidence to support their claim. Lay evidence can be submitted by friends and family members who have seen the progression and development of the veteran’s condition, or fellow service members who witnessed the veteran’s condition.