The Department of Veterans Affairs (VA) denies more than 80 percent of veterans’ disability claims for Gulf War Illness, according to a recent Government Accountability Office report.That rate of approval is three times lower than all other types of claims, despite the existing presumption for Gulf War veterans. The report also found longer wait times for Gulf War Illness claims, poor understanding of Gulf War Illness among VA staff, and serious shortfalls in research efforts.

The VA attributes these issues to the complexity of Gulf War Illness, which is an umbrella term for certain medical issues thought to be caused by toxic exposure in Southwest Asia. But staff confusion is not helped by the fact that the VA does not require training for its medical examiners on Gulf War Illness.

What is Gulf War Illness?

Gulf War Illness, as mentioned above, is an umbrella term. Gulf War Illness refers to a cluster of different conditions affecting a significant number of veterans who served in Southwest Asia over the past 27 years.

According to the VA, more than 1.1 million U.S. servicemembers have been deployed to Southwest Asia since the start of the Persian Gulf War in 1990. As early as 1991, Gulf War service members and veterans started reporting an unusual collection of symptoms after their return from service.

The exact cause of the symptoms was unknown, but the Department of Defense (DoD) noted that troops might have been exposed to a variety of hazardous substances – including pesticides, fumes from burning oil wells, and even depleted uranium – all of which could be linked to their medical conditions.

The symptoms veterans were describing did not fit easily into recognized categories of disease. This presented a problem for health care providers as well as VA staff evaluating Gulf War-related disability claims. At the time, VA estimated that a significant percentage of Gulf War veterans – about 25 percent – were affected, so in 1994, they initiated research.

VA avoids the use the term “Gulf War Illness” because symptoms vary widely, but it is often referred to as such by VA clinicians and medical literature. For this reason, we will use the term Gulf War Illness to refer to claims based on any of the three clusters of symptoms. In response to increasing reports of illness from Gulf War veterans, Congress passed legislation in 1994 that established a presumption for Gulf War veterans with an undiagnosed illness, meaning these veterans would not have to prove to VA that their illnesses were caused by military service.

Presumptions are intended to ease the process of establishing service connection, a requirement for receiving VA disability compensation. But current approval rates for Gulf War Illness claims do not reflect this intention. 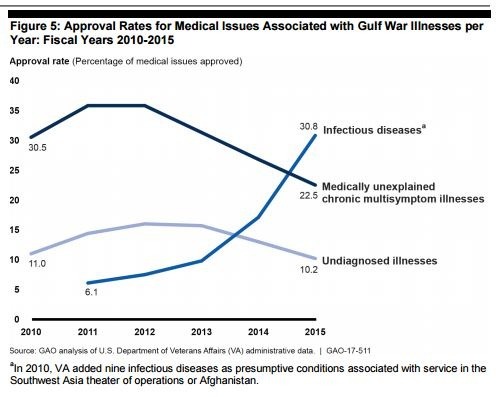 For each category of Gulf War Illness, the approval rates varied. Undiagnosed illness medical issues were approved at a rate of 13 percent; medically unexplained chronic multi-symptom illness issues at 29 percent; and medical issues related to the nine infectious diseases at 14 percent.

These claims also took longer to process than others. From 2010-2015, Gulf War Illness claims took about 4 months longer for the VA to complete than all other claims, averaging about 1 year compared to about 8 months. Though wait times have improved, Gulf War Illness claims completed in 2015 still took 270 days to complete, on average, which is more than twice as long as VA’s goal of 125 days.

According to officials, VA is not planning to correct this data from prior years, but promises updated guidance that will improve future reporting.

Why such low approval rates?

What explains the denial of so many Gulf War veterans’ claims? According to the GAO report, VA says it is because Gulf War Illness is confusing, and the staff who evaluate these claims struggle to understand how to process them. But it seems there are several reasons why VA staff may be confused about Gulf War Illness claims, including a lack of in-depth training on the topic and VA’s resistance to integrating recent and ongoing research on the topic.

An important part of the claims process is requesting a medical examination. Guidance from the Veterans’ Benefits Administration (VBA) states that a general medical exam (referred to as a Compensation and Pension exam, or C&P exam) must be requested for Gulf War Illness claims when there is evidence of a chronic disease and qualifying service in Southwest Asia.

The GAO found many different interpretations of VBA’s guidance among staff in the four VA regional offices they visited as part of the investigation. Additionally, two VBA reviews in 2015 and 2016 revealed that many claims had been processed incorrectly, due to VA claims staff failing to obtain a C&P exam for a veteran when it was necessary to properly evaluate the veteran’s claim.

In fact, as of February 2017, VA training data shows that only about 10 percent of its medical examiners had completed an optional Gulf War Illness training, leaving 90 percent of C&P examiners without the necessary knowledge to evaluate Gulf War Illness claims. GAO investigators noted that only a few of the medical examiners with whom they spoke recalled ever having completed this training.

And what does the training entail for these complex health issues? According to GAO, a 90-minute online course.

Both the National Academy of Medicine and VA’s Research Advisory Committee on Gulf War Veterans’ Illnesses have recommended that VA analyze data from its existing datasets in the near future to better understand (and better process) Gulf War-related health conditions. The VA included this as a strategic objective in its 2015 update to the Gulf War Research Strategic Plan.

But according to a VA official that spoke with GAO investigators, the agency still has not developed a plan to guide its review of existing medical datasets or to integrate information from recent and ongoing research on Gulf War Illness.

For veterans whose Gulf War Illness claims are denied, the path forward is not always made clear. Denial letters are supposed to identify specific reasons why a veteran’s claim was denied. Investigators found that VA’s decision letter denying benefits for Gulf War Illness claims used vague, abstract language that did not highlight specific issues or explain which methods of service connection were considered.

Unclear denial letters without specifics make it more difficult for veterans to successfully appeal claims. Veterans cannot identify the issues that must be addressed with additional evidence or explanation in the appeal. And it may be unclear whether VA claims staff properly applied the Gulf War Illness presumptions. With under-trained VA claims staff and medical examiners, it is critical that the veteran know which parts of the claims process were applied correctly and why their claim was denied.