According to a report from the Government Accountability Office (GAO), over 62 percent of troops discharged from the military for misconduct in recent years had a diagnosis of post-traumatic stress disorder (PTSD), traumatic brain injury (TBI), or another associated condition. Misconduct separations prevent many veterans from receiving VA compensation, leaving them at a loss for the very conditions that got them separated.

Congress mandated the GAO report after significant media attention suggested servicemembers were being separated for misconduct without taking into account mental health conditions or brain injuries that could have contributed to the behavior that led to the misconduct discharge. The report, published on May 16, 2017, confirmed these allegations.

Misconduct Separations and Prior Diagnoses 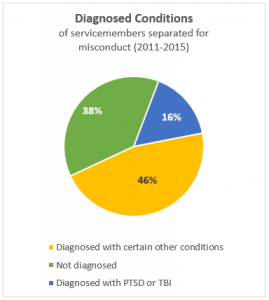 Other-Than-Honorable Discharges and Eligibility for Benefits

Additionally, about 13,000 of the 57,000 discharged for misconduct and diagnosed with a mental health condition or TBI, received an “other than honorable” discharge. Other than honorable characterizations of service make veterans potentially ineligible for health benefits from the Department of Veterans Affairs (VA). Though it is possible for veterans to request a discharge status upgrade, the report found that, in recent years, 87 percent of veterans with other-than-honorable discharges had not even applied for veterans’ benefits. 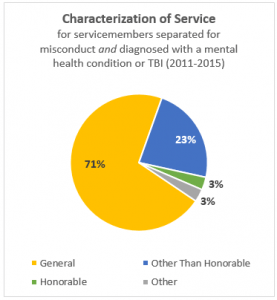 In response to high rates of TBI and PTSD and media attention, the Department of Defense (DOD) has strengthened and expanded its policies on screening servicemembers for TBI and PTSD before separation.

Screening for PTSD and TBI

Last week’s report, however, found that two of the four military branches’ policies were inconsistent with DOD policies related to screening servicemembers for PTSD and TBI. In the below table from the report, you can see whether each branch’s policies align with DOD’s in different situations. Investigators also noted that Army and Marine Corps did not always adhere to their own policies on screening for TBI and PTSD. For example, GAO found no evidence of PTSD or TBI screening in 18 of the 48 sample separation packets reviewed for Marine Corps servicemembers administratively separated for misconduct – that’s nearly 40 percent who weren’t screened.

Training for Detection of TBI and PTSD

The report also found that two of four service branches’ policies for training servicemembers were inconsistent with DOD’s TBI policy. DOD requires TBI early detection training for all deployed servicemembers. DOD has no policy, however, that requires training on how to identify the symptoms of PTSD.

Similarly, the Army and the Marine Corps may not have adhered to their own TBI and PTSD training policies. During interviews with Army officers GAO found that many had not received training to identify mild TBI (concussion) symptoms, despite Army policy that all servicemembers should be trained. Additionally, though sign-in sheets are used at the training courses, they do not maintain any other records of who has been trained.

Officers did report, however, that other efforts—beyond training courses–to build awareness of TBI and PTSD have been helpful. In particular, a DOD-wide initiative to have a mental health provider “embedded” in each unit has helped identify these symptoms in servicemembers under their command. The officers added that discussing a servicemember’s behavior with a mental health provider often resulted in a medical referral instead of initiating the process for a misconduct separation.