On Friday, December 7th 2018 the U.S. Court of Appeals for the Federal Circuit heard an en banc argument, meaning all judges from the court heard the case, on behalf of “Blue Water Navy” Vietnam veteran Mr. Procopio. En banc decisions are precedential, meaning these rulings affect the way similar cases will be adjudicated in the future.  At issue in Mr. Procopio’s case is whether the phrase “Republic of Vietnam,” as it’s written in Agent Orange presumption statutes and regulations, includes veterans who served in offshore waters during the Vietnam War. 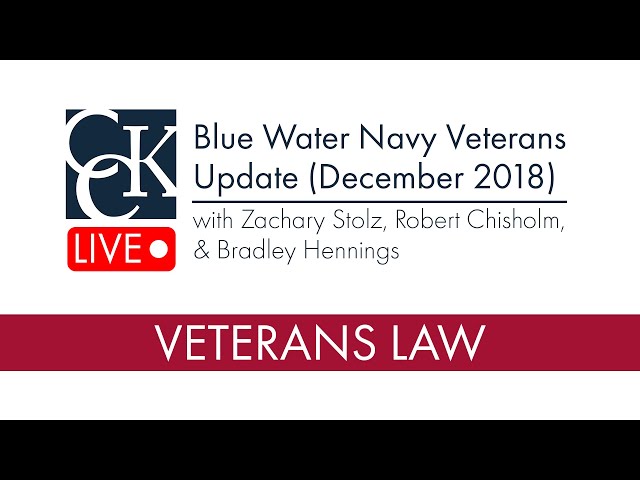 Why is the Procopio case important for Blue Water Veterans?

In his case, Mr. Procopio contends that service in the Republic of Vietnam—which entitles veterans a presumption of herbicide exposure if they served during a specific timeframe— extends into the territorial seas of Vietnam for up to twelve nautical miles seaward of the demarcation line. Historically, the Department of Veterans Affairs has only applied this presumption of exposure to veterans who served on the continental landmass.

Currently, VA recognizes that the following veterans are presumed to have been exposed to Agent Orange during military service in Vietnam between January 9, 1962 and May 7, 1975:

This means that Navy veterans who served offshore in “blue waters” and never set foot on the landmass of Vietnam are not included in the presumption of exposure. It is worth noting, however, that VA does provide a way to establish service connection for blue water veterans. These veterans have to show that they were exposed to herbicides on a facts-found basis by providing evidence of exposure.  If VA concedes that the veteran was in fact exposed to herbicides, then the veteran will be afforded the presumption of service connection for the list of conditions that VA associates with herbicide exposure.  Navy deck logs can serve as strong pieces of evidence to support these claims.

A principle piece of Mr. Procopio’s case relies on an Australian study, which determined it is ‘plausible’ that some Blue Water Navy veterans may have been exposed to the toxic dioxin TCDD—a combustion byproduct created during the production of Agent Orange. Australian studies have shown that distillation systems on-board Royal Australian Navy vessels—which take in sea water for sailors to drink, bathe in, etc.—may have actually enriched the TCDD instead of filtering it out. Because TCDD is so toxic and is associated with a number of health conditions, veterans are afforded a presumption of service connection for those conditions.

How did we get here?

For at least a decade, VA has held the position that when Congress passed the Agent Orange Act of 1991 with the language “Republic of Vietnam,” it exclusively was referring to the landmass. This position was upheld by the Federal Circuit in the case of Haas v. Peake in 2008, when the court deferred to VA’s interpretation of its regulations. As a result of this, VA promulgated a rule which essentially states only veterans who served on the landmass and inland waterways of Vietnam will be afforded a presumption of exposure. Prior to this time, however, VA had been affording the presumption of exposure to veterans who served in the waters offshore.

What happens if Procopio Overturns Haas?

On a basic level, many more veterans would be made eligible for VA disability compensation if this case is decided in Mr. Procopio’s favor. Estimates on the number of Blue Water Navy Vietnam veterans who served within twelve nautical miles seaward of the demarcation line range from 50,000 to 90,000. VA’s response to a decision such as this could be to promulgate additional rules that take it into account. Our hope is that these 50,000-90,000 veterans would become entitled to benefits based on a presumption of herbicide exposure, reducing their evidentiary burden when seeking disability compensation for some conditions. In our experience, the Federal Circuit usually takes between two and four months to issue a decision.

Currently, VA presumes that the following conditions are associated with exposure to Agent Orange:

We believe that regardless of the outcome in Mr. Procopio’s case, the issue will be appealed to the Supreme Court.

What is happening in Congress?

Despite passing the House of Representatives unanimously earlier this year, the Blue Water Navy Vietnam Veterans Act has stalled in the Senate. If this bill were to be passed, we expect it would have a similar effect to a favorable decision in the Procopio case. The main concern presented by opponents of the bill is the cost it may entail, estimated at over one billion dollars. Since the bill’s passage in the House, VA has vehemently opposed the bill’s advancement in the Senate citing a lack of scientific evidence.

UPDATE: Blue Water Navy Veterans who served offshore within twelve nautical miles from the line of demarcation of Vietnam are now eligible for the same presumption of exposure as Veterans with “boots on the ground” service in Vietnam.