On June 26, 2019 the Supreme Court of the United States issued a 9-0 decision in the case of Kisor v. Wilkie, Secretary of Veterans Affairs.  While we will not yet know how it will play out practically for the foreseeable future, it is a major decision in Veterans and Admirative law which can affect all different Federal Agencies from the Department of Defense, EPA and of course, the Department of Veterans Affairs.

Mr. Kisor is a Vietnam veteran who developed post-traumatic stress disorder (PTSD) from his military service, specifically as a result of his participation in Operation Harvest Moon.  While there was no immediate evidence available to confirm his involvement in this operation, there was an evaluation conducted at that time from a psychiatrist stating Mr. Kisor did not suffer from PTSD. When he originally filed for disability benefits in 1982, he was denied.  He refiled in 2006 at which time VA granted benefits based on a new psychiatric report.  However, VA only granted from the time he refiled his claim, not from the date he first filed, which he had specifically requested in his refiled claim.  Mr. Kisor appealed to the Board of Veterans’ Appeals.

While the Board acknowledged Mr. Kisor came up with two new service records confirming his involvement in Operation Harvest Moon, they found those records not “relevant” because they did not speak to the reason for denial of service connection to PTSD; the denial was due to lack of evidence placing him in a stressful event which triggered PTSD.  The Veteran appealed to the Court of Appeals for Veterans Claims, which affirmed the Board’s decision.  Mr. Kisor then appealed to the Court of Appeals for the Federal Circuit, which denied his claim based on deference to the Board’s interpretation of VA’s rule.  In this case, the relevant rule at hand is 38 CFR §3.156(c) regarding service records.  If relevant service records are submitted to a Veteran’s file, even if the claim has been previously denied, and these records should have been associated with the Veteran’s file at the time of the denial, VA is supposed to review the case and perhaps award retroactive benefits because it was its own mistake the records were not associated with the file. 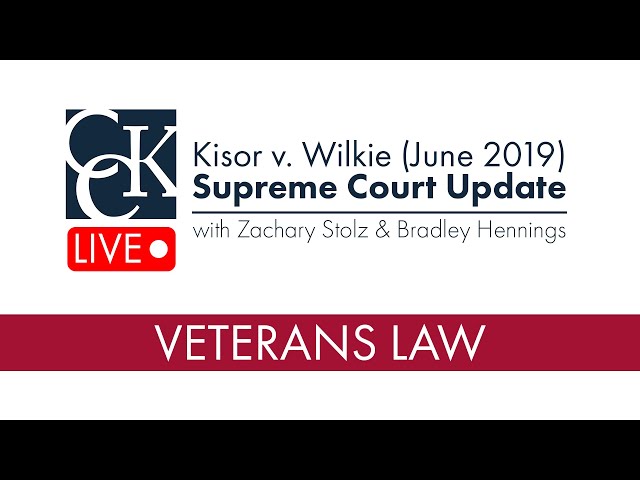 The main arguments in this case are in regards to what Mr. Kisor and his attorney submitted as evidence.  Do these records qualify as relevant? The Court now has to go back to what relevant means and who gets to decide the meaning.  The Supreme Court came back with a unanimous decision stating the lower Courts made a mistake.  The deference to agencies’ interpretation of their own regulations should only be afforded in very narrow, limited circumstances.  Ultimately, the Supreme Court stated the lower Courts erred in allowing this agency deference to happen.

When a case is decided based on an agency’s interpretation of its own rule, it could be dangerous.  For one, the agency could potentially alter its interpretation to suit their needs instead of implementing the rule to the degree it was intended.  Second, it could lead agencies to draft ambiguous rules instead clearly written rules if the agency knows they can interpret as needed later on.  It gives the agencies a lot of power because they could interpret their own rules, effectively removing the chief duty of the Court, which is interpreting the law.  The Court would thus lose the ability to limit and/or check the powers of the agency.

While the Supreme Court is not overturning the Auer deference, the judges wrote extensively as to why it was not applied appropriated in this case.  The Justices all agreed that Mr. Kisor deserved to win his claim, meaning that Mr. Kisor could potentially prevail on his claim for benefits.  As for now, the VA’s interpretations of its own rules will not be deferred to as they have been in the past.  Mr. Kisor’s case will be sent back to the Federal Circuit Court.