New Laws for Veterans and Servicemembers in 2021: NDAA 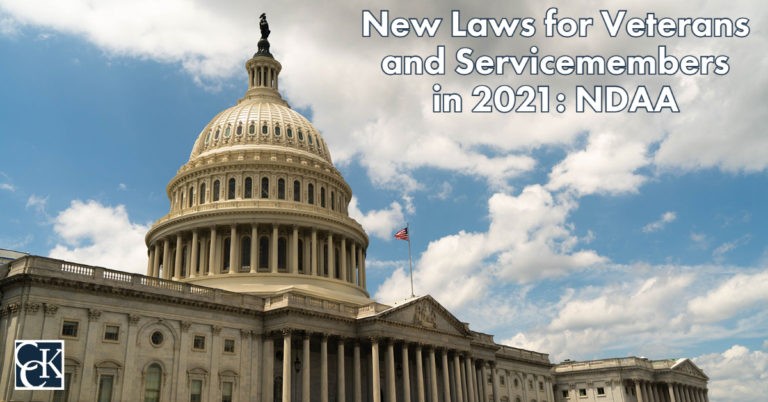 The 2021 National Defense Authorization Act was finalized near the end of 2020 and created several new provisions for veterans and service members.  Continue reading to learn more about the changes made by the 2021 NDAA.

What is the National Defense Authorization Act (NDAA)?

The National Defense Authorization Act, or NDAA, is a policy and spending bill for the Defense Department that passes through Congress every year.  Included in the new NDAA’s passing are several new improvements to pay and benefits for servicemembers, retirees, veterans, and military families.  The NDAA will bring new changes to areas including the Agent Orange presumptive list, exposure research, medical research, the GI Bill, improvements for women veterans, and pay raises.

Exposures and Medical Condition Policies in the NDAA

These three conditions have been added to the list of presumptive conditions for which VA grants service connection, typically in Vietnam War veterans who have been exposed to Agent Orange.  The addition of these conditions to the list effectively means that veterans will not have to provide as much proof when applying for a grant of VA benefits.

An estimated 34,000 Vietnam War veterans suffering from these conditions may now be eligible for benefits.  Typically, presumptive conditions are determined by VA, based on significant supporting evidence from scientific studies.  However, by including this measure in the NDAA, Congress effectively bypassed the VA and determined, by statute, that the three conditions should be added to the list.

The NDAA also included a measure granting certain veterans access to the VA Burn Pit Registry to help track exposures.  Specifically, this will impact more than 15,000 veterans who served at a secret Soviet-era airbase in Karshi-Khanabad, Uzbekistan, and may have been exposed to dangerous levels of radiation and other hazards.

This base was built on a former chemical weapons factory.  Testing of the site revealed radiation levels were 7-9 times higher than normal.  Of the 15,000 or more veterans who passed through the base, 2,500 of them have reported rare illnesses and cancers.  This group of veterans has been labeled the “K2 Veterans.”

The 2021 NDAA also included a requirement that more research about the veterans’ exposures must be conducted.  An executive order was also later signed which required VA and the Department of Defense to identify which toxins were found on the base, where they were found, and who might have been exposed.  The executive order also required identification of the health consequences related to K2 to make decisions on what conditions will be covered by VA.

The Deborah Sampson Act is included within the 2021 NDAA and is specifically designed to create improvements for women veterans.  Women veterans are currently one of the fastest-growing groups of veterans.  The bill is intended to remove many of the barriers that female veterans are facing and provide sweeping health care advances.

The bill will require VA to:

This list, however, is not exhaustive.  Veterans may read the full bill to learn more about the types of programs and benefits included in this act.

A caregiver is someone who may leave their job to take care of a veteran full-time due to the nature of the veteran’s disability.  In many cases, this person is a family member of the veteran.  With the passing of the NDAA, the TEAM Veteran Caregiver Act requires that VA formally recognize the caregivers of veterans in their health records. 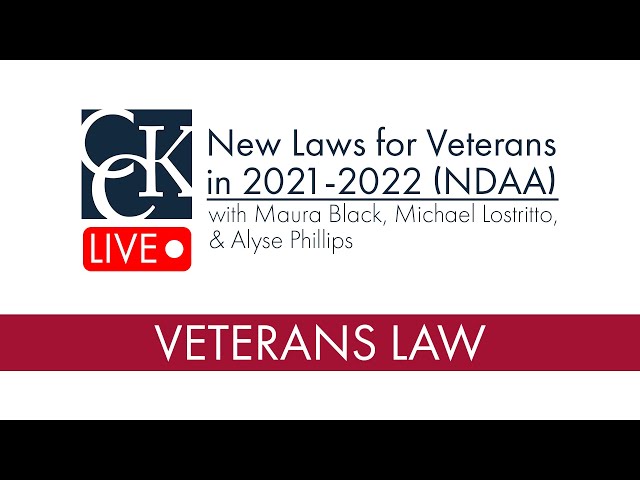 Changes to Veterans Benefits in the NDAA

Dependency and Indemnity Compensation (DIC) is a monthly benefit the Department of Veterans Affairs (VA) awards to a surviving spouse or dependent child(ren) of a service member who:

In order for a spouse to be eligible for DIC benefits, the spouse must have been:

Additionally, for DIC benefits, the spouse typically must not be remarried, with a few exceptions.  Another way a spouse may preserve DIC benefits after remarriage is if the remarriage occurs after the spouse reaches a specific age.

Previously, the minimum age a spouse would need to be to remarry and preserve the DIC benefits from their marriage to the veteran was 57.  However, under the new NDAA bill changes, that age has been adjusted to 55-years old.  If a spouse remarries after the age of 55, the DIC benefits from their previous marriage to the veteran will continue with the remarriage, as long as the spouse meets all the other qualifications for DIC benefits.

Disability Benefits Questionnaires (DBQs) are fillable forms created for veterans’ use in the VA disability evaluation process.  One way DBQs may be used is to allow private doctors to list information about a veteran’s condition, their medical disabilities, their severity, or their relationship to service.  This information can be crucial to the success of many VA disability claims.  In 2020, VA removed public-facing DBQs from its website.  The 2021 NDAA required that VA make these forms available for public use again.

An overpayment occurs when VA determines that they have paid a veteran more than they are owed, whether that be relating to a service-connected disability or dependency benefits for a spouse the veteran is no longer married to or a child that has aged out of the window for benefits.  When VA determines an overpayment has occurred, it will attempt to collect that overpayment back.  In these instances, the veteran will likely receive a notice from the Debt Management Center calling for the collection of debts resulting from the overpayment.

The Veterans Debt Fairness Act, which is included in the 2021 NDAA, limits VA’s authority to collect overpayments of benefits from veterans.  This may provide extended relief from veterans and could reduce the number of veterans who receive notices regarding overpayments.

Through the 2021 NDAA, the amount of healthcare-related research VA will be conducting is set to increase.  Among the conditions which will be studied more closely are:

This is important because of the frequency with which these common conditions occur in the Veteran community.

Benefits for Current Service Members or Those Transitioning Out of Service

Previously, in order to be eligible for the home loan program, a National Guard member would need to have served for 90 consecutive days on active duty.

This new legislature makes Guard and Reserve members deployed under Title 32 (federally funded, but state-controlled deployment) who have at least 90 days of service, with 30 of those days being consecutive, eligible for the home loan program.

Under the 2021 NDAA, changes have also been made to the GI Bill.  The GI Bill provides educational assistance to servicemembers, veterans, and their dependents.  The new changes will affect those eligible for this benefit.

Congress approved a 3 percent military pay raise, effective January 1, 2021.  This nearly matches the 2020 pay raise of 3.1 percent, which was the largest pay increase for servicemembers in 10 years.  Congress also approved a raise in Hazardous Duty Incentive Pay (HDIP) from $250 to $275 per month for duty in a foreign area designated as an imminent danger area of high-risk duties.