New Laws for Veterans and Servicemembers in 2022: NDAA 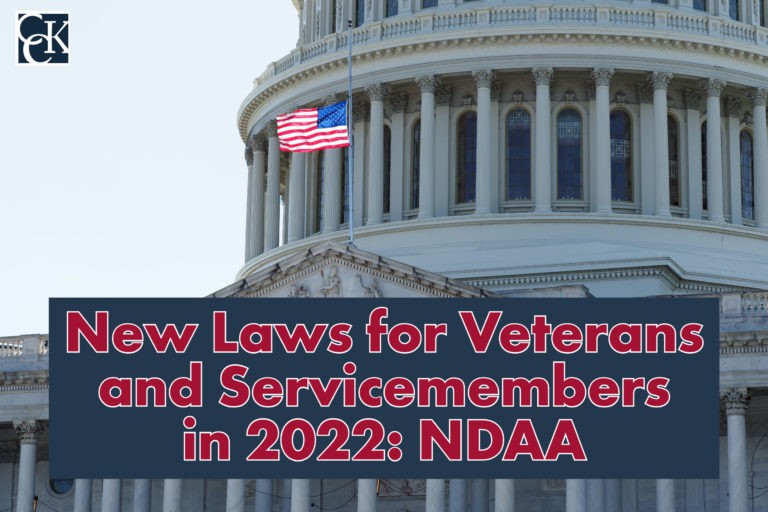 Every year, Congress passes an updated National Defense Authorization Act, or NDAA.  The NDAA is an annual bill that authorizes military funding for the Department of Defense (DoD) and provides guidance on how the funding can be spent.

President Biden signed the 2022 NDAA into law on December 27, 2021.  The 2022 bill authorizes about $770 billion for the military, and includes several provisions that will greatly benefit veterans and service members, such as:

Provisions in the bill will revamp how the military prosecutes cases of sexual assault.  Specifically, Congress created prosecutor positions (i.e., the Special Trial Counsel) to handle cases of sexual assault and related crimes, as well as murder, manslaughter, and kidnapping.  This means these cases will no longer be handled by military commanders.

The 2022 NDAA ensures that prosecutors are trained, equipped, and qualified to handle sexual assault cases.  In addition, the bill makes sexual harassment its own offense under the Uniform Code of Military Justice.  It also requires independent investigations with specified timelines of any complaints of sexual harassment.

The 2022 NDAA includes a pair of bills that will bring sweeping reform to the military’s use of burn pits.  The two bills are:

The NDAA also contains several acts that intend to improve veterans’ access to medical treatment for certain service-related conditions.  The following are included in the 2022 NDAA:

The 2022 NDAA also addresses the Electronic Health Record Modernization (EHRM) program.  Senators are requesting more transparency from the Department of Veterans Affairs, requiring regular updates about the costs and schedule for the EHRM program.

Essentially, Congress is looking for an end to the string of poor audit reports on the EHRM.  Auditors found that VA previously underreported costs for the project by as much as $5 billion.

The Department of Veterans Affairs Information Technology Reform Act of 2021 was passed as part of the NDAA.  This bipartisan legislation aims to increase transparency and accountability through Congressional oversight into proposed and current information technology systems and management at VA.

As part of the NDAA, Congress authorized a choice location on the National Mall in Washington, D.C. for the Global War on Terror Memorial.  This memorial will serve as a lasting tribute to the courage and sacrifice of those who served in the nation’s longest conflict.

Other Bills Related to Veterans

In addition to the bills and reforms mentioned above, the 2022 NDAA includes several more acts related to veterans, including: 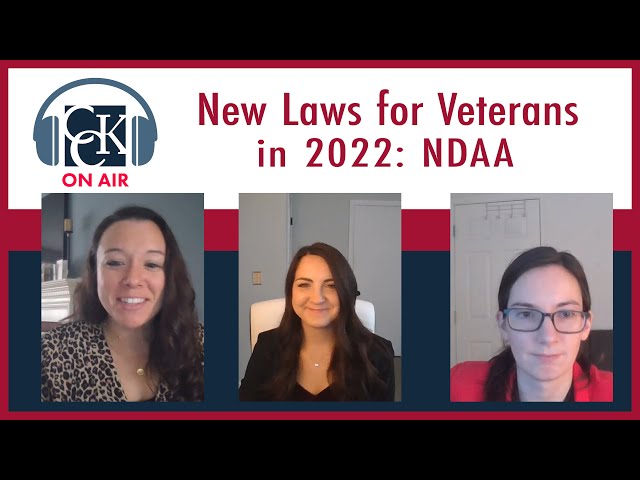 Perfluoroalkyl and Polyfluoroalkyl substances, or PFAS, have been connected to various health issues including some cancers, liver damage and decreased fertility.  Often referred to as “forever chemicals,” they tend to not break down and to stay in the human body indefinitely.  PFAS have been used to make non-stick cookware, stain resistant fabrics, cosmetics, some firefighting foams, and products that resist grease, water, and oil.

New regulations in the 2022 NDAA require the Department of Defense to publish results of drinking and ground water PFAS testing conducted on or near military installations or former defense sites so they are publicly available.

Service members may also see a boost in their housing benefits.  The Defense Department is raising its basic allowance for housing by an average of 5.1 percent in 2022.  This is a big increase compared to the last two years, which came in at just under 3 percent.

The NDAA includes a provision to extend GI Bill protections for student veterans still forced into remote classes by the ongoing COVID-19 pandemic.  This extension, which was originally set to end on December 21, 2021, will now continue through summer 2022.

GI Bill benefits will also be expanded to include select National Guard and Reserve duty statuses.

By the end of next year, new military parents will be eligible for 12 weeks of paid family leave following the birth or adoption of a child.  Although service members already had access to family leave, the amount varied between types of military service, and some members received as little as two weeks.  This new provision standardizes paid parental leave across all military services.

Additionally, new military moms who are the primary caregiver may receive 12 weeks of leave in addition to their 6 weeks of convalescent leave for a birth or adoption.

Chisholm Chisholm & Kilpatrick LTD is nationally recognized for helping disabled veterans secure the benefits they deserve.  If VA denied your claim for disability compensation, CCK may be able to help.  Call 800-544-9144 to schedule a free consultation with a member of our team.

Additionally, for more information about 2022 NDAA bill in its entirety, veterans can reference this official summary.  Veterans can also read about the 2021 NDAA provisions here.