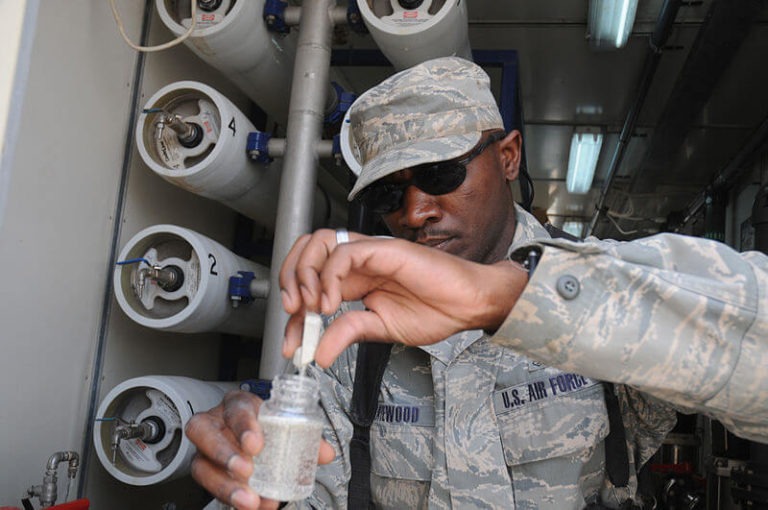 What are Per- and Polyfluoroalkyl Substances (PFAS)?

PFAS are a broad class of chemicals developed in the 1940s that can be used to repel grease and water.  Such chemicals have been used across industries for decades to extinguish fires where petroleum-based explosions pose a danger.  In the 1970s, the Department of Defense (DoD) began using a firefighting foam (i.e. aqueous film forming foam or AFFF), which contained PFAS.  This firefighting foam was primarily used to put out aircraft fires.  Importantly, these chemicals move quickly through the Earth and into the water, where they persist indefinitely.  Some scientists have classified them as “forever chemicals” and a growing body of research has shown that they cause harmful health impacts.  In recent years, there has been increasing concern regarding the potential presence of PFAS in the drinking water at military bases.  As a result, both DoD and the Environmental Protection Agency (EPA) have launched investigations to address this issue.  Specifically, DoD is looking into the extent of PFAS contamination and how to mitigate the damage by doing the following:

Current Findings of the Ongoing Investigation

According to DoD, about three million people in the United States receive drinking water from DoD public water systems, which are to comply with EPA and state health-based regulations.  EPA and DoD have detected elevated levels of PFAS in drinking water at or near military installations.  Specifically, 25 Army bases, 50 Air Force bases, 49 Navy or Marine Corps bases, and two Defense Logistics Agency sites have tested higher than acceptable levels for the chemicals in either their drinking water or groundwater sources.  Additionally, DoD tested 2,668 groundwater wells both on and in the surrounding off-base community and found that 61 percent of them tested above the EPA’s recommended levels.  DoD has already spent roughly $200 million studying and testing its water supply, and also providing either filters, alternate wells or bottled water to address contamination.  However, clean up will take years for groundwater sources, and will be added to DoD’s environmental cleanup responsibilities.  Deputy Assistant of Defense for Environment, Safety and Occupational Health, Maureen Sullivan, estimates that this cleanup will add about $2 billion to the $27 billion previously identified cleanup projects for which the department is responsible.

Going forward, DoD’s priority is to address the PFAS-contaminated drinking water at military bases to protect the personnel living and working at the installations and the surrounding communities that have also been impacted.  In addition to an investigation, DoD has also initiated the removal of firefighting foam with PFAS from its supply chain.  EPA also announced that it will start work by the end of the year on a long-awaited plan to set national drinking-water limits for PFAS.  The proposal is described by EPA as the “first-ever nationwide action plan” to address the health effects of these human-made chemicals.  There are currently no federal regulations on the production or monitoring of PFAS, despite the studies that show they can linger in the body for years, leading to adverse health outcomes.

The Senate Report accompanying a bill for national defense authorization for fiscal year 2017 included a provision for the United States Government Accountability Office (GAO) to review DoD management for drinking water contaminants.  GAO released its first report “DoD Has Acted on Some Emerging Contaminants but Should Improve Internal Reporting on Regulatory Compliance” in October of 2017.  The report examined the extent to which DoD has:

GAO found that despite its investigation into PFAS-contaminated drinking water, DoD had not internally reported all data on compliance with health-based drinking water regulations.  Specifically, the military departments did not report all violations to DoD (i.e. while 77 installations reported violations, GAO found that at least 16 installations did not).  GAO determined that until DoD takes steps to increase the clarity and understanding of its internal reporting requirements within its investigation, it may not have the data it needs to fully oversee compliance.  The report does recognize that DoD has restricted its use of firefighting foam containing PFAS and is currently funding efforts to develop a new foam that meets DoD’s performance requirements.

Nonetheless, GAO made five recommendations to improve DoD’s reporting and use of data regarding PFAS-contaminated drinking water, with which DoD concurred.  Overall, GAO proposed identifying and implementing any necessary changes to DoD’s environmental compliance policy to clarify DoD’s reporting requirements for violations of health-based drinking water regulations.  Additionally, GAO suggested improved communication and additional training for personnel on military installations to increase understanding about such reporting requirements.  GAO has since released another report revisiting DoD’s progress and efforts in both its investigation and its response.