The Fully Developed Claims (FDC) program is an optional way to file your claim for disability compensation, pension, and survivor benefits. A veteran can opt to file a fully developed claim when he or she has all the evidence they would like VA to consider when deciding the claim.   Upon submitting the claim, the veteran certifies that there is no additional evidence needed, thus enabling VA to make a decision more quickly.

It is important to note that veterans should be sure that they have collected all the evidence that they want VA to consider in its decision.  This is because the concept of a Fully Developed Claim essentially signals to VA that there is no additional evidence the veteran needs to support their claim.

How is Filing a Fully Developed Claim (FDC) Different Than a Regular VA Claim?

The FDC process differs from filing a traditional claim in the way in which evidence is developed and acquired. Ultimately, the standard manner of developing and acquiring evidence can correlate to longer wait times for a decision.

In the standard claims process, a veteran files a claim which triggers a development process so VA can gather the required information to decide the claim as part of its duty to assist. In this process, VA has more responsibility to obtain the information required to support veterans’ claims.  Despite this increased responsibility to obtain information, VA can also take significant time to collect the evidence which can add to the amount of time it takes the veteran to receive a decision.

If the veteran wishes to opt into the Standard Claim Process, they will want to specify that on VA Form 21-526EZ by marking the box under Item 1 at the very top of the form.

Contrarily, a Fully Developed Claim is submitted with all the necessary evidence, meaning that VA does not have to do any additional development for the veteran and can, in theory, issue a decision sooner than if they had to go obtain the evidence.

Why You May Want to File a Fully Developed Claim (FDC)

An FDC requires that you do the development work of gathering evidence to support your claim, a task that traditionally falls to VA.   However, for veterans who are concerned about long processing times for their claims, filing an FDC may be the best option.

The FDC allows the veteran to control the evidence gathering part of the claims process. The veteran gathers all evidence, including military records and medical records, and certifies that they are submitting all of their evidence at once.

You may be concerned that you will forget to submit a piece of evidence, but the FDC program is risk-free. If you discover additional evidence to support your VA claim, you will still be able to submit that new evidence.  However, the claim will then be placed into the Standard Claim Process upon this submission.  Additionally, if VA determines that more evidence is required, the claim will also be moved to the Standard Claim Process.

If this is the case. VA will notify the veteran that his or her claim cannot be processed as an FDC claim and will be processed as a standard claim. This can add delays to a claim, but it is better that a decision be made with all evidence rather than without.

What Kind of Claims Can You File as Fully Developed?

Veterans can file multiple kinds of claims in the FDC program, including claims for disability compensation, pension, claims to reopen a claim, and claims for secondary service connection. Importantly, veteran’s surviving spouses and dependents may also file for survivor benefits as Fully Developed Claims. 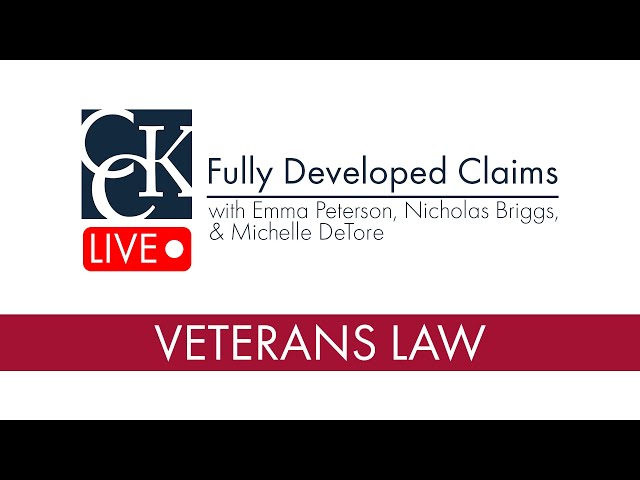 Advantages and Disadvantages to Filing a Fully Developed Claim

Fully developed claims are not for everyone.  VA’s evidence requirements can be confusing to understand and difficult to meet, so it may be beneficial to have VA assist you in gathering evidence. Reasons an FDC might not work for your claim:

How to File a Fully Developed Claim

VA has provided a checklist to follow when filing your FDC, but to sum it up:

Reasons Might VA Exclude a Claim from the FDC Process

As mentioned above, VA might determine that additional evidence or development is needed to adjudicate a claim that has been filed as an FDC.  If so, VA will notify the veteran that the claim is being transferred to the Standard Claims Process.  Below are some additional reasons why the VA may reject a claim from the FDC process:

If after filing your FDC you received an unfavorable decision or denial from VA, the team at Chisholm Chisholm & Kilpatrick LTD may be able to help.  Our veterans’ attorneys have helped thousands of veterans through the appeals process.  Call us today at 800-544-9144 for a free case evaluation.