The Department of Veterans Affairs offers certain benefits to eligible surviving spouses, children, and parents of deceased veterans. Such benefits include Dependency and Indemnity Compensation (DIC), Survivor’s Pension, and burial benefits.  In today’s discussion, attorneys Bradley Hennings and Jenna Zellmer are joined by VA Accredited Claims Agent Michelle Detore to explain some of these programs, and the eligibility requirements for each. 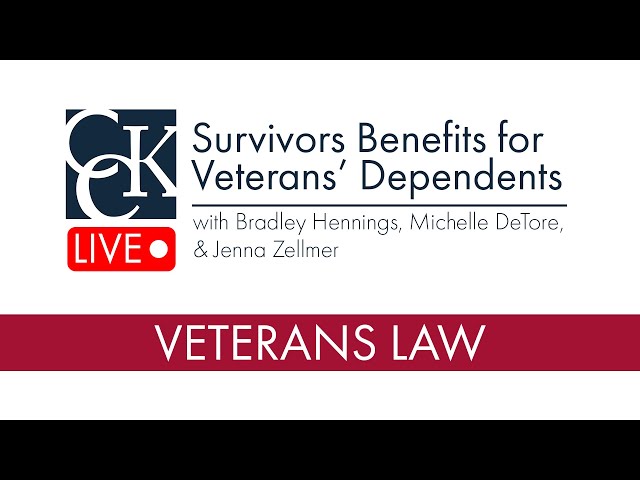 Dependency and Indemnity Compensation is a tax-free, monthly benefit dispersed to surviving spouses, children, and sometimes parents of veterans whose death was related to military service or a service-connected condition. You can find the monthly benefit amount paid to survivors on VA’s website. Survivors are not paid the same monthly amount that the veteran was receiving at his or her time of death. Dependency and Indemnity Compensation has its own exclusive rates.

For their survivors to qualify for Dependency and Indemnity Compensation, veterans and servicemembers must meet one of the following criteria:

Generally, if a surviving spouse remarries before the age of 57, their Dependency and Indemnity Compensation will be terminated. Surviving spouses who remarry after the age of 57 are eligible to continue receiving these benefits. If a remarriage does occur, but it ends in divorce, annulment, or death, DIC benefits can be restored.

Surviving children of veterans may qualify for DIC benefits in some scenarios as well. At the time of the veteran’s death, the child must be:

DIC benefits can be available to dependent parents of a deceased veteran in certain situations, but this benefit operates differently than the program offered to surviving spouses and children—it is a need-based benefit. To determine if a parent qualifies for DIC benefits, an assessment of their income will be conducted to ensure they do not surpass the income limit. By “income” this includes not only what the parent earns, but all of their assets (such as property) as well—including a 401k or IRA.

The term “parent” for VA’s purposes include biological, adoptive, and foster parents. To further clarify, a “foster parent” is defined as an individual “who stood in the relationship of a parent to the veteran for at least one year before the veteran’s last entry into active service.”

How to Apply for Dependency and Indemnity Compensation

Seeking DIC benefits from VA can be a complicated and confusing process—if you feel as though some guidance would be beneficial, we encourage reaching out to a Veteran Service Organization, VA-accredited claims agent, or VA-accredited attorney. Seeking assistance can ensure all of the proper forms are completed and necessary evidence is submitted.

That being said, the formal application for DIC benefits is VA Form 21P-534EZ. If filing for cause of death, indicate this on the form. With your application form, try to submit as much substantive evidence as possible, such as the veteran’s death certificate, marriage certificate (if applicable), and any divorce decrees from prior marriages. Dependent children should submit their birth certificate in every scenario, and school/college transcripts if over 18 and attending full time. VA requires the aforementioned documents applicable to your situation, thus, submitting these documents along with your application form can help to speed up the adjudication process, as VA will likely request them anyway.

VA’s Survivor Pension program is a tax-free, needs-based financial benefit reserved for low income surviving spouses and children of deceased veterans with wartime service. The veteran does not have to have been service connected for any conditions while he or she was alive for the dependents to qualify for Survivors Pension. Instead, there are service requirements:

Similar to DIC benefits for surviving dependent parents, this benefit is based on yearly family income.