Burial Benefits for Veterans and Eligibility 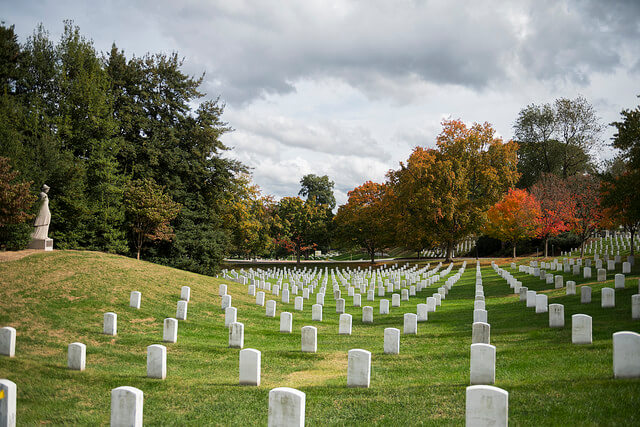 Certain veterans and their dependents are eligible for burial benefits through VA based on a number of criteria. There are two types of burial benefits: the burial itself, and compensation for the costs of the burial. Both have specific eligibility requirements and are handled by two different entities within VA: the National Cemetery Administration (NCA) and Veterans Benefits Administration (VBA).

What Is the National Cemetery Administration (NCA)?

The National Cemetery Administration (NCA) is a department within the Department of Veterans Affairs (VA) that maintains 136 national cemeteries in 40 states. They also handle burial benefits for veterans and their spouses/dependents.

According to their website, the NCA handles “opening and closing of the grave, perpetual care, a Government headstone or marker, a burial flag, and a Presidential Memorial Certificate, at no cost to the family.” However, they DO NOT provide funeral or cremation arrangements. These must be made by the family, or whoever is planning the funeral, and these costs will not be paid for by the NCA.

In the event that a veteran wishes to be buried in a private cemetery, not one managed by the NCA, VA will still provide a headstone, marker, or medallion; burial flag; and Presidential Memorial Certificate.

The NCA also offers burial benefits for spouses and dependents, including “burial with the Veteran, perpetual care, and the spouse or dependent’s name and date of birth and death will be inscribed on the Veteran’s headstone, at no cost to the family.” For cases of spouses or dependents that pass away before the veteran, they are still able to receive burial benefits.

Eligibility for burial in a VA national cemetery is handled by the National Cemetery Scheduling Office, and a determination of eligibility will only be made after a veteran requests a burial.

According to NCA’s website, the following are eligible for burial at a VA national cemetery:

According to the NCA website, spouses and dependents that fall into the below categories are eligible for interment:

Can Veterans Be Buried in Arlington National Cemetery?

What Is the Veterans Benefits Administration (VBA)?

The Veterans Benefits Administration (VBA) is the arm of VA that handles veterans’ compensation. This part of VA is separate from the NCA, and does not manage cemeteries or burial arrangements. However, they do offer certain burial benefits by way of compensation.

The VBA offers a benefit called a “Burial and Plot Interment Allowance,” a flat rate of compensation for an eligible veteran’s burial and funeral costs. The amount varies depending on several factors, such as whether the veteran’s death was service-connected or non-service-connected, as well as if the veteran was hospitalized by VA at the time of their death. This VA fact sheet has more information on compensation amounts.

According to VA’s website, for a veteran’s survivors to be eligible for burial benefits, a veteran must have received a discharge that is under conditions other than dishonorable, and meet at least one of the following conditions:

Survivors of the Veteran

According to VA’s website, the following are eligible to receive burial benefits: