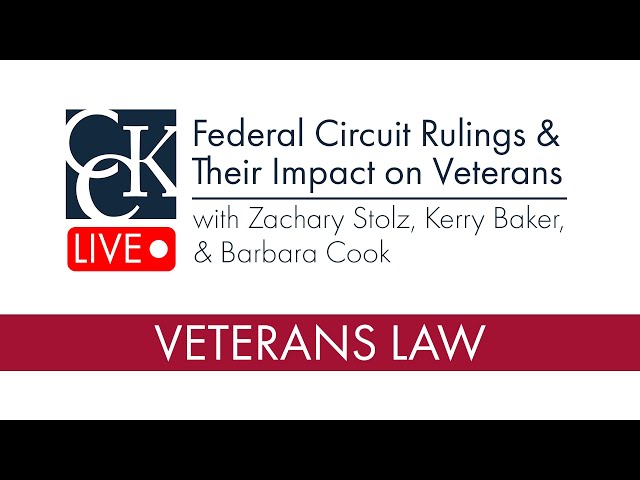 What Is the Court of Appeals for the Federal Circuit?

Acree v. O’Rourke: When Is a Claim Considered Withdrawn?

The issue stems from his testimony at a hearing before the Board for several disability claims. At the hearing, the Veterans Law Judge decided that the Veteran had withdrawn seven of his eleven disability claims, and these seven claims were then dismissed. When the case appeared before the Board following the hearing, the Board decided that the veteran’s waiving of his claims was explicit and unambiguous.

What Is the Standard?

The standard for determining if a veteran withdrew his or her claims is outlined in the case DeLisio v. Shinseki. DeLisio states that a veteran’s withdrawal of his or her claim is not to go into effect unless the withdrawal “is explicit, unambiguous, and done with a full understanding of the consequences of such action on the part of the claimant.” Acree argued the Board only decided that his withdrawal was explicit and unambiguous, but it did not address the third part of DeLisio: that the veteran fully understood the consequences of the action. Acree argued that the Veterans Law Judge at the hearing “did not explain…the consequences of withdrawing any of the claims at issue.”

At the CAVC, Acree argued that he did not voluntarily withdraw those disability claims, and asked that the CAVC remand his case back to the Board to make a decision on those seven claims. CAVC denied the Veteran’s request, stating that the Board’s determination was sufficient.

The Federal Circuit ruled that the Board did not properly apply the standard of determining if the Veteran withdrew his claims, and stated that the Board was incorrect in applying only two of the three criteria. In Acree, the Court appeared to limit its ruling to claims that are withdrawn during a hearing. The Board must now show that a claim withdrawal meets each of the three criteria in order for the claim to effectively be considered withdrawn.

The case of Martin v. O’Rourke included many appellants, not just the veteran for whom the case is named, John Martin. The Court consolidated the case because the question before them was also before the Court in several other cases. The issue in front of the Court in this case has to do with writs of mandamus and whether the length of the VA appeals process constitutes an unreasonable delay in a veteran’s case. Writs of mandamus are orders from a court to a lower government official or entity that orders them to fulfill their official duties properly. Writs of mandamus are typically filed by veterans when action has been pending on their case at a local VA regional office for long periods of time.

As many veterans are aware, VA can take years to finally decide a veteran’s claim for benefits, and Martin deals almost exclusively with how long cases are taking before VA, and when veterans can file a writ for an unreasonable delay in their case.

The appellants in this case previously argued before CAVC that their cases have been unreasonably delayed by VA. CAVC dismissed their cases, and the appellants then appealed to the Federal Circuit stating that CAVC used the wrong test in deciding whether they were entitled to help from CAVC in mandating that VA take action on their case.

CAVC used the standard of, in order to secure a writ of mandamus, the appellants had to show that VA was arbitrarily refusing to act on their cases, and that the delay was not just the result of an overburdened system.

The Federal Circuit ordered CAVC to use a six-part test to weigh the different factors in determining if a writ of mandamus is warranted in a case. The six-part standard was first laid out in the decision of Telecomms. Research & Action Ctr. v. FCC (“TRAC”). It states that there are six factors relevant to the question of whether a writ is warranted:

This ruling holds that CAVC must now look at multiple different factors when looking at a case for a writ of mandamus.