Chronic bronchitis is a serious respiratory condition often associated with chronic obstructive pulmonary disease (COPD) in which the bronchial tubes, the pathways that carry air to the lungs, become inflamed.  This inflammation usually results in a cough that expels mucus, but other symptoms can include difficulty breathing and tightness of the chest.  Chronic bronchitis may be diagnosed using lung function tests, x-rays, and blood tests.

Veterans may be eligible to receive VA disability compensation for chronic bronchitis if they can prove that their condition was caused by military service.  When veterans experience a condition that is not presumptively related to their time spent in service, they must establish service connection.  To establish direct service connection for chronic bronchitis, a veteran must have:

Once a veteran files a claim for bronchitis, VA may request a Compensation and Pension exam, or C&P exam.  These exams are very important, as VA uses them to make informed decisions regarding the veteran’s conditions.  Additionally, VA may deny a veteran’s claim if they fail to attend the examination.

When attempting to schedule the exam, VA may call the veteran or mail a letter.  As such, it is crucial to ensure that VA has the most up-to-date contact information, so that the veteran does not miss any C&P requests.

The exam will usually be performed by a VA contracted physician.  Before the exam, the examiner will review the veteran’s c-file.  This will contain any documentation that has been previously submitted to VA, as well as the veteran’s medical and service records.

The veteran may also use a DBQ, or Disability Benefits Questionnaire, to bolster their claim.  A Disability Benefits Questionnaire is a form created by VA that allows the veteran to address important aspects of their condition, such as symptoms, severity, and possible causes, as well as the relationship between their condition and other disabilities.  The veteran may also have their private doctor fill out a DBQ for them.

VA has a general respiratory rating system that is used to rate bronchitis and many other respiratory disorders.  A rating is assigned based on how well the lungs take in air, absorb oxygen into the blood, and then exhale.  Lung function tests, including spirometry, are used to evaluate a veteran’s level of disability.

Several different measurements will be taken when spirometry tests are performed.  Each of these tests is gauged by the results of average people of your same height, weight, and age.

The U.S. Military used burn pits as part of their waste disposal protocol in places such as Iraq and Afghanistan in the post-9/11 era.  While the practice was effective in reducing large quantities of waste, burn pits emitted plumes of toxic smoke, which was often carried for miles by the desert wind.

Many U.S. Military veterans have suffered health consequences from burn pit exposure.  Most of the negative effects involve temporary ailments of the respiratory system, though some evidence suggests a link between burn pit exposure and the long-term deterioration of lung health.  As such, veterans who were exposed to burn pits have experienced chronic bronchitis.

Research continues to be done to link burn pit exposure to a variety of different conditions, such as cancers and respiratory conditions.  However, research has indicated that one of the known chemical compounds released by burn pits includes the dioxin called TCDD which was also found in Agent Orange.

In August 2022, the Honoring Our PACT Act expanded presumptive service connection for veterans who were exposed to burn pits and other toxins during their military service.  In order to be eligible, the veteran needs be considered a “covered veteran.”  A covered veteran is one who served:

As of August 2, 2021, VA began processing disability claims for asthma, rhinitis, and sinusitis on a presumptive basis based on presumed particulate matter exposures.  Veterans will only be eligible for this presumption if they meet certain criteria, including service in Southwest Asia and other specified areas and manifestation of asthma, rhinitis, or sinusitis within 10 years of a qualifying period of military service.  Many veterans exposed to burn pits during their service and developed one of these three conditions may be able to seek service connection under this new presumption.

Despite this new presumption, VA does not have a consistent approach to deciding these cases, so lay evidence from veterans is key to winning burn pit and other toxic exposure claims.  VA has no method of proving veterans were near burn pits, so statements from the veteran themselves or buddy statements can help provide necessary details. 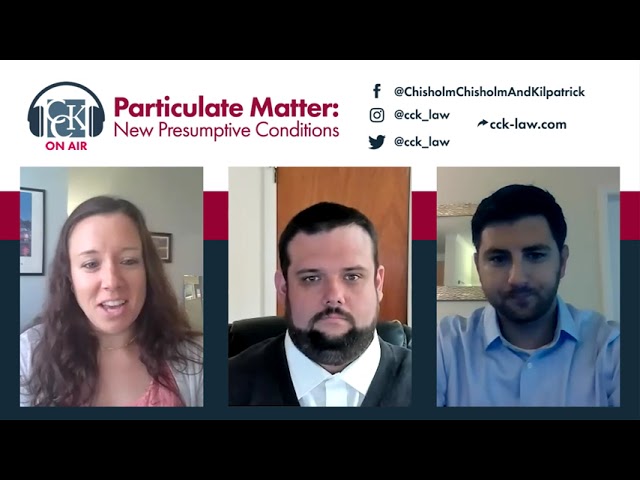 Veterans with multiple conditions may have a combined rating which would make them eligible for TDIU.  As a result, veterans who receive a rating for their bronchitis, or a condition linked to their bronchitis such as COPD, may be able to receive compensation at the 100 percent rating level through TDIU.

Getting Assistance if Your Claim for Chronic Bronchitis Has Been Denied

As claims for respiratory conditions are among the most filed, they are also among the most commonly denied.  If your claim for chronic bronchitis has been previously denied, the veterans disability team at Chisholm Chisholm & Kilpatrick LTD may be able to assist you.  For more information, as well as a complimentary case review, contact us at800-544-9144.