For VA disability claims, a presumption can work in two ways: (1) by establishing exposure during service, or (2) by linking a disability to service.  VA creates presumptions to facilitate the VA disability claims process for veterans, often making it easier to receive benefits.  A presumption of exposure means that if a veteran has qualifying service, meaning they served in a specific area during a defined timeframe, VA will presume that they were exposed to certain harmful chemicals or environmental hazards.  Presumptions of exposure replace the service connection requirement of an in-service event that caused their disability.  In these instances, VA counts the in-service exposure as the event.  A presumption of service connection is when VA presumes a veteran’s condition was caused by their military service.  The presumption of service connection takes the place of the medical nexus requirement required for service connection (i.e. a link between an event during the veteran’s service and their current condition).  Overall, VA has several presumptions that apply to different groups of veterans, including Gulf War veterans and Vietnam-era veterans who served in Thailand.

VA’s Stance on Agent Orange Use in Thailand

Hudick v. Wilkie took place at the Federal Circuit and involved the use of Agent Orange in Thailand.  VA acknowledges that between February 28, 1961 and May 7, 1975, there was significant use of herbicides, including Agent Orange, on the fenced perimeters of certain Royal Thai Air Force Bases in Thailand.  As a result, VA will concede herbicide exposure on a facts-found basis where a veteran can establish by “credible evidence” that he served near the perimeter of a particular Air Force base, including but not limited to U-Tapao, Ubon, Udorn, and Takhli.  Importantly, VA revised its Adjudication Procedures Manual M21-1 (M21 Manual), which VA relies on to adjudicate cases, to reflect this policy.  Although VA does not presume herbicide exposure for Thailand veterans, the presumption of service connection for an herbicide-related condition will apply the same way it does for Vietnam veterans once a veteran proves on a facts-found basis that he was exposed to herbicides during service.

Mr. Hudick is a United States Air Force veteran whose service included one year at the Udorn Royal Thai Air Force Base from 1967 to 1968, during which time he worked in the munitions storage area.  After service, he filed a claim for service connection for prostate cancer, one of the presumptive conditions associated with Agent Orange exposure.  Mr. Hudick stated that his work-related duties regularly brought him in contact with the perimeter of the base.  Although the Board of Veterans’ Appeals deemed his report credible, it denied his claim on the basis that such evidence alone was not enough.  Furthermore, the Board asserted that regardless of if he placed himself on the perimeter, the historical data showed that herbicides were not used in Thailand until long after Mr. Hudick was at Udorn.  CCK responded to the Board’s decision by appealing to the CAVC.

At the CAVC, CCK argued that the Board erred when it required further evidence to corroborate Mr. Hudick’s credible statement that placed him on the perimeter of the base in Thailand.  However, the Court rejected that argument and determined that the Board was not required to follow the M21 Manual policy that requires VA to concede exposure on a direct, facts-found basis as described above, because there was other evidence demonstrating that herbicides were not used at the base during his time there.

CCK continued to appeal to the next superior court, the Federal Circuit, arguing that VA should not have been allowed to ignore its internal policies to deny service connection despite the fact that Mr. Hudick credibly reported that he served on the perimeter of the Udorn base.  Essentially, CCK asserted the M21 manual helped Mr. Hudick’s case and therefore, the Board should follow it.  The Federal Circuit found that the Board had previously remanded Mr. Hudick’s case for consideration of the M21 Manual provisions and the policy that deals with conceding exposure when an Air Force veteran credibly says that he or she was near the perimeter.  In sending the case back for development based on that policy, the Board became bound by it and required to adjudicate Mr. Hudick’s claim in line with it.  Ultimately, the Federal Circuit reversed both the CAVC decision and the Board decision, directly ordering VA to award service connection for Mr. Hudick’s prostate cancer.

The favorable decision in Hudick v. Wilkie was not precedential, meaning neither VA nor appellants can rely on it as law.  However, it was decided before three judges at a very high court and thereby gives a good indication of where the Court stands on the issue of Agent Orange in Thailand.  As such, both veterans and veterans’ representatives can use this case to persuade VA to follow the proper procedures in similar cases. 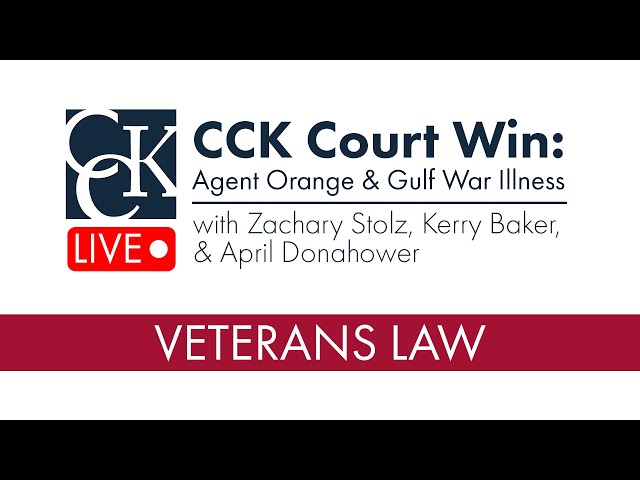 Stewart v. Wilkie took place at the CAVC and dealt with presumptive service connection for Gulf War veterans who have a medically unexplained chronic multisymptom illness (MUCMI).  Within VA’s regulations, specifically 38 CFR § 3.317, a MUCMI is defined as a diagnosed condition with less than conclusive pathophysiology or etiology.  Here, pathophysiology is a disruption of function in the body while etiology is the underlying cause of the condition.  Importantly, the use of the word “or” in VA’s regulation indicates that veterans can have either an unknown pathophysiology or an unknown etiology in order to be eligible for presumptive service connection.

Mr. Stewart served in the United States Army from December 2003 until February 2005, including service in Southwest Asia from February 2004 to January 2005.  During his time in service, Mr. Stewart was surrounded by burn pits and exposed to smoke from burning waste, as well as sand and dust.  Following service, he filed a claim for service connection for asthma and later attended a VA medical examination to address whether his condition could be classified as a MUCMI.  The examiner concluded that it was less likely than not that Mr. Stewart had a MUCMI because the etiology of asthma is “partially understood”.  The Board of Veterans’ Appeals denied Mr. Stewart’s claim on that basis.

CCK responded by appealing to the CAVC, arguing that the Board misinterpreted the law and relied on an inadequate VA examination to deny Mr. Stewart’s claim.  Specifically, asthma in general may have a partially understood etiology, but it can also be without conclusive etiology too.  Furthermore, the examination only discussed signs and symptoms of asthma as opposed to the etiology of the disease.  VA then took the position that a MUCMI is a diagnosed illness that lacks both a conclusive pathophysiology and a conclusive etiology – a stance that is in stark contrast to the plain meaning of the regulation.  CCK further argued against VA’s interpretation of the regulation, contending that a MUCMI is a diagnosed illness that lacks either a conclusive pathophysiology or a conclusive etiology.

Ultimately, the CAVC agreed with CCK that the plain meaning of the regulation is that a multisymptom illness is a MUCMI if either the etiology or the pathophysiology of the illness is inconclusive.  The Court also concluded that the determination of whether an illness is “medically unexplained” is particular to the veteran in each case, and therefore must be made on case-by-case basis.

Stewart v. Wilkie is so significant because it is one of the first precedential cases that has come out dealing with the presumptions afforded to Gulf War veterans.  Prior to this decision, VA was applying the law in a way where a veteran’s diagnosed illness had to be a complete mystery in regards to both pathophysiology and etiology.  This strict interpretation seriously limited the benefits awarded to Gulf War veterans.  However, this case established that Gulf War veterans only need to fulfill one of the two requirements (i.e. unknown pathophysiology or unknown etiology) in order to satisfy the definition of a MUCMI and get service-connected on a presumptive basis.  This decision is also very important because VA was previously looking at a disability as a whole without looking at a particular veteran’s disability for an explanation.  Overall, this decision helps pave the way for Gulf War veterans to receive the service-connected benefits they deserve.