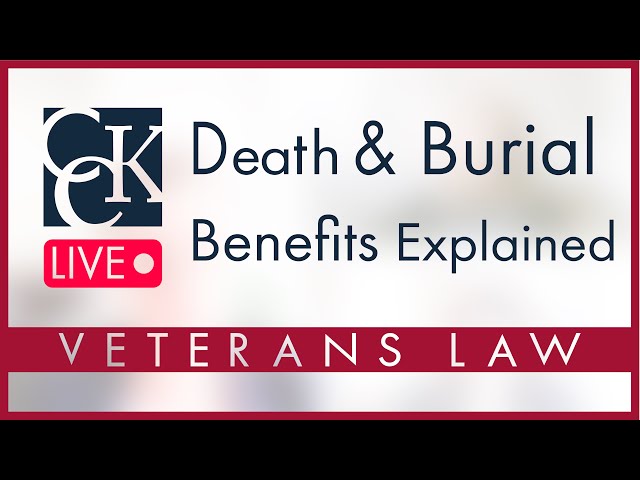 So, we’re going to be talking about VA death and burial benefits.  So, obviously, a difficult subject here involving the death of a veteran.  But we think it’s important that both veterans and people close to them, their family members and things like that, understand these benefits so they can use them when and if the time comes.

So, just simply, really high-level death benefits are when a veteran dies, there are a number of different benefits that are going to be available to the dependents.  Dependents are spouses, parents, children, and things like that.  The benefits range everything from compensation to healthcare to insurance coverage and survivors’ benefits.  And we’re going to get into each and every single one of those right now.  But to start with Kayla, do you want to talk a little bit about the compensation that can be available to survivors?

Kayla D’Onofrio: Sure.  So the first benefit we’ll talk about is Dependency and Indemnity Compensation, or DIC for short.  DIC is a tax-free monthly benefit that’s dispersed to surviving spouses, children, or sometimes parents of veterans under certain circumstances.

One thing that’s important to note about the DIC benefit is that it’s not the same monthly amount that a veteran was receiving at the time of his or her death. DIC is its own exclusive rate that does get adjusted annually based on the cost of living fluctuations for that year.  As of December 2020, the fixed monthly amount for DIC is $1357.56.  In some cases, that could be a lot more than what the veteran was receiving after the time of their death.  In other cases, it may, unfortunately, be less.

Now, if a claimant is trying to prove a DIC claim, there is a couple of different ways to obtain this benefit.  The first would be to establish a service connection for the cause of death, which basically means that you have to show that the veteran’s death was caused or was caused or a veteran’s service-connected disability may have caused or contributed to their passing.  And you can do that in a number of different ways.

One way would be to have a death certificate that shows a service-connected disability as a cause or contributory cause of their death.  Other ways might be medical evidence or medical opinion that kind of speaks to that theory, as well.  The other way that surviving spouse might be able to obtain the DIC benefit would be if the veteran was rated at 100% or was receiving TDIU for the 10 years preceding their death, and the surviving spouse was married to the veteran for those same 10 years.  They would still be able to obtain DIC without necessarily having to prove that the veteran’s death was related to their service or a service-connected disability.

To qualify for DIC benefits, both veterans and service members as well as the surviving claimant – the spouse, the child, or the parent – does have to meet certain eligibility requirements.  We’re not going to go into too much detail today about what those different requirements might be.  But we do have a blog post on our website that goes into a lot more detail about all of that.  So, I definitely recommend checking that out and will include a link for that as well.

In order to apply for DIC benefits, claimants do have to use a specific VA form, just like any other claim that VA does require a specific form.  That form is VA form 21-534 or 534EZ, which is a little bit of a shorter version of that form.  The form does ask if you are trying to obtain DIC based on service connection for cause of death.  So, if that’s the theory you are working under, just make sure you are checking off that box accordingly.

We also recommend including as much substantive evidence as possible, which might include documents confirming your relationship to the veteran, such as a marriage certificate or birth certificate.  The veteran’s death certificate, like I mentioned before, especially if it does show that one of their service-connected disabilities caused or contributed to their death.  Or, if you do have any other medical evidence like I said, that does kind of speak to the theory of service connection for the cause of death, showing treatment for disabilities, or a medical opinion about their service-connected disabilities and how they contributed to their death around the time of their passing.

Christian: Great. So DIC is one way that survivors can get compensation.  It’s not the only way.  Alex, do you want to hit another way that potential survivors could get some compensation?  Talk about survivors’ pension or death pension.

Alex Gamache: Yeah.  So, survivors’ pension is a tax-free needs-based financial benefit reserved for low-income surviving spouses and children of deceased veterans with wartime service.  The veteran did not have to be service-connected for any conditions while alive for the dependents to qualify for survivors pension.  However, the veteran did have to have the following service requirements.

Veterans who served prior to September 7, 1980 must have served for at least 90 days during active duty military service, with at least one day during a wartime period.  Veterans who served after September 7, 1980 must have served for two years or the time frame for which they were ordered to serve, with one day during a wartime period.  And lastly, the veteran must have been discharged under conditions other than dishonorable.

Christian: So, I like to think about DIC and this survivor’s pension or monthly payments that are made to eligible survivors, sort of moving forward from, unfortunately, the veteran’s death.  But that’s not the only way that survivors can potentially get compensation, right?  Do you want to talk a little bit about substitution, and then I’ll talk about accrued benefits, Alex?

Alex: Sure.  So, when a veteran passes away while a claim for VA disability benefits is still pending, an eligible individual may be substituted into the veteran’s case to continue on the claim for benefits.  If this occurs, the claim will proceed as normal as if the veteran were alive, and that individual can submit additional evidence in support of the appeal or the appeals that are pending.  Like a claim for DIC and accrued benefits, eligible dependents must apply for substitution within one year of the veteran’s death.  To apply for substitution, it’s VA form 21-0847.

Christian: So, substitution is really just you’re stepping into the shoes of the veteran to continue to prosecute the claim to completion.  Another potential way that someone who substituted into a case could get compensation that was due to the veteran is accrued benefits.

So, accrued benefits are benefits that are due but are not paid prior to a veteran’s death.  Eligibility for this is very dependent upon whether the veteran had a claim pending or is otherwise entitled to benefits at the time of their death right.  Let’s say the veteran was looking for an earlier effective date for post-traumatic stress disorder.  They, unfortunately, pass away.  The spouse is eligible for substitution.  They do what they need to do to get in place of the veteran.  Then, VA decides that there’s a way earlier effective day warranted.  The money that should have gone to the veteran is now going to go to the properly substituted spouse.

So, this works a little bit different than sort of getting into the veteran’s shoes and substitution moving forward.  If you’re going for accrued benefits, it’s only based on the evidence in the file at the time of death.  For accrued benefits to be on the table, there must have been a claim for benefits that were not yet decided at the time of the veteran’s death.  If the claim was decided, the appeal period for that claim must not have expired.

To apply for accrued benefits, we just want to point this out to avoid any confusion, it’s the same form as used for DIC benefits.  This type of monetary compensation, like I noted at the beginning, isn’t the only benefit that potentially can flow to surviving spouses.  Do you want to talk a little bit about Health Care, Kayla?

Kayla: Sure.  VA will provide health care coverage for spouses of certain totally disabled veterans.  Whether that means they were at 100% for their combined rating at the time of their death or were receiving TDIU benefits.  Either would be eligible.  They do provide this benefit under the Civilian Health and Medical Program, or CHAMPVA for short.

One thing to note is that being found permanently and totally disabled is not necessarily the same thing as just having a 100% rate or TDIU.  It is a separate finding that VA would make at the time that they were to grant the 100% rating or TDIU benefits.  So, just something to be aware of.

With CHAMPVA, spouses of disabled veterans are covered for certain supplies or services when VA deems that they are medically necessary and were received from an authorized provider.  Some examples of the things that CHAMPVA might cover would be things like mental health services, ambulance care, or sometimes hospice care.

Christian: Great.  Another benefit that we’re going to talk about, basically for the rest of the presentation here are burial benefits.  Do you want to take it away, Alex?

Alex: Yeah. So when a veteran passes away, families have a few unique benefits available to them.  Surviving spouses, and dependents, may qualify for allowances to help pay for a veteran’s burial and funeral costs.  So, the first one we’re going to talk about is the veteran’s burial allowance.

VA offers veterans burial allowances to help families pay for the burial and funeral costs that would not be reimbursed by any other organization such as a government agency or the veteran’s employer.  There are eligibility requirements for both the veterans and those seeking the veteran’s burial allowance, which can be found on VA’s website that we’ll link below.  If you are eligible, you may receive a number of different benefits.  These can include VA burial allowance for burial and funeral costs, VA plot or interment allowance for the cost of the plot or interment, VA transportation reimbursement for the cost of transporting the veteran’s remains to the final resting place.

Christian: Another benefit that we wanted to make you aware of is the National Cemetery Administration, the NCA, has a benefit that’s available to spouses of veterans to help them with burial services.  So, when a veteran spouse passes away, they may be eligible to be buried in a National Cemetery.  They’re eligible for this benefit even if the veteran has already passed away.  It allows the spouse to have their name and date of birth engraved on the veteran’s headstone and also guarantees perpetual care of their gravesite.  S,o we have a blog post on this.  And we’ll put the link below if you want some more information on that.

Kayla: In addition to those benefits, there are a few other things that spouses or surviving family members may be able to request.  The first would be a US Flag to have draped over the veteran’s casket, as well as a Presidential Memorial Certificate to honor the veteran’s service.

To honor a veteran, service member, or an eligible family member, the following may also be available.  You can receive a grave, a headstone, a marker, or a government medallion.  There are certain eligibility criteria for all of these other benefits as well.  VA’s website does include the full criteria to try to obtain any of these benefits or receive any of these benefits for the veteran or surviving family member of the veteran. That’s listed on VA’s website, like I said, on va.gov.

Christian: Well, I think that’s all we have for today.  Thank you very much for joining us. And, as always, more information can be found on our blog.  And don’t forget to subscribe to our channel.