Dependency and Indemnity Compensation (DIC) is a tax-free, monthly benefit paid to a surviving spouse, children, and sometimes parents of a veteran whose death was related to military service or a service-connected condition.  Survivors are not paid the same monthly amount that the veteran was receiving at their time of death.  DIC has its own exclusive rates (see section below).

In order for survivors to qualify for DIC benefits, veterans and service members must meet one of the following criteria:

Additionally, VA will allow an unmarried veteran’s surviving spouse to collect DIC benefits if they:

As mentioned above, DIC has its own exclusive rates, which tend to increase annually with VA’s cost of living adjustment (COLA).  In 2020, DIC benefits saw a 1.6 percent increase.  This year, in 2021, DIC rates will see a 1.3 percent increase.  As such, the monthly DIC rate will now be $1,357.56 effective December 2020.  Importantly, dependents may also be eligible for added amounts based on certain factors, including the following: 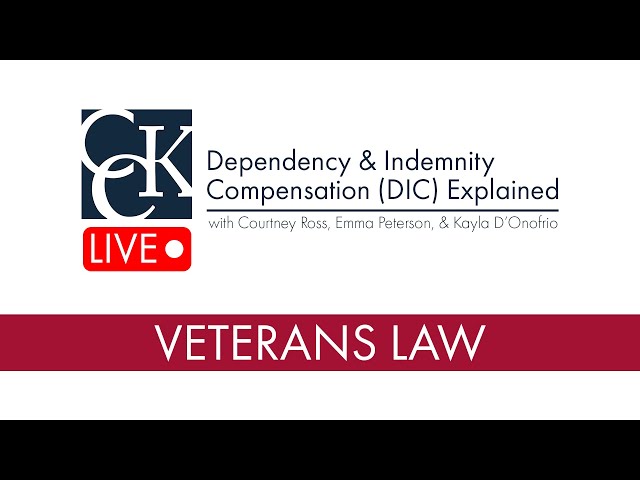 How to Calculate DIC Payment Rates

Again, if you are the surviving spouse of a veteran, your monthly DIC rate would start at $1,357.56.  Then for each additional benefit you qualify for, you would add the amounts from the “Added Monthly Amount” column in the table above.

For example, if you have two children under the ages of 18 and qualify for the 8-year provision and Aid & Attendance, your total monthly payment for the first two years following the veteran’s death would be as follows:

+ $289.00 (transitional benefit for the first 2 years after the veteran’s death)

How to Apply for DIC Benefits

The formal application used to submit a claim for VA survivors benefits is Form 21P-534EZ, Application for DIC, Death Pension, and/or Accrued Benefits.  This document is eight pages long and contains 12 sections.  Along with this application form, it is important to submit as much substantive evidence as possible, such as the veteran’s death certificate, marriage certificate (if applicable), and any divorce decrees from prior marriages.

Dependent children should submit their birth certificate and school/college transcripts if over the age of 18 and attending school full time.  VA requires the aforementioned documents when applicable and therefore, submitting these documents along with your application form can help expedite the adjudication process.

Importantly, applying for DIC benefits can be a very lengthy and difficult process.  As such, it may be beneficial to seek assistance from a Veteran Service Organization, VA-accredited claims agent, or VA-accredited attorney.  Seeking assistance can ensure all the proper forms are completed and necessary evidence is submitted.